THE BRIDGE AT SCHWEINBEREICH. A BG FOTR SCENARIO

Below is a quick 'almost-historical' scenario I wrote up for a Battlegroup game of FotR I had planned. The game has been fought and a full AAR is being prepared, but in the meantime, I thought I post up the scenario details and the forces we both chose for the game. I would be playing the attacking US forces.

The Brigde at Schweinbereich
US forces must cross the Grungraben river and capture a bridge at the small farming hamlet of Schweinbereich. The German forces in the area are already retreating back towards the Rhine, but have left a small rearguard force to hold this bridge for as long as they can and delay the American’s pursuit. The US forces must force a crossing of the river, capture the bridge and clear the village of enemy resistance to allow a swift pursuit of the retreating German forces.

The Battlefield
The village (represented by 6-7 buildings along the road) includes a church and a school. Between the village and the river is open scrub fields with long grass, bushes and a few trees. Around the village are a few hedged enclosures, mostly used for cow pasture. The river is crossed by a girder bridge and the road is walled and partially hedged from the bridge to the village. There are more trees and hedges along some of the river banks.

The Grungraben is fordable, but with some difficulty. It counts as dangerous terrain to infantry and vehicles, but can also be spanned by a light (or heavy) bridging unit, or by infantry in assault boats.

Deployment
The Germans initial defenders deploy anywhere on the their side (east) of the river. They may include defences.

The Americans initial attackers deploy anywhere on their side (west) of the river.

Reinforcements
The German player rolls a D6 and selects this many units as his reinforcements, these start the game off the table and arrive from the eastern table edge from turn 5 onwards at the rate of D3 units per turn.

The American player rolls a D6 and selects this many units as his reinforcements, these start the game off the table and arrive from the western table edge from turn 3 onwards at the rate of D3 units per turn.

Special Rules
Low Visibility: The US attack starts in the dawn’s semi-darkness and is preceeded by a smoke screen fired from supporting mortars, to enshrouded the entire hamlet, bridge and river bank. For the first D6 turns of the game only Area Fire is allowed, unless units are within 10” of eachother, in which case they may use Aimed Fire but with an additional -1 to spotting tests. On the last smoke turn rolled all shooting returns to normal but with an additional -1 to spot all units. After this turn, shooting returns to normal - the smoke has now cleared and the morning sun is up.

Scrub Land: Between the village and the river is rough scrub land (used for grazing pigs), its hummocks, long grass, bushes and few small trees provide infantry with soft cover, but they count as in the open for observation tests. It does not count as obscured for vehicles.

Assault Boats: US infantry can be equipped with plywood M2 assault boats to paddle over the Grungraben. Each boat holds up to 12 men and their equipment, and moves at 3” per move on the river. Men inside count as in the open whilst in the boats. Each M2 assault boat costs +2 points for the infantry platoon or squad using it. Destroyed boats do not incur the lost of any BR from taking counters.

Forces
The Germans select 600 points from the Defenders of the Reich list. They may include Defences.

The US may select 600 points from the US battlegroup lists for 1945. 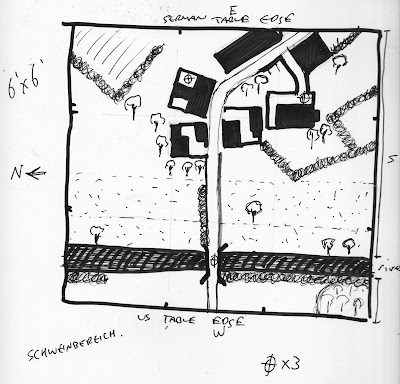 Alternative Theatres and Forces
This is a generic scenario, set in Germany in 1945, but it could easily be moved to any other theatre. Reverse the situation, with the US rearguard holding the bridge and river and Germans attacking and set it during the first days of the Battle of the Bulge, the smoke screen could become thick morning fog.

The US forces could readily be replaced by Russian or British 1945 forces without changing anything else.

My plan here was to use the M5s and armoured infantry as a very fast flying column to race straight up the road and into the village on turn 1, using the smoke screen as cover, to then cause as much havoc in the village as possible and force the Germans to fight me there, whilst my infantry paddled or waded across the stream, under supporting fire from the M45 'meat-chopper', P-47's bombs and mortars. The flying column would be a suicide mission, but it would eat up a lot of German orders and disrupt his defences, thus buying time for my infantry to cross the river and open ground and close on the two objectives, hopefully in overwhelming numbers and using their 'fire superiority' rule to keep the German defenders's heads down. The FHQ would spot for the mortars from the safety of the far river bank, with his comms team close at hand.

Fusilier patrol on bicycles with a pzfaust 35 1 scout, mortar spotter

The German's poor infantry would give up the river bank and opt to hold the village houses instead, and the fortified buildings of both objectives. The bridge would be well covered though, with a minefield on the road at the eastern end, a timed artillery strike, demolition charges in place for turn 2 and an obstacle blocking the road, in turn covered by the dug-in Pak38. The Tiger ('the beast of Schweinbereich') would be the mobile reserve, ready to move to meet the biggest threat. The Goliaths (an odd choice) were to be a weapon of last resort, hidden away, but in place to rumble out and attack if either of the objectives fell, blowing them sky high once the Americans were in place (nasty surprise, typically shabby Nazi trick). Their only problem was morale, the poor infantry and defences provide not much BR, could they hold out, even with the Feldgendarmes on hand to install so extra fighting spirit? The Auxiliary platoon were Russian POWs,  reluctantly forced back in into the line.