The Bridge at Schweinbereich, an AAR

Well, after the Germans defenders had deployed first my plan was already in ruined. It had survived even getting my models on the table. The minefield at the far end of the bridge meant that my flying column of M5s and infantry in an M3 would most likely be destroyed before they got anywhere near the village. I desperately needed a mine clearance option. The irony here was that my first list had included a combat engineer team in an M3, instead of the armoured infantry, specifically to clear mines, but later I forgot their primary role and swapped them later in favour of the extra firepower of the armoured infantry, and now I couldn’t clear the road. Plan A would not work, I would have to improvise and adapt on the hoof for a Plan B.

So, my fast light armour went into reserve, with the infantry now attacking as the first wave, second platoon north and first platoon south of the bridge, which I would largely ignore. The armour, when it arrived, would now have to provide extra suprressing fire and cross the river by wading. The advance was going to be far slower that I planned, and I wouldn’t be making best use of the smoke cove. Still, if the infantry moved fast, then they should cross the open ground before the smoke cleared and left them exposed to a lot of MG fire in the open. The smoke was lasting 5 turns, so I was in with a chance.

My infantry set off, wading north of the river and paddling like crazy to the south. My M45 meat-chopper had no targets in range (rubbish deployment) so I needed to move it, it hitched up to its jeep to get to a better firing position. My CO called in his mortars on the PRTP, and destroyed the horse and limber tow for the anti-tank gun, whose dug-in position saved it (several times during the game, althoug it never fired a shot).

In the smoke and darkness the  enemy’s return fire wasn’t too bad, only a few pins. So far, so good…

I pressed on, still wading the river, whilst first platoon hit the far bank and all scrambled out in the cover of the bushes.

German fire was sporadic, although the first timed 105 strike hit near the bridge and a direct hit wrecked my meatchopper and its jeep… bum, not a shot fired… the bridge demolition charges also went off - kaboom! No more bridge. Oh well, I wasn’t using it anyway as I suspected it would be wired to blow. The engineers could come and fix it after I’d cleared the village. More worryingly, the Tiger rolled out into the fields on my left, with clear lines of fire into my infantry, armed only with a few bazookas to try and get into range to reply. The beast had to be dealt with.

On turn 3, my first reinforcements arrived. The light tanks. Could the M5s take on the Tiger? Hell, no… but I had nothing else to even try. Their HE area fire could cause suppression, as I had no hope of a penetrating hit. So, this would be their task uneviable task, fire everything and anything they had to keep that Tiger pinned. The Stuarts arrived, lined up the Tiger, and began winging HE shells. They pinned it, hurrah! The David and Goliath duel had begun. My P-47 swet in, drooped its bombs wildy (seems fair enough) and caused some pinning, but tat was it. Still, cheap counter on the Germans, they didn’t like that.

The next turns progressed with my infantry scrambling forwards and laying down as much area fire as they could, scoring good pins on the German MGs which had to be removed with more counters, but in return their 80mm mortars had found their range and were starting to hurt. Casualties from mortar fire, and constant, irritating pinning were a problem. On the upside, I pulled an ‘Out of Fuel’ counter and the Tiger suddenly found itself stuck - admitted stuck in a good firing position with lots of targets though. But, with all three M5s firing HE, then swiching to AP on area fire when the ammo ran out, they did keep the Tiger pinned every turn. David was winning (well at least getting a draw).

One infantry squad grabbed their bazooka and bravely dashed to get a side shot at the pinned, fuel-less Tiger, only to be spotted by an MG team on covering fire, which wiped them out, ouch… (infantry supporting tanks, it works), also, a stray mortar round scored a direct hit on my Forward HQ, lurking in the bushes on the river bank. With some good dice, I the hit wiped them out. The Captain was gone, and so was my communications network command re-roll every turn, an officer, any chance to tactically co-ordinating, etc… suddenly the radio net was very quiet. A stroke of hideous luck that would be very costly (and cost me 2 BR counters as well).

Still, it was close (ish) on counters taken… and I had a far higher BR. But then, the smoke cleared.

Turn 6 and my GIs of first platoon had closed right up to the hedges, but suddenly German MG fire, previously sporadic and just causing pinning, started to sweep the field. 4 MGs lashed the first platoon from the hedges, the church and the buildings. My return fire could not pin them (good cover saves from the Germans being a theme in this battle). My southern attacked turned into a bloodbath, squads were scythed down and the survivors broke and ran. The first platoon was gutted, only 7 men were left standing, and they pulled back, out of range, to the river bank. My counter stash was sudeenly growing very fast (about 6 counters had been added).

The M5s also disasterously failed to pin the Tiger for a turn, and it was free to open fire, smashing one M5 (my officer) with an 88 round… now the odds of keeping it pinned were against me. David was now loosing to Goliath. I just had to push on, to try and get my infantry into some better cover. My second platoon moved forwards, moving and firing as they went, and the M3 half track splashed over the river to lend its troops too, only for it to eat another 88 shell next turn and leave the men inside pinned and bloodied. My last bazooka team was machine gunned and lost. The Tiger had become an impervious bunker. All looked lost…

Except, I pulled the Endkampf counter. Lucky… but the Hiwi auxiliaries were obviously in no mood to fight on, and the Germans took 3 counters… suddenly he looked very worried, and in a tell-tale move, stopped unpinning his units. I also scored a mortar round direct hit on his resupply RSO, which had driven onto my PRTP (he forgot about it). A massive explosion shook the village as all the tracked truck’s extra 88 rounds went off at once. The German commander looked pained. All his good work was being undone. 1 more counter, 1 more counter, and my GIs would not have shed their blood for nought.

But, it was his turn, and his platoon commander took over directing the mortar fire onto my northern attack. Another direct hit, more casulaties on a BAR squad and they then rolled another 1 for morale and broke, heading back to the river… it was the final counter that broke me… drat. It had been a bloodbath for me. One and half platoons gutted. German casulaties were very light, but he was only 4 BR from breaking himself. 1 or 2 more counters would have finished him.

A very close fight (in BR), but a one sided kicking in actual men lost. Schweinbereich had held out, the Americans have to find another way round (or just call up the USAAF and flatten the place).

Here are some snaps of the game in progress. A thoroughly enjoyable game, 4 hours (with break for bacon butties and some chatting). 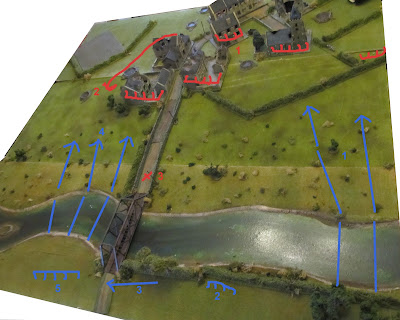 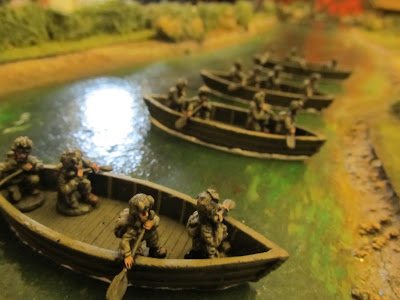 First platoon paddle for victory... old Britannia models (I know airborne crew... the shame!), second time ever used in a game, in about 15 years... well worth the time and £s. (They once paddled the Waal in a Rapid Fire game). 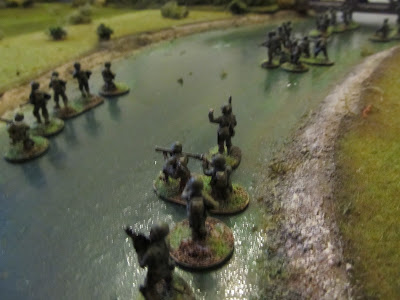 Second platoon wade to victory. No boats for you guys, time to get wet. 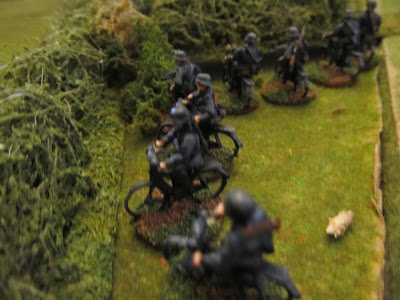 Bicycle-mounted Fusiliers in the hedges on my right, calling in mortar fire, the sneaky scouts. Their MG proved devastating too when it opened up at short range. 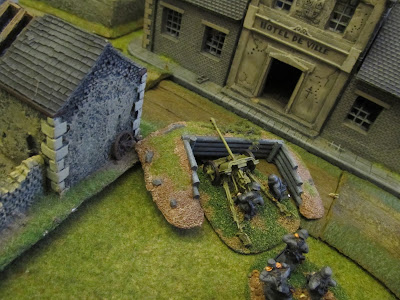 Pak 38 dug-in covering the main road. Not an option I could use. 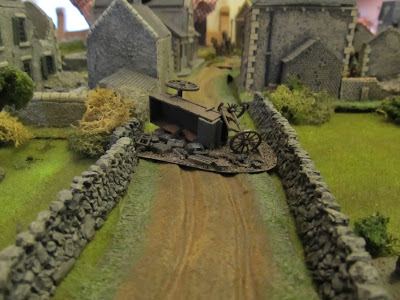 The walled road into the village, mined and with an improvised road block (the cart). 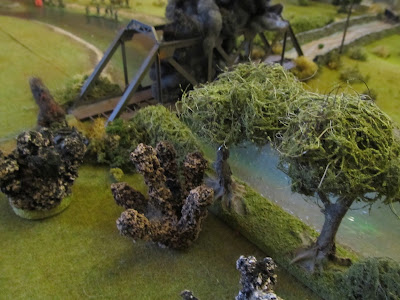 Timed 105 strike, destroying my M45 quad .50c cal before ever getting a shot in. 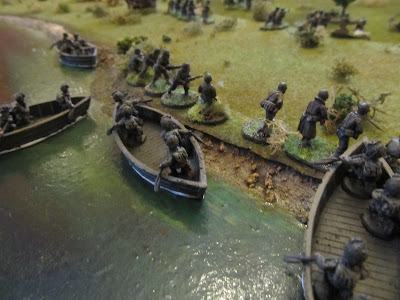 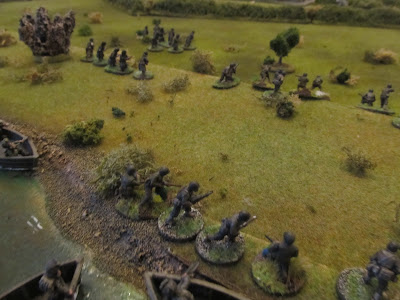 First platoon out their boats and crossing the scrub lands, under mortar fire. PHQ at back, because they got pinned earlier - honest! 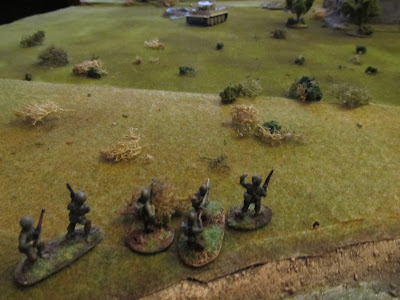 Second platoon find a Tiger talk waiting for them... get those bazookas up front! 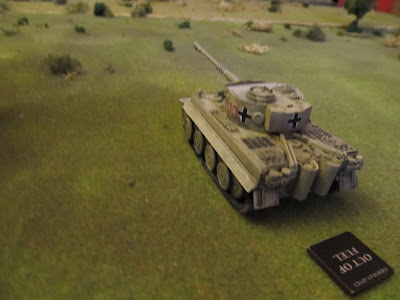 Then, the Beast finds it fuel tanks empty... would have been nice if the crew had abandoned it, but no such luck, they fought on. 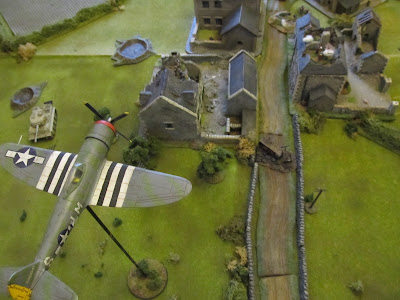 USAAF air strike, trying to hit the farm and missing by a lot. 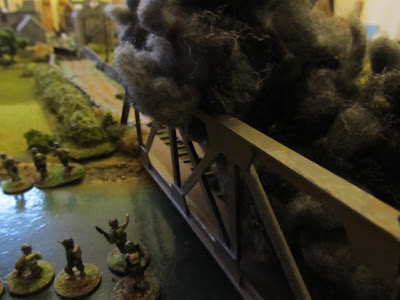 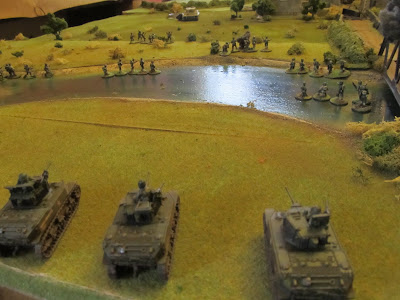 My Stuarts arrive and take on the distant Tiger with HE. It worked well, for several turns, then it didn't, and the return fire was, well, predictable. Second  platoon are still trying to get out of the river. 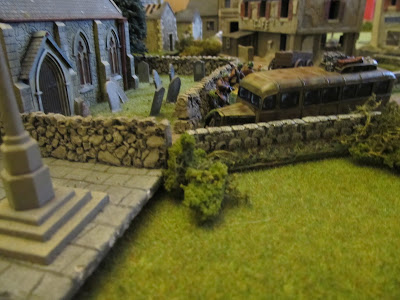 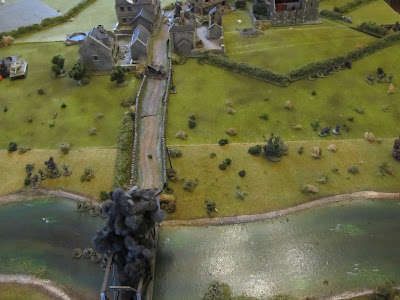 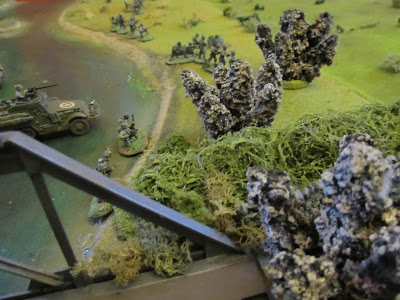 Second timed 105 strike at the bridge, as the M3 tries to get across the river. The Tiger then wiped it out... the results of the M5s failing to pin the Beast again.

Then the camera ran out of batteries and I didn't have any spares closeby. I'd rather be playing that searching for batteries, so that was it for pics for today.