A little more Easter break tabletop fun. This time, a sci-fi Mech battle against my eldest lad, as giant fighting robots seems to be a big favourite (with most of us to be honest).

The rules are my own home-brew, developed to use a standard playing card deck and D6, to be easily understandable by a 10 year old and provide a fast and furious game that is within a short attention span (his,not mine). It pits between 3 and maybe 9-10 Mechs a-side of three classes, Scout (light), Battle (medium) and Heavy Battle (big).

In this game we both had 14 points worth of Mechs, each matching the other with 1 Scout Mech, 3 Battle Mechs and a Heavy Battle Mech a-side.

The rules are stil being tweaked with, but the basics work well, playing cards from your hand to either Move (any number card, with the number being the distance covered plus a modifier for the size of Mech, Scout Mechs getting +4”, Heavy Battle getting +0”). Black number cards are played to fire weapons, red number cards are played for defence (armour and energy shields). Red picture cards are for special movement, like sprinting (maximum speed movement) and firing jump jets (if the Mech has them). Black picture cards are for damage control and repairs to critical damage or putting out fires (which turned out to be important).

Here are a few photos of the game in progress, in what will (might) become our on-going campaign for possession of the ore rich desert planet of Zentauri Prime, House Artor verses House Varrick (that’s me). 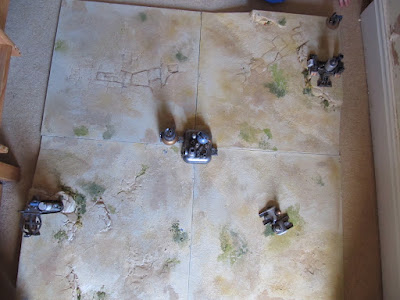 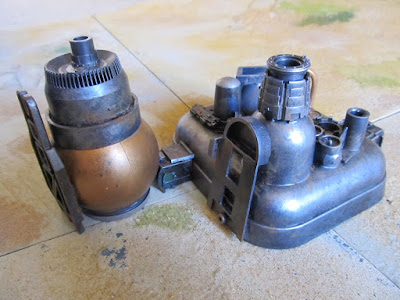 The 4’x4’ table was set up with 3 objectives, each marked by an industrial building (one in the centre of the table, one in each deployment zone). Capturing them and destroying enemy Mechs earns victory points, with the number of points required to win equal to the points value of the game. So, here, it was 14 victory points as the total required.

The battle started with a long range exchange of fire from the two Heavy Battle Mech’s, mine using its huge twin laser cannons, the enemy responding with missile salvos and rail gun shots, until both Mechs looked very badly damaged, but just still standing, and getting low on ammo. After that first furious playing of cards, I sent my Scout Mech sprinting towards the centre objective to grab it first, only for it to be hit by powerful rail gun fire that caused a catastrophic penetrating hit - leaving it wrecked. First blood to House Artor, who then sent his Scout Mech to do the same, and it got there, meaning he had 1 kill and 2 objectives already. I was well behind on VPs.

This couldn’t stand so I used a special movement card to fire the jump jets and send my specialist close combat Mech to assault the Scout Mech. It landed and its grabber claws scored repeated hits, but the Scout Mech was just alive - how! (good defence cards).

Determined to capture the centre objective I pushed my other Battle Mech forwards as well, and it traded fire to no real effect, whilst my third supporting Battle Mech used it bombardment cannons (artillery guns) for some accurate IDF and scored several heavy hits on the distant enemy. By now, most of the Mechs had taken some damage. The enemy came forwards to support his lone Scout Mech, but too late, a fresh close combat card saw my grabber claws tear the Scout Mech down and claim the objective, but not for long, as a flamethrower engulfed my Mech in fire and left it a burning torch. Fortunately, I had a damage repair card to extinguish the fires straight away, but to save the Mech from more fiery death, it fired its jump jets again (last time, it had 2 uses) and sprang across the table into the enemies deployment zone and another close combat. A suicidal charge, but onyl becasue this Mmech was already on its last legs. It did some heavy damage before another flamethrower hit turned it into a smoking ruin once and for all.

Meanwhile, in the centre, my second Batte Mech had been hit in the leg by laser fire and could only limb towards the objective, until a distruptor cannon hit (think Jawa gun from Star Wars), fused its electronics and set it on fire too. Again I was lucky to have a damage repair card in hand to put the fire out before it did too much extra damage. The enemy had also re-seized the centre objective again, and was well ahead on victory points, 12 vs 5.

In response I recharged my Heavy Mech’s mega-laser and scored a penetrating hit on the distant enemy heavy, which saw it collapse to the ground, I had won that duel and it was my second kill. But, to get a LoS for this shot I’d had to move forwards, off the objective in my deployment zone the Heavy Mech was holding. It was a fatal mistake. The enemy in the center had a jump jet leap left, and fired it to fly over its head onto that free objective and claim it too. He had all three, and the extra victory points gained won him the game - 14 victory points to 9.

Drat. I made a big tactical mistake moving (libeve and learn)… but 2 hours of furiously slugging it out had been good fun, which is all that really matters. Lost to a 10 year old… must be a rubbish game! 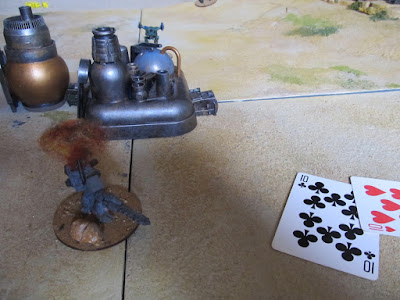 My Scout Mech is wrecked, '10' firing card overwhelming my '10' defence card, in some poor dice rolling by me. 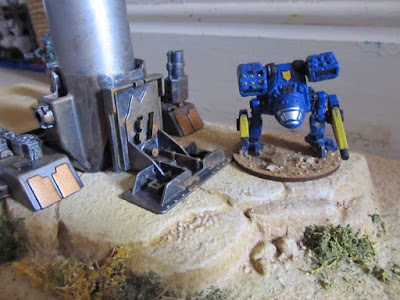 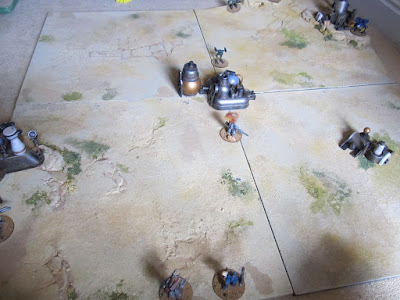 The enemy Scout Mech makes it run to the objective, faring better than mine. 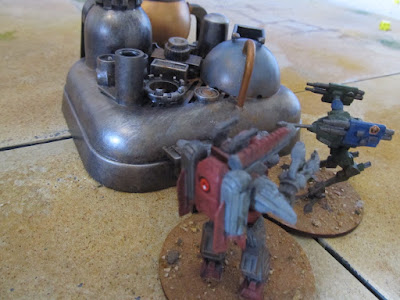 Then is literally jumped, grabber claws inflicting the damage. 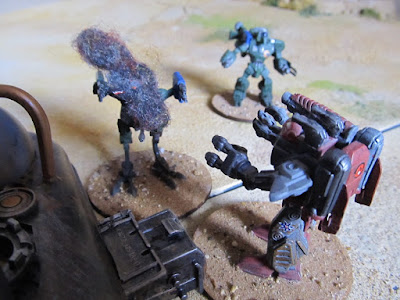 Boom, support jumps in just too late to save the scout. 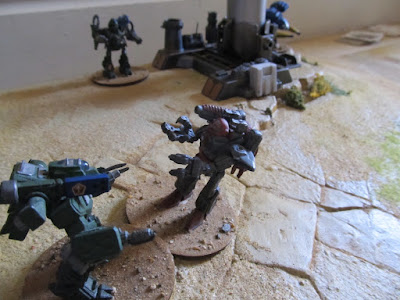 Second target for the close combat and jump-jet combo... not so good this time, but it was suicidal attack by a badly damaged Mech. 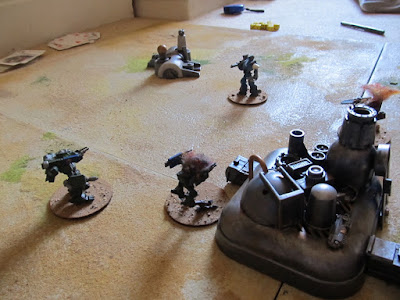 Still blazing away for the centre objective. 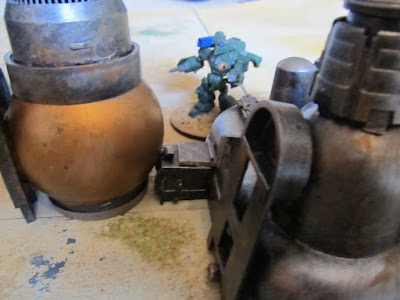 Now back in enemy hands. 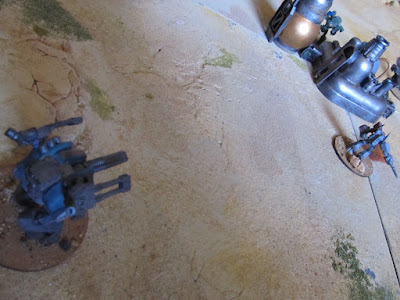 My heavy mech moves forward to get a LoS on the enemy lurking behind the objective. 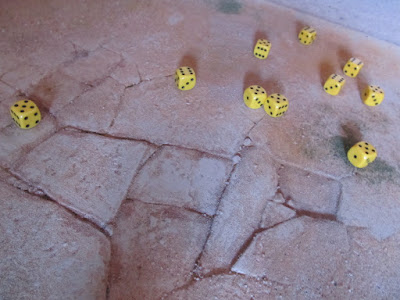 Last jump jet 'bounce' sees the enemy suddenly on all three objectives and winning on VPs. Oops... forgot he could do that.
Posted by Warwick at 05:55