Advance to the Schefflenzstrom Bridges

This was a 600 point (platoon-level) pick-up game for an Easter break afternoon. We both picked our ‘Fall of the Reich’ forces and then rolled up a random scenario, and got ‘End of the Rat Race’, with the Germans defending, holding two bridges over the Schefflenzstrom and my US battlegroup attacking to seize the road and railway bridges as they advanced ever deeper into Bavaria. The German roadblock had obviously picked fairly open ground for their anti-tank guns to dominate.

The Germans 600 points consisted of, approximately, a Volksgrenadier platoon with Pak38, a StuG platoon (including an erstaz StuG with 75mmL70 gun - but very characterful for the late war period). They also had support from off-table 120mm mortars, with a spotter team, a recce foot patrol, a panzerjager unit on bicycles with lots of Panzerfausts, a dismounted panzer crew squad, a forward HQ in staff car, a horse-drawn supply wagon, a Flakpanzer 38(t) and a repair truck.

My US’ approaching mechanised column was; a full armoured infantry platoon, 3 M26 Pershings (my first chance to use all 3 models myself - other people have commanded them, but not me). A battery of 3 M7 Priest and FAO team in jeep. An M16 ‘meatchopper’, Forward HQ (in jeep) and resupply truck (mostly for the Priests). I also had a cheeky timed airstrike but it did nothing (but 10 points for a morale counter seems a good bet) and the Germans were a 'dispirited enemy'.

The Germans deployed their initial 7 units, with infantry in the woodline to my left, the PaK38 in cover behind the roadblock on the road bridge itself, a StuG G hidden in the crop field and the long-barrelled ersatz StuG at the very back but with very long fields of fire across the stream.

My initial column was just 3 vehicles, led by an M26, a halftrack full of infantry and my FHQ (useful for the reinforcements re-roll). I wanted to be attacking quickly, using my speed and mobility before the German reserves arrived in too much strength. 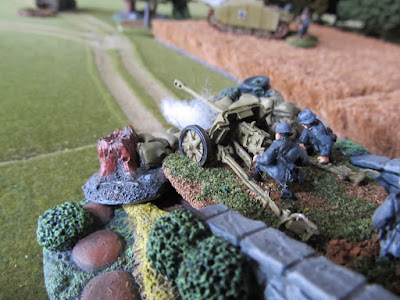 The Pak38 behind the roadblock on the bridge. Puff of smoke means on ambush fire. 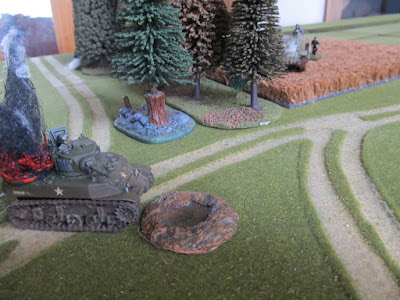 Wrecked recce vehicle that sparks the encounter... a M5 having just run into the waiting PaK 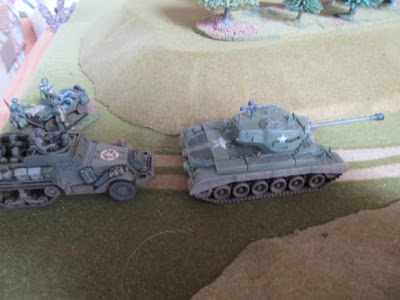 My initial column on the table edge. FHQ watching on and calling up the reserves asap. 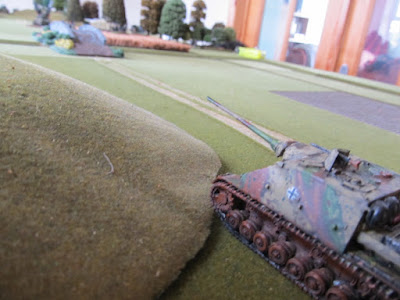 The ersatz StuG, sites on the lead Pershing from afar. Their duel was a minor win for the Pershing, both scored hits and glanced, but it was immobilised. 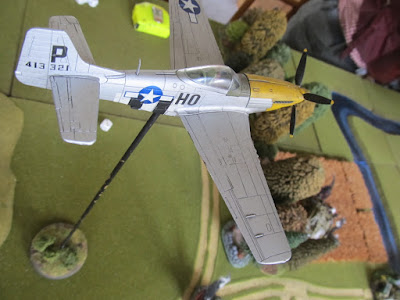 Early air strike, with bombs that did nothing...

The game was on, and I decided to divert off the well-covered road to the bridge and swung right, using the hill, woods and crop fields as blocking cover. The lead Pershing began trading shots with the distant ersatz StuG, and missed (it was on ambush fire and fired first, but also missed). I deployed both .30cal MMGs team into the woods, hidden, with the plan of using them to pin the Volksgrenadier in the wood line. That didn’t work, the first incoming120mm stonk smashed the wood, wiped out an MG team and destroyed their half track too - painful.

My reinforcements continued to roll up the road (or just off it), and I sent the M16 to do the MMGs team job. Its quad HMGs were soon suppressing the entire woodline and trying to do deforestation with .50cal bullets. In the hail of bullets 1 of the German OP team’s men was hit, and the then the unit was pinned. The OP team was gone - a lucky break from the 120mm mortars for a turn or two.

The Pershing and ersatz StuG both scored hits and glanced off the other armour… it would be a protracted gun-battle at 68” range!

My other Pershings, heading right, now lined up the forward StuG and, spotting it, opened fire. All misses, but the StuG got a rude surprise at how tough the M26’s front armour was and bounced off… oh the joy of not brewing up with every German AP hit! 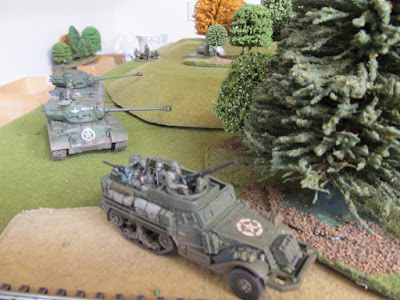 My main attack moves right, well out of the line of fire. 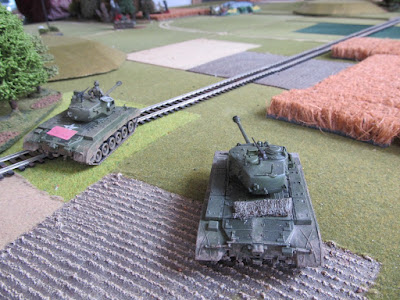 Pershing by the railway line start to duel with the StuG in far crop field. A lot of ammo used for not much result. 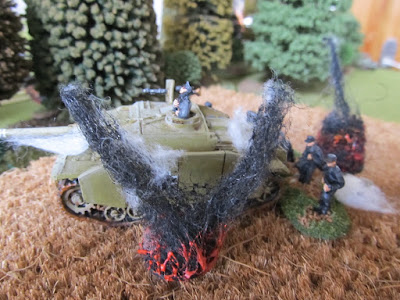 StuG and supporting infantry both now pinned by incoming fire. 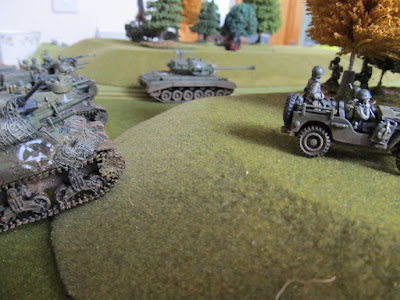 Priest firing line on my table edge and the OP heading forwards in his jeep.

My Priests all arrived and formed their firing line whilst the OP team scrambled off up the hill and into the woods to look out over the bridges and along the open road. Soon my guns would be thundering in 105mm shells and causing havoc with pinning. One volley deviated and hit the newly arrived German FHQ, wiping them out. 2 chits for them, and 1 for their staff car too… the Germans winced under the US artillery’s power. Meanwhile, their own 120mm mortars were strugglign to be effective, and now the recce foot patrol was having to do the spotting. Still, that’s one advantages of mortars over bigger guns, there are plenty of spotters about.

The tanks and StuGs continued to duel, but to no efective, except that the ersatz StuG was immobilised by a 90mm AP shell that tore its track off. The supply wagon arrived behind it to rearm the Germans’ best gun, and then the repair truck to try and fix the track.

My half tracks, following behind the Pershings also swung right, but the ambush fire from the (silent until now) Pak38 scored a very lucky hit at maximum range and knocked out on half track. Then, next turn, they scored another hit (needing 6s) and knocked out another half track… crack gunnery, until a 90mm HE shell from a Pershings landed, wrecked the gun and the crew ran for their lives (not so keen on taking what they had been dishing out). The counter drawn for that loss was an air attack, and the Luftwaffe arrived (what!). In an Me-262. The jet fighter raced in and strafed my Priests (now rearming) with 37mm cannon fire, but missed. My M16 swung into action and repeatedly blazed into the sky, but also missed (every turn, jet fighters are very hard to stop). 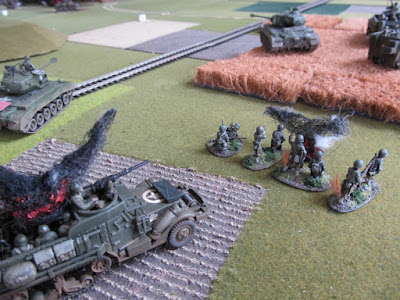 An M3 catches a 50mm shell from the bridge, one helluva shot. Infantry de-bussed and pinned. 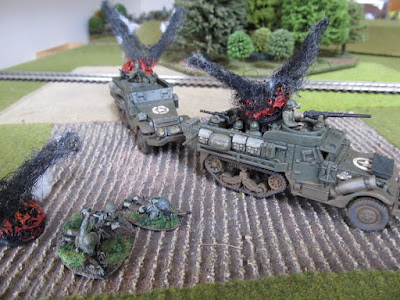 and, outrageously, again, another hit at maximum range see another M3 smoked by the irritating PaK38. 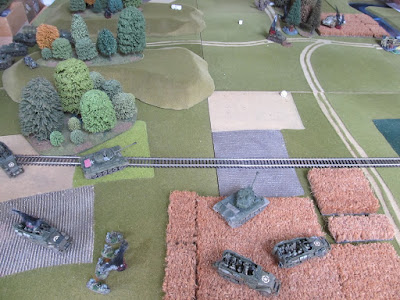 My attack on the right building, awaiting the moment to charge the road bridge. 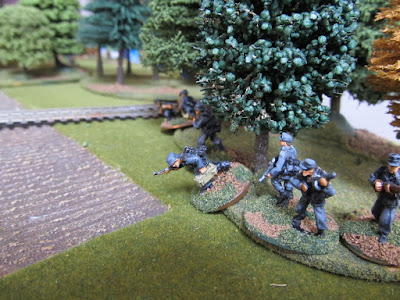 Recce infantry patrol, now stand-in mortars spotters, lurking on the far table edge by the railway line. They didn't have great LoS, but needs must. 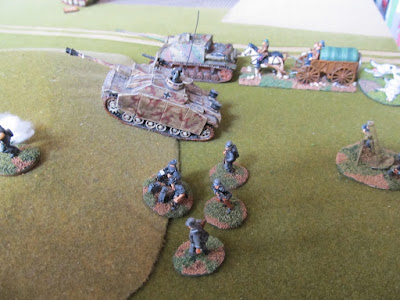 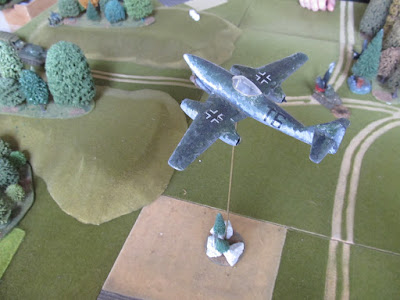 A rare showing from the Luftwaffe... the roar of jet engines is heard. Unreal... where was the USAAF? 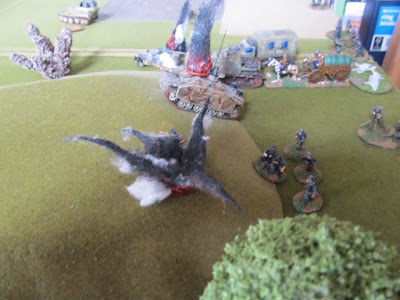 The Priests get busy doing what they do... making a mess of the enemy reinforcements.

The German’s third StuG arrived and took up a hull down position on the distant hill. It took over the mortar spotting duties, only to be spotted by my Pershing on the road and it scored 2 hits (double 6!). The StuG brewed up, the tables had turned in the armoured battle. The forward StuG was now out of ammo and reversing away through the crop field and back across the stream. The bridge was all but undefended when a new Volksgrenadier squad ordered forwards to hold it came under tank MG fire, broke and ran. I could press on now, even with the Me-262 circling overhead, its strafing was wild and ineffective and then it was out of ammo and headed back to base. Phew! 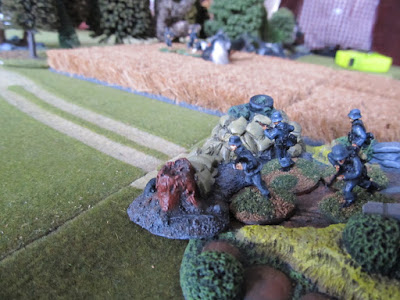 Last of the Volksgrenadier infantry on the bridge, before tank MG fire broke them too. 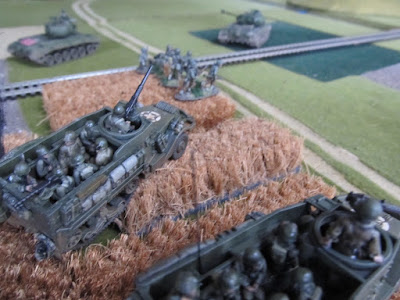 The M26s roll on, armoured infantry await behind, but the Germans pulled out before the halftracks were needed for the close assault.

My Pershing tanks, all three now moving cautiously towards the road bridge, MGs blazing because their ammo bins were empty, looked unstoppable. The German repair truck failed to fix the StuG’s tracks, and when more US artillery hit that hill, causing more pinning and wiping out another unlucky MG team the Germans had taken enough and bugged out.

Victory for the US, the bridges would soon have armoured infantry (in their last surviving M3s) to secure them. The road westwards was open.

In the end, the German’s BR of 34 broke, with the US reaching (also) 34 but out of a total of 44. A solid(ish) win and revenge for last time’s hefty defeat. The Pershings had been a rude surprise for the Germans, well beyond the capability of the StuGs (except the ersatz one) to deal with. Nice to have the boot on the other foot for once. My Priest artillery was excellent, the 3 M7s kicked out hellish fire each turn once the OP and FHQ were in good places to see the entire tabletop.

Tanks, infantry and artillery working together had won the day. With compliments from Detroit - Take that Hitler!!