Another run-through of my on-going Mech Wars. The fourth trial for these home-grown rules, and with a few mods from last time (we, well I, have doubled the number of cards a player can use in his go, to speed things up still further). This worked really well, changed the dynamic as each side was ‘doing’ more. This I liked, for fast and furious action and combo-moves. Two shooting cards with a single Mech (different weapons systems though) really brings the hurt! As I found out.

Anyway, my House Varrick Mechs were attempting to seize another mining facilty in the deep deserts of Zentauri Prime, held by the enemy House Artor. As ever, the big guns of the heavy Mechs were the first to engage, but with little positive results for me, and we both unleashed our long range ‘bombardment’ weapons (artillery) across the table. As his missiles streaked and my artillery cannons boomed into the sky, both our scout mech made for the objective, but again, like last time, mine was hit by an accurate fusillade of heavy railgun fire and reduced to scrap… twice a set of good rolls have cost me my scout at first shot - lesson now learned. One of my heavies also lumbered forwards (they aren’t quick) and traded some shots, whilst the enemy scout scurried off to hide, the little b*****.

Boldly, an enemy medium Mech jump jetted straight across the table to take on my second heavy in close combat, a good move as this heavy had been awesome last game, but lacked any close combat weapons. The damage inflicted was superficial and I lumbered away and turned to bring many weapons to bear, only for the enemy jump jets to fire again and the target to be gone. Wasting turns and cards chasing the fast-fellows wasn’t a great move for my best (but slowest) Mech for raw firepower.

As this little frantic engagement ended, my artillery support Mech was starting to run low on artillery shells, and my other heavy had reached the objective and claimed it. Blazing away with everything he had (plasma cannon, repeating gatling gun), but found itself subjected to a flamethrower shot that set it alight.. flamethrowers don’t do much in the way of actual structural damage, but automatically score a critical of ‘On Fire!’ each time they hit.

I needed a damage repair card (black suit picture cards), and didn’t have one. Damage repairs also allow your Mech's fire extinguishers to work. I ditched cards from my hand to find one, and failed. Curses, because a second ‘On Fire!’ result means a Mech is immolated and destroyed… guess what, the next flamethrower splurge did just that, and my heavy Mech was toast!! Eject! Eject! Don't get too close to flamethrowers without damage control cards to back you up!

I had now lost 2 Mechs to 0, and one of last two was almost out of ammo too… it didn’t look good, so I started to pull back, firing the last artillery rounds as I went. This fire did hit and destroy 1 enemy Mech as it attempted to pursue and with that loss we called it a-day. I would be off the table next turn anyway.

So defeat in another game. I'll call it  tactical withdrawal! We have now decided to turn our Mech War into a basic map-based campaign, and these early results will count. I’ve been working on map for the campaign, complete with mines to capture etc, along with the background and map movement rules. For now, House Artor have the early edge which we’ll reflect in map deployment when we start.

Here are some snaps of the action... 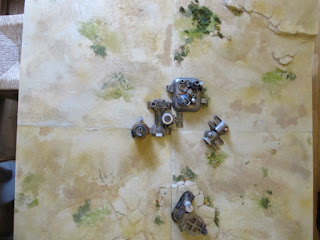 4 x 4 area with refinery in the centre. Enemy at the top, me at the bottom. 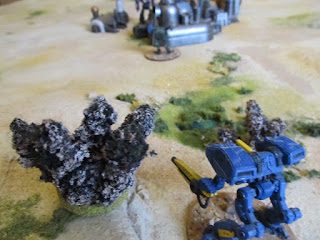 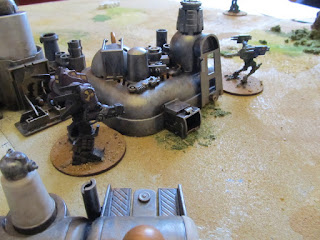 My Heavy moves into the refinery, whistle the enemy scout skulks out of LoS. 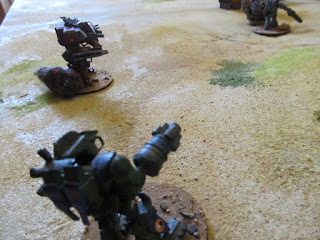 The bold jump-jetted attacker, with my send Heavy damaged in the leg and trying to turn to bring some guns to bear. 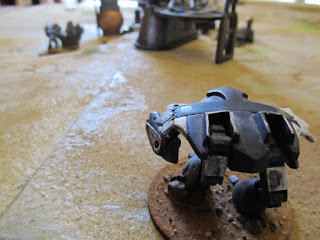 My artillery support Mech at the back, but almost out of ammo. I wanted ammo to be a restriction in the game so all weapons are rated for it. Big guns do a lot of damage but don't carry many shells. Lasers can always be recharged from the powercore, but that means ditching a card. 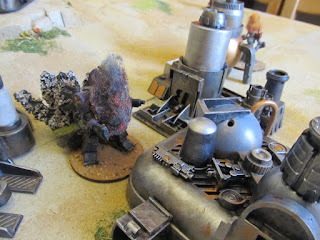 Ouch, my Heavy is immolated in burning napalm. 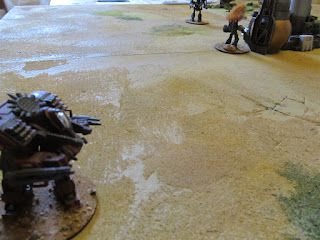 Retreat! ... my Scout Mech burning in the background. 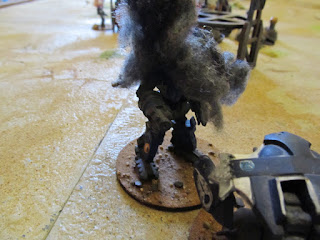 One enemy kill at least, artillery shells blast it it at short range, but it is only a consolation kill... 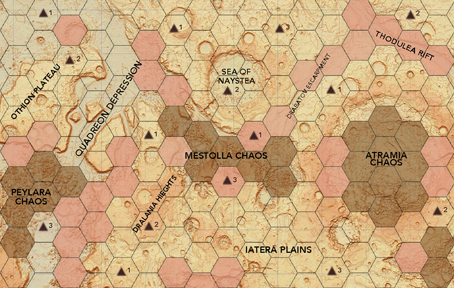 The Zentaurian War campaign map before any deployment. Brown hexes are very difficult ground, pink are difficult. The triangles are the mines and refineries with their 'resource' points once captured.