LAST STAND AT THE KONIGSGARTEN, GAME 7

The final installment of the Konigsberg campaign… it’s game 7, and the last Germans in the city are dug-in in hedgehog defence around the Konigsgarten, under which (actually the Opera House I believe) was General Lasch's command bunker. It would be a mini pre-run of Berlin and the Reichstadt.

The scenario was Das Hexenkessel, with the Germans almost surrounded. They were well dug-in, in trenches with barbed wire across the gardens, with 2 fortified buildings (the Opera House and the University building - both also objectives). These also had cellars, very good against IDF. There was only a single StuG III still rolling, and an 88 plus loader team dug-in too. The infantry were mostly Volksgrenadier with some auxiliary Volkssturm as well. Their rather feeble morale was backed by all three special rules to boost it, ‘To the Last Bullet’, ‘Backs to Berlin’ and a Field Gendarme team. They all gave the Germans +11 BR!! They were determined to fight to the very end.

Here was my strike force, something a bit different, very good assault pioneers infantry and my JS-II platoon, heavy tanks (there first ever roll out as a full platoon). I would use my on-table 122s for direct fire to bring down buildings. The infantry platoon's job was to pair-up with the pioneer squads, they would lead (ie take the hits and pins) and the pioneers would follow-up, use Reserve moves to get close and then unleash flame-thrower naughtiness! No off-table artillery, points did not allow anything but medium mortars, way too feeble in a city fighting and this was an experiment… to go in hard with the infantry supported by big-ol' 122mm HE from the howitzers and tanks. Mostly though, it's models that needed tabletop time.


Time to finish this…

After deployment the game started badly, for me… first ambush fire killed 1 artillery man on the 122 gun facing the Opera house, (with the mission of making sure Wagner was never heard here again). The rest of the gunners ran! Cowards. Plan down the pan in about 5 seconds.

Then the other gun made up for it. 2 hits on the university building and then 3 sixes for structural damage brought it down! Boom!! 4 German squads were wiped out in the collapse, MG team, stretcher party, HJ AT team (all those Panzerfausts). Ouch! After just 2 orders, we both already had 4 counters each… this wasn’t going to last long.

In the end the game lasted about 3 hours. Hard fighting at close quarters, my flamethrowers did the business and wiped out 2 German rifle squads (the Volkssturm didn’t sign-up for that treatment). The JS-II arrived to support and I went for surrounding the enemy, rather than one strong attack, making the most of the scenario’s deployment rules. I lost one JS-II to a Panzerfaust strike, but the others all did good work. The first hit and destroyed the 88 after its frontal armour had survived the incoming ambush fire. Two others hammered a trench line and wiped out the men inside with 122 hits… the last man was pinned and fled. The final JS-II got into a prolonged duel with the StuG, which bounced 4 shell impacts off its frontal armour… get in… so nice to survive German AP shots for once. It’s return fire missed and it ran out of ammo, including using HE shells at the StuG. But when the re-supply truck arrived, it re-armed and the next shot vapourised the last AFV in Konigsberg… German counters were building fast…

My Sturmovik timed strike arrived, buzzed the gardens, but was driven off by small arms fire on ambush, drat! The pilot flew off to find an easier target. My infantry, on the roof tops, shot-up his supply wagon, killing all the horses and one squad moved up to grab the big pile of rubble which had been the university objective, and then my ZSU-37, in a very rare outing, finished the game, its 37mm cannon wiping out a Volkssturm machine gun team in a blaze of fire. The last Germans had had enough. The white flag was flying over the Opera House. General Lasch emerged from the cellar to find JS-IIs parked on his lawn, literally.

It had been short and brutal, merciless from the Red Army, but like two boxers slugging eachother in the face. Even so, my BR counter total (amazingly, I can find 4s with monotonous regularly) had reached 37 from 40, so it was close. The Germans had broken at 41 (with their +11).

It has been a top campaign, the 3 VPs for the Russian win makes the campaign victory points stand at Germans 8, Russians 7… close, but the German’s squeaked it… winning 4 from 7, with 3 Russian wins. We have glutted ourselves on FotR goodness, I really love the feel of these games over 1944. 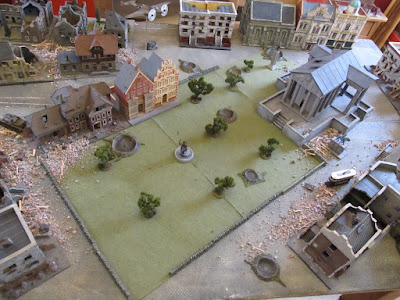 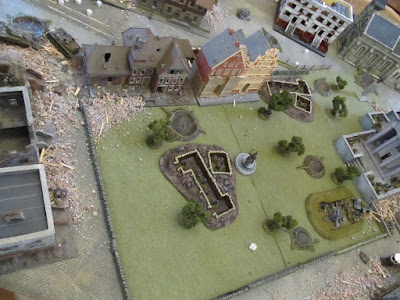 Germans deploying, making a mess by digging up the park. 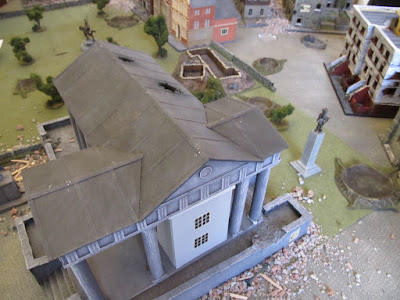 The objective, command bunker/Opera House... bit wierd, but that's how it was. 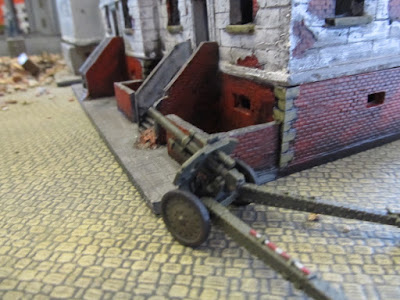 122 howitzer abandoned after first ambush fire shot of the game. 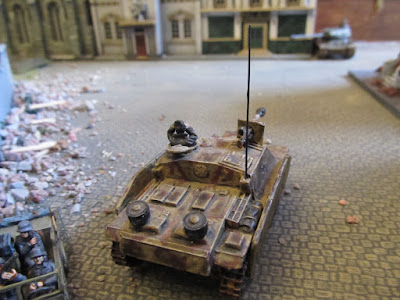 StuG vs JS-II, the mismatch. 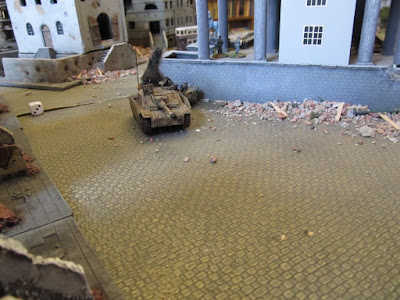 JS-II wins... but it made hard work of that, mainly due to lack of ammo. 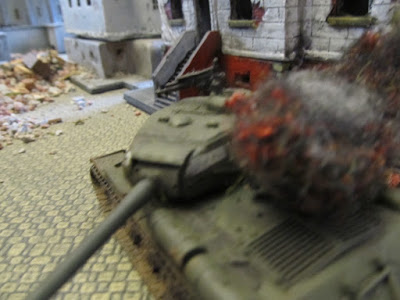 Not this one, roof top Panzerfaust... err, watch out for them. 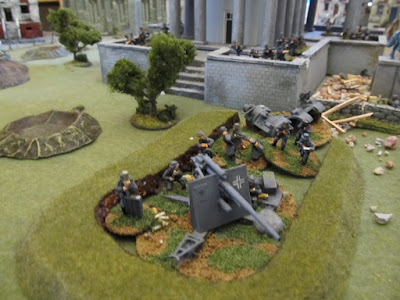 88 in the park. Dug-in with loader team, a tough nut. Unless it rolls a 1 for morale and auxiliary gunners all do-one! 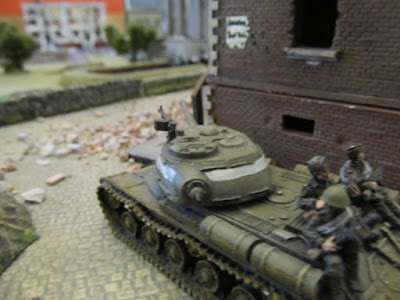 The JS-II claiming that kill, having worn an 88 shell of the front armour... nice! 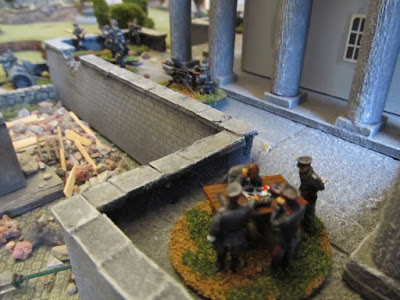 German Senior Officer, co-ordinating the last stand from the Opera House, they're not playing Verdi tonight! 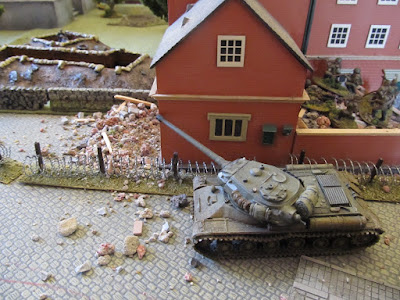 JS-II clearing the trench line (there's nobody left in it).
Infantry have the building, a second objective. 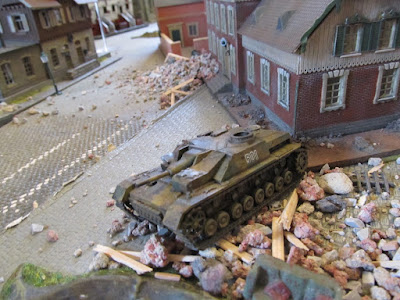 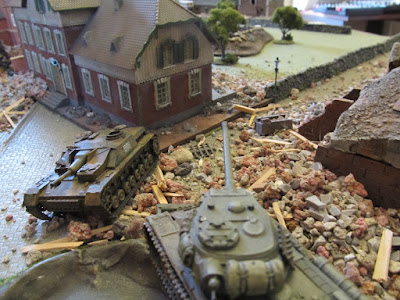 Bringing the gardens under HE fire... 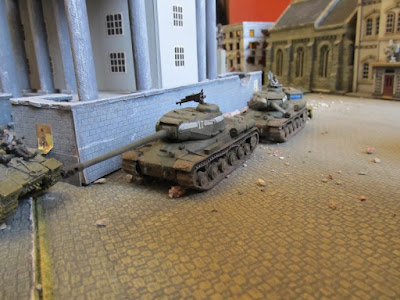 Endkampf... Herr General Lasch, the Red Army is parked outside, they'd like a word!

Time for a change of scene now. Maybe away from WWII for a few games… I hear the bugles call for some Longstreet ACW action… or maybe my Romans are due a few battles in Solders of Rome (coming one-day).