Battlegroup South has been and gone for 2018, another top weekend down in Dorset at the Tank Museum (once you have fought the traffic). This year we played the campaign weekend using the Torch book, 1942 lists for some desert-action. Three games over Sat and Sunday, each 500 points. Time to get out my DAK and get some sand in my boots.

I pre-planned three lists for the three scenarios chosen for each round of games. The first was Defence Line, with the Axis dug-in - the initial Allied attack. The second would be the Axis response with an attack/counter-attack scenario. The final game, on Sunday morning, would be the Axis in retreat, defending in a Delaying Action. A neat little narrative of games, the work of our campaign organiser, Andy Tutton.

Game 1 was against Mark van der Born’s Brits, who made good use of an SAS jeep team and LRDG team to start behind my dug-in defences and, starting turn 1, jump me, assaulting my HMG dig-out in a blaze SMG fire and grenades. It was a close game, his 25 pdr timed strikes hammering my trench lines (my counter-battery fire stopped one). The RAF also turned up on turn 1, bombing my positions and costing me an anti-tank gun… a horrible start. I did recover somewhat, trying to fire-fight the SAS teams behind me… and my artillery started to cause his approaching Shermans some pinning issues. My MGs managed to hit and damage the circling Kittyhawk. But, in the end, when his 3” mortar bombs started landing, he squeaked home… using tactical co-ordination to good effect to get his SAS back in the fight with their twin-pintle-mounted MG jeep (that thing kicks out firepower!). A narrow Allied win (by just 2 BR points) and a memorable fight (especially for the SAS/LRDG sneak attack).


Next game was to be against another of our Dutch visitors Rogier. It would be a tank-brawl. He brought Crusaders and Grants, to face my Pz II, IIIs and the single Pz IV F2. This went the distance (14 turns I think), both seemingly unable to hit with AP fire, or unable to penetrate when we did, except my F2, which scored 4 Crusader kills (after a resupply). Still, neither of us were that close to breaking when my 250/3 took off across the table towards the last far objective (I already had 3 thanks to my Kradschutzen squad). It was pursued by a Daimler armoured car, 2 pdr frantically targeting it. It missed and then, luckily for me, ran out of ammo. My 250 took the objective, machine-gunning his single sniper holding it, to win the game on all objectives seized. Another fun battle, with a lot of KO’d armour by the end. I even emptied a Pz II of 20mm ammo… some doing (all long range suppressing fire at enemy tanks). My resupply truck earned his wages too, resupply 4 tanks on my side. The British lack of supply truck started to hurt him by the end.


Final, on Sunday, I’d be facing an old nemesis (and lovely man), Graham Baylis, whom I have played twice at campaign weekend and lost both times. Time for some measure of revenge! Graham has been to all the BG campaign weekends (a stalwart) and learn the rule well over the past years. He knows a few tricks now and likes to reserve move a lot. Ambush fire then!

The Brit's attack started with them driving straight towards my three minefields, before his leading Daimler drove into it. 'Err... that’s a minefield marker’ I explained. Graham hadn’t realised… and suddenly his whole attack plan (advance straight at the big minefield) had to be abandoned (no engineers to clear it). The Brits all reversed away and swung right across the table, to attack into the open ground (covered by my waiting 88 and 25 pdr). At the back, my panzers lurked on ambush fire, as a second line. I was simply playing for time, as the Brits only had 9 turns to break me or lose the game.  The ‘Oh, it’s a minefield!’ mistake cost the Brits at least 3-4 turns. Highlight for me was a an M3 Honey rolling over my buried 500 lb bomb and going into orbit.

The minefield delay cost Graham the game really… he did get going, knocked out both my big guns (both rolled 1 for morale tests and the gunners fled - rubbish!), but my tanks held him up long enough… so by turn 9, I was still fighting and it was an automatic victory to my DAK. Delaying action successful, the others would now get away back to Libya.


It was a top weekend, along with some light retail therapy (fresh stowage and bits and bobs) with the show traders and a few good chats (and many questions about BG NorthAG's progress). Thanks to all those that came to play BG, Andy T for organising, Matt T as best Axis player (3 wins with his Italians) and Nick P as the best of British. Well done the Brits who won the campaign overall, 21-11 in victory points. Now, it is on to Tunisia for them… I look forward to next year, when a BG Blitzkrieg weekend is planned. Might be time to paint some Belgians.

Here are a few shots (not many, I was busy) of the tables, forces, games, etc. 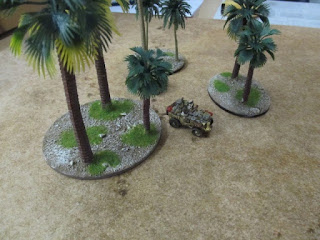 Sneaky SAS jeep team behind me in game 1, stole an objective then unleashed hell for twin-pintle-mounted MGs. 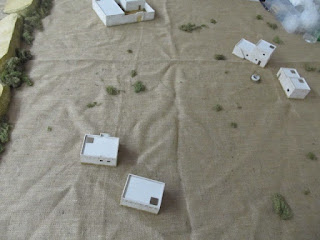 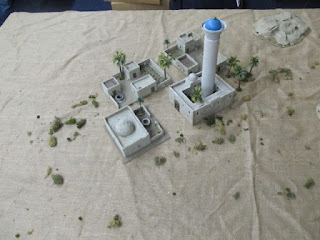 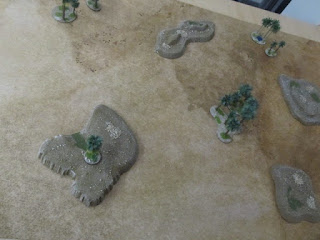 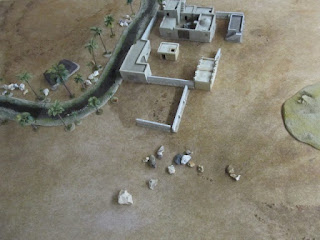 Table 2. Scene of a heroic Italian defence of the compound in their first game. 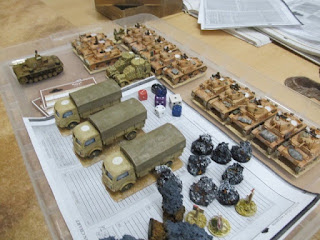 Will's (from PSC), Italian armoured force, narrow defeated in game 2 after a epic come-back (he was in big trouble after the first few turns). 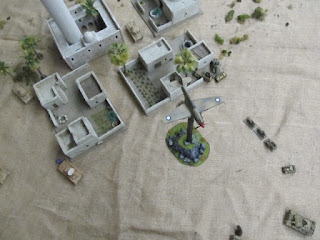 The RAF show up again in my game 2... I was dogged by air power, no sign of the Luftwaffe though. 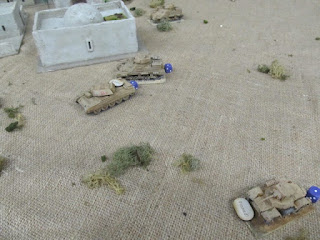 My Pz IIs do sterling work with 20mm cannon pinning... allowing my Pz IIIs to close for killing shots (well, that was the plan). 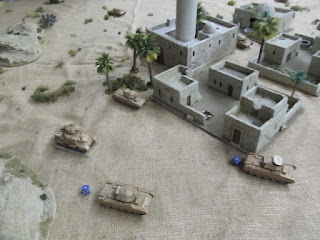 Round the other side of the Mosque, the other British pincer, ran into a F2 'special' which worked them over (despite being immobilised by wear and tear) 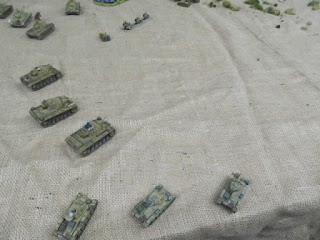 My DAK tanks fight to get out of the corner after some rubbish reserve rolls... no Panzer Marsch in 1942... (who wrote these rules!). 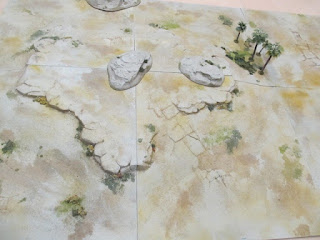 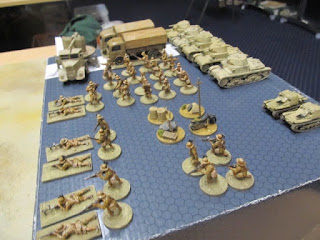 Matt T's winning Italians, the backbone of the Axis efforts...