This was meeting engagement scenario (we randomly rolled Recce Screen, but only after we’d picked forces),  for Battlegroup: Torch, set in 1942, somewhere in the deep deserts of Egypt. It would be an Ariete armoured battlegroup vs a British armoured battlegroup, 750 points aside.

I had planned to go with an infantry force, using both my infantry platoons (one has not yet seen action), but realised that the 'Mobile Warfare' rule meant I’d need trucks for them all, and I don’t have the models (hoisted on own rules petard), so I reverted to an armoured list. I’d go with smallish force, but well-supported by off-table guns and additional fire support. That would eat into my BR total, but make C and C easier, with only 3 officers in this sized force, it would be tight anyway.

The heart of the force was a motor rifle platoon and its supporting Vickers and AT rifle team, with the 3 M3 Grants. The gunnery support was the FOO in his carrier, along with off-table 3” mortars (lots of spotters for them) and 4.5” guns, with a PRTP, 2 counter battle fire missions and a 2nd priority request (aided by dispatch rider) for a big-gun stonk when I had a suitable target. A Kittyhawk timed air strike would help too, for the free counter inflicted. I also had a towed 25 pdr and loader tma as a stand-in ST gun (no 6 pdr model). Hopefully, I’d be able to pound the Italians with all that firepower, keep him well pinned and use my Grants to bully his little tanks.

For recce I had three scouts: a sniper and 2 Humber IIs (first outing for these models, so obviously doomed). Other stuff included the CO in his staff car, a signals Dorchester to keep those guns firing, a supply truck, a repair truck and a Bofors for AA cover. That was about it… small 'all-rounder' of a force with a bit of everything.

The initial recce screen turns (just 2) were uneventful, as both sides got into position and/or on ambush fire and my sniper pinned his HMG team up the Jebel’s rocks with some accurate suppressing fire to keep their heads down. My Humbers split up, one holding an objective on the my left on the end of the ‘little jebel’. The other had the ‘big jebel’ under observation for signs of Italian movement and called in a few harassing mortar stonks.

The reinforcements began to roll in (well trickle), as we both rolled low for these - stretching out the game. 1, 2 or maybe, if lucky, 3 units a turn was the norm… this made for a odd battle, with neither side being able to mass much combat power in one place. With the two jebels blocking lines of sight, it became rather cagey,and there were basically two Mexican stand-offs around the hills, me one side, the Italians the other, with both waiting for the units and orders to get an attack moving (mostly in vain). I rolled terrible for orders (2, 4, 4, 5, good grief!), meaning to get units in the battle I had to sacrifice my artillery (all those points doing very little).

The turns passed quickly, the Italian attack building slowly on my left, at the ‘little jebel’, now reinforced with one M3 Grant, and the first infantry to de-buss from their trucks (which then withdrew). The Auto-Sahariana called in artillery fire, got a wild result and shelled themselves (the first of about 6 or 7 wild artillery shots in the game - the Italians shelling their own units due to ‘Rounds on the Way’, 3 times! - mostly pinning themselves).

As the two side skirmished, my other 2 M3 tanks drove up the central valley for the objective in the centre of the table. I figured they’d be able to take most Italian AP shells frontally (and kept the rocks between them and that 90mm AA - which they could not hope to survive). It sort of worked, 1 M3 was pinned then abandoned after multiple 47mm AP hits… tsk! But the REME truck rolled up and a few turns later they were rolling again (I foxed a dead tank, first time in years!).

My 4.5” guns finally got going on the PRTP, but the nearby rocks proved amazing cover for his anti-tank gun… and I was mostly just making dust (on which, we rolled 12 for desert cloud so it didn’t figure until the very end).

The Italians were manoeuvring beyond the Jebel Mayouf, bring up their three Semoventas and more Bersaglieri in trucks. I was waiting on the far side on Ambush fire, with my portee’d 2 pdr, deployed 25 pdr in AT role, Bofors gun, sniper, a rifle section and a Humber. The 25 pdr and loader team was waiting to blast his armour (I had taken it as a stand-in AT gun, as I don’t have a 6 pdr model - one to add I think). The stand-off continued. A timed Stuka strike did try to bomb me, but the Bofors was ready and drove it off - hurrah! My own Kittyhawk swooped in but its bombs didn’t hit much except sand. Enemy took a chit though.

At the ‘little jebel’ I had seen off the first Italian probe, motorcycle troops had routed after a 3” mortar hit, and the M3 Grant had KO’d a distant M41, but more troops were massing, more infantry, a little 47mm Semoventa was being pain, pinning my Grant with AP fire and refusing to die when my AT rifle team hit it twice. I lost my rifle section to incoming 105s (finally vaguely on-target), which my counter-battery mission failed to stop. My second Humber had been immobilised by a breakdown counter, but at least it was on the objective.

The battle had sort of reached stalemate, nether side willing to push forwards much… exchanging artillery  and mortar fire and waiting. The dust thickened, so with ranges now cut and it harder to see, we figured it was time to get on with it. I pushed my M3 Grants onto the centre objective. My 4.5” guns finally destroyed his 47mm AT in the rocks (that took some pounding) and the last objective on the table was suddenly free. My two Grants could get there in a turn’s movement and win the game for me - too tempting.

I went for it, but was instantly thwarted. The first Grant was pinned by ambush flanking 20mm Breda fire from the lurking Autoblinda armoured car, the second was hit in the side by the 47mm Semoventa and KO’d (for the second time). At the same time, a pulled Low Ammo chit was played on my 25 pdr and a 6 rolled. The gun, loader team and quad all withdrew! Argh! It was a turning point… suddenly the cagey Semoventas moved up onto Jebel Mayouf and opened fire, lacking any real AP power my line was now vulnerable. The portee’d 2 pdr truck was hit by HE shells and destroyed… my infantry were pinned and the blazing 15mm Besa on the Humber was little help. My right flank was collapsing.

In the centre it didn’t go much better. My pinned Grant was targeted by the 90mm AA (it had moved to get a LoS) and its aimed fire rolled a 6 to hit - boom - no more M3! The end was close (I was now 1 BR away from breaking). I clung on and, expected the end to come on my next chit, but drew an Air Attack. In came the RAF, another Kittyhawk, which then bombed wild again! and hit my own rifle section, just pinning them - phew! Who is that idiot pilot? The RAF wasn’t enough to save me though, and when M41 tank MG fire spotted and wiped out my AT rifle team on the ‘little Jebel’ that is enough… another BR counter and my forces broke. The Italians had captured the high ground at Jebel Mayouf.

Another defeat (I’m on a bad run of 5 in a row atm - ho-hum!). It was a strange game, many weird things happened with the dice… the repeated wildly inaccurate shelling, a Mine Strike that failed to kill something (unheard of), neither side able to roll 3 or more for reserves (even with the senior officers re-roll), my Grant’s 37mm guns failing to penetrate (repeatedly) and my 25 pdr just upping and doing-one on a random draw (very gawling). I think that moment changed the game… until then it was close, with me marginally ahead on counters drawn. In my defence, I had inflicted more BR loss than I had taken, but the Italians had a higher total (less off-table artillery). All excellent fun though…

Here are some pics of the game, to prove it all happened ;-) 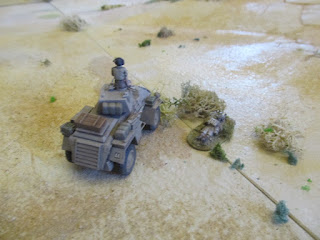 Recce screen, Humber and sniper looking up at the Jebel Mayouf. 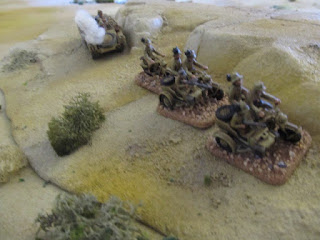 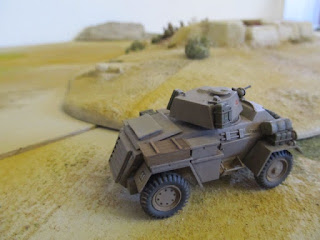 Waiting for them, the other Humber... 15mm BESA primed... 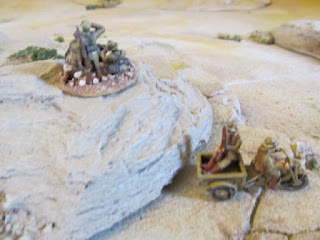 Recce HMG team and trike, up on the Jebel. 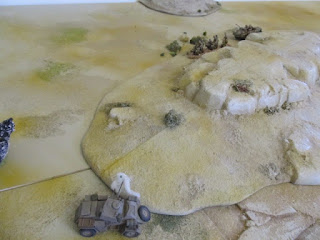 Start of the Mexican stand-off on the little jebel 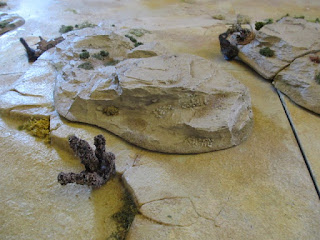 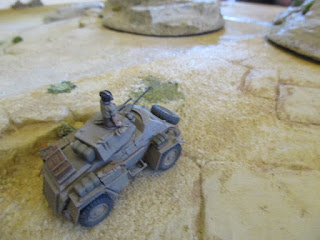 Humber probes up the jebel, hunting those machine gunners 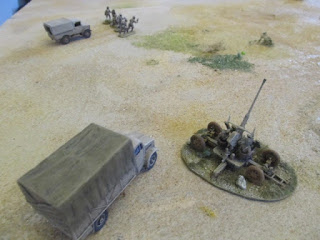 Bofors unhitched and in place, as first reserves arrive 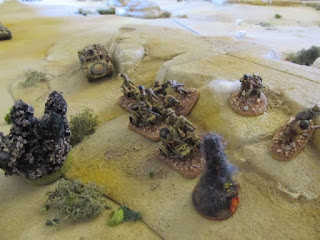 Italian 105s fall on their own recce troops 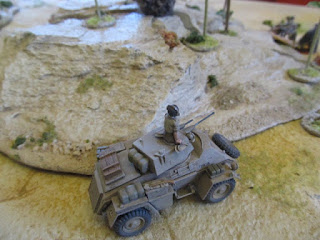 On top of Mayouf, the Humber gets a better view of Italian deployment 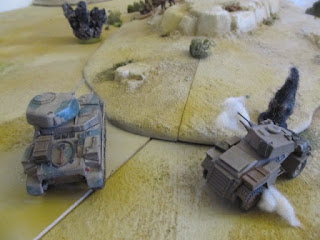 A bit of help for the immobilised, pinned and an ambush fire, Humber 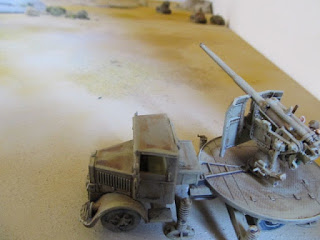 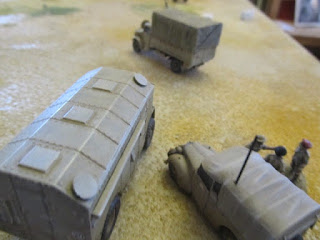 HQ at the back, directing  the action. Dorchester proved useful. 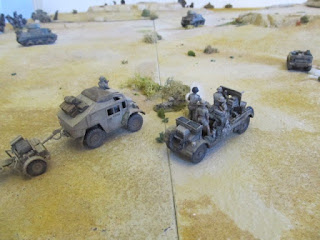 More reserves on my right... to form a reserve slope defence against the jebel. 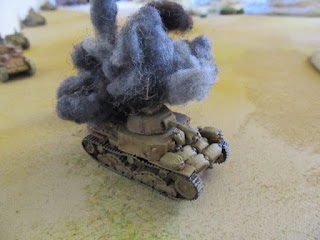 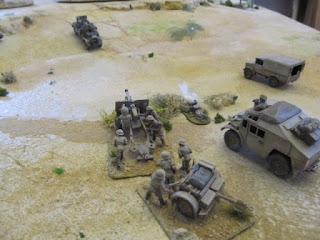 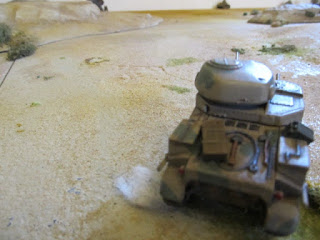 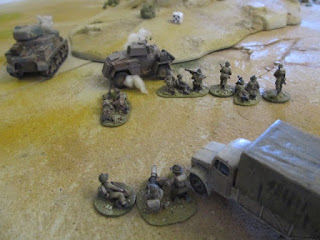 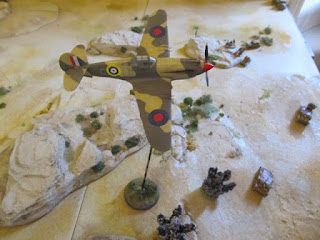 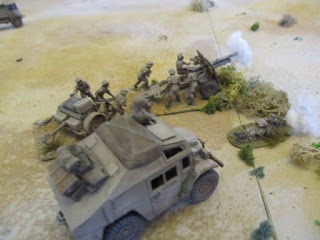 On ambush fire, intimidating the Semoventas 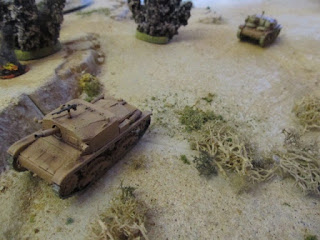 Here they are, sneak around behind the hill. 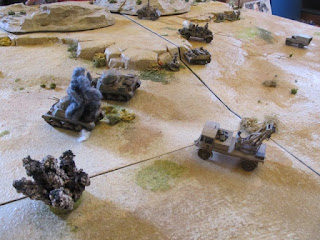 REME to the rescue in the centre 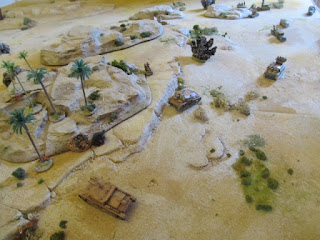 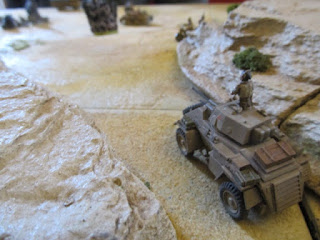 My Humber's probe up the jebel, very wary of the assault guns not far away,
but making a pain of himself. 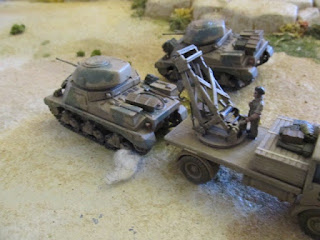 The repair truck does its job. M3 back in action!

After this, technical issue with the camera, I have more pics, they just won't download for some reason... ah, the technology fails again... hmmm!