Fall of the Reich remains one my favourite Battlegroup periods for gaming, I just like the ‘backs to the wall’ feel of the German lists. This is a short campaign, of maybe 5-6 games, set over 1 day, as Combat Command A, US 3rd Armoured Division, attack to surround and capture the town of Erfundensdorf, part of their advance to help seal the Ruhr Pocket.

The campaign works as a series of morning, afternoon and then evening battles, with the earlier battles deciding from which direction US forces will be able to deploy and attack the German defenders in the big final game, to take the town itself. The first game, table 1, would be a push from the south via the reservoir’s lake-side forest trail, at the See-Hotel. 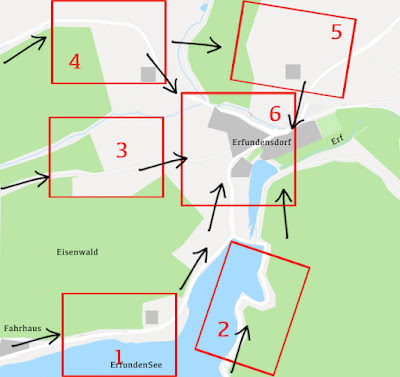 The campaign map. 6 tables to fight over.

The German defenders, that’s me, would be an ad-hoc kampfgruppe of various parts, including Fallschirmjager cadets of ‘Ersatz Battalion Richter’, the local Volkssturm ‘Erfundensdorf’ and reinforcements arriving from the Paderborn tank training school, Stossgruppe Schutz (my armoured reserve arriving in the afternoon via table 5).

We played out the first morning game, a 500 point affair using the End of the Rat Race scenario. Here are the two lists for the game.

Battlefield 1- Lakeside road and the Seehotel
The forest road running west to east along the edge of the lake, from Fahrhaus to Erfundendorf via the resort Seehotel on the lakeside. North of the road is wooded, the edge of the Eisenwald.

The US started as they meant to go on, their Piper Cub calling in 105mm artillery around the hotel, and braving incoming 20mm cannon fire from my flak truck, failing to roll any 5+’s (another theme of the game). The Piper Cub never failed a coms check all game, I counted 8 in a row!

The leading Sherman Jumbo trundled up the road, and pushed into the trees, machine guns blazing to in my Fallschirmjager screen that was spread-out through the trees, (some in foxholes). Their infantry followed, in skirmish line through the trees, advancing to contact and then using their fire superiority to cause a lot of pinning… my MG-42s just couldn’t get going to return fire. Finally his tanks arrived, two up the road, one through the trees, which encountered my Fallschirmjager, was pinned by a 105mm HE shell from my StuH, which had come forwards to engage, and when hit by a Panzerfaust (which glanced off), the crew fled, abandoning the tank.. a small victory.

Meanwhile, at the hotel, my FJ platoon HQ was shelling the road with 120mm mortar fire, causing some pinning and destroying a US .30 cal MG team. It was an uneven battle through, incoming 105 shells raining in, with a direct hit on my MG team in a foxhole, blowing them all up (terrible cover saves), and pinning my flak truck. Which was unfortunate for him, because when the US unpinned, then pulled an Air Attack counter - and then rolled a 6… incoming P-47 with rockets, racing low over the lake. Achtung Jabos!

My reinforcements had started to arrive, my StuG and the Volkssturm platoon. The StuG was instantly the P-47’s target with rockets, and first victim - kaboom!, not a shot fired by my best armour. It wasn’t looking good.

The US kept up the pressure, his tanks machine gunning up the trees, and one rushed the minefield along the road. Taking a hit (strength 1) it rolled clean through the explosion and opened up on the Volkssturm squad rushing to hold the road block, an objective. In a furious blast of MG fire 8 Volkssturm were wiped out on the road, their bodies piling up. Ouch!

In the woods, the infantry fire fight was being won by the US, there 60mm mortar adding some pinning as one squad of FJ cadets broke and ran. My Panzerschreck got a clean shot at the Jumbo, only to see his rocket glance of the front glacis!! That doesn’t happen often! Return MG fire killed the ‘schrek team… and my BR was not looking good.

The P-47, now unpinned again, came round again, skimming the lake. Again my flak hammered and in an uncharacteristic display of good, dice, 2 more hits and 2 more damage points, the P-47 was shot down! It nosed into the lake in a huge splash and that's 2 counters for the US player.

It wasn’t enough though, more 105mm shelling at the hotel and my second FJ squad being wiped out was enough to see my defenders over their BR total. The Volkssturm and FJ survivors retreated back towards town. The US had reached only 20 from 30 BR… so a solid win. They had their objective and the route into town from the south was secure. We’ll do it all again, on the other side of the lake in game 2, where a US recon troop is probing the south-eastern route to town and looking to capture the reservoir’s dam. My Volkssturm will be trying to put up a better fight next time (with some better dice, I might burn these ones!).

Here are a few shots of the action, and our campaign map. 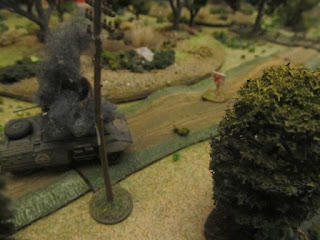 US recce armoured car hits a mine on the road and starts the battle. 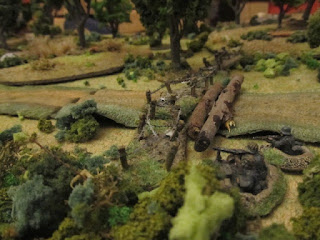 Roadblock  and MG team in foxhole 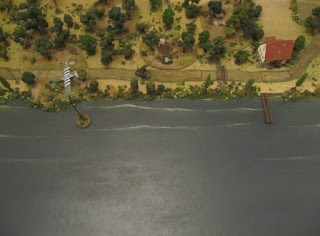 The battlefield, a narrow fight 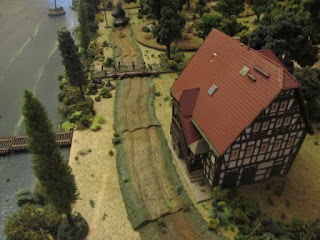 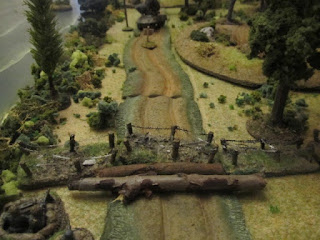 Here they come, the US armour as arrived 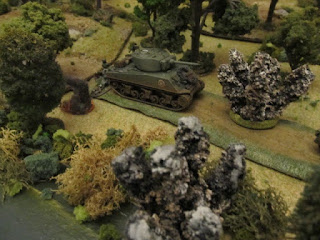 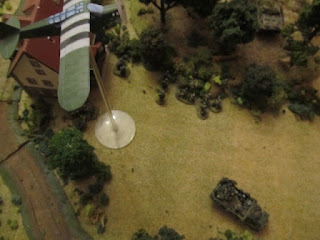 Piper Cub spotter, a pain in the butt... flak truck below, trying to hit it. 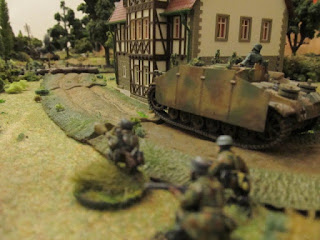 StuG arrives along the road at the hotel, lining up the distant Shermans 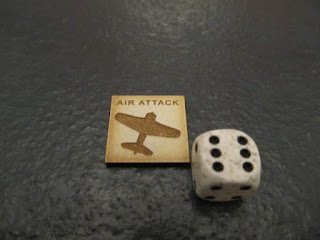 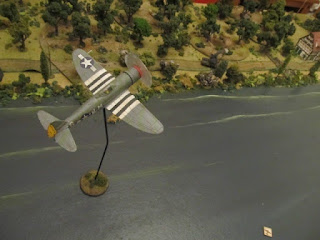 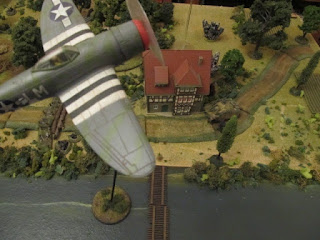 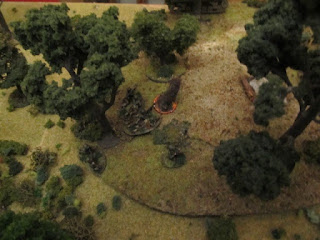 US armoured infantry (leaving their half racks behind) to advance on foot through the woods. Pinned. 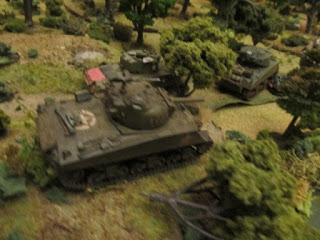 Shermans stack up on the track 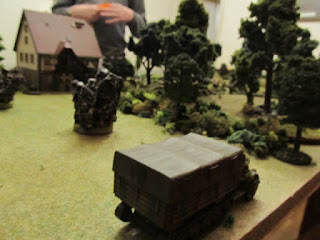 Back in the hotel grounds, my resupply Maultier arrives and makes bee-line, risking incoming 105 fire, for my StuH. 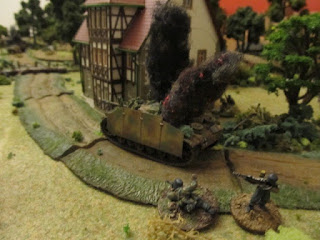 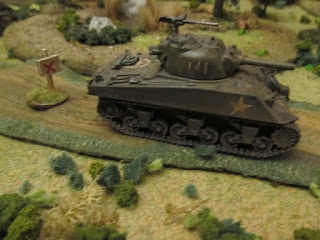 One brave Sherman rushes the minefield and survives. 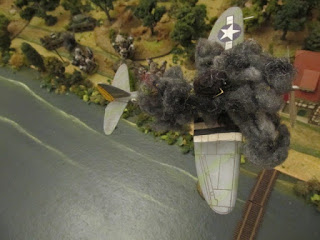 My flak truck blasts the P-47 out of sky on its second pass.  Hurrah! 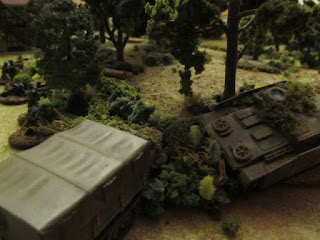 Maultier meets StuH to re-arm in the trees. 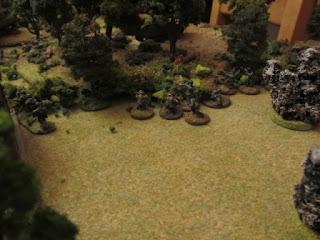 Volkssturm continue to be pounded by arty fire in the hotel grounds. This would be second line of defence, but their morale gave out before the US advance reached them. Time to go!