Second battle of the FotR mini-campaign, on table 2 of the campaign map. This would see US forces advancing on the east bank of the ErfundenSee reservoir, towards the dam, to open up a south-eastern route into town (and deployment for the final game when it comes). It was 400 points, using a Delaying Action scenario.

The forces came from our pre-campaign deployment, Both players have had a central pool of forces to divide up between the tabletops, with the Germans including their Defences. Once both sides had chosen where their forces would be placed, there was then a small number of additional points for things like off-table guns and counter-battery fire etc, that would be available to any force on any table. The forces I had pre-chosen to hold this winding track around the lakeshore were another of my Volkssturm platoons (I have 6 in total for the campaign), supported by both my captured 35S French Somuas and some Hitler Youth. Being a very narrow table, I hadn’t placed many defences here, just the road block, some foxholes and barbed wire. Add to this were off-table 105mm guns and a PRTP to cover the narrow width of the forest. Not much, but a lot of Panzerfausts for the tight fight on the road and in the dense forest. (we revised our ‘forest fighting’ house-rule, this time max range would be 20”, but from 10-20” would be suppressing fire only, only 0-10” could be Aimed Fire).

Coming the other way, the US had chosen this southern-most attack route for their light recon forces. A cavalry recce troops (from the Wacht am Rhein book), supported by 3 M5 light tanks, a M36 Jackson for serious hitting power and off-table 81mm mortar support. They also had a single timed 105mm barrage, so that would prove unpleasant on such a narrow table (actually when it landed it killed 1 sniper, being a bit mistimed).

With the tabletop laid out copying the map, objectives positions, (just 2, the road block and the road where it exited to the dam) and my defences and initial deployment in place, the US started, M5s leading the way.

The battle would play out in two mini-engagements, along the lake-side track and through the forests. The first US probe was up the track, and it soon turned bad for them. My other sniper, hidden behind the log roadblock, did good work pinning the M20 scout car with bullets whizzing overhead (and stopping his main mortar spotter), and when my off-table 105s unleashed the track rapidly became a mess. A M5 was knocked out, then an M8. His M16 AA half track was next, and didn’t spot my Panzerschreck team on ambush fire. It took a rocket on the nose and was destroyed. So far so good for my Volksturm, but then the ‘schreck team had an Ammo Low counter played on them and, finding that was it for their 88mm rockets, the Volkssturm decided they’d done their bit and headed back for town. My best AT weapon had just legged it! Can’t trust these Volkssturm.

In another piece of good fortune, all my reserve forces arrived at once (double 6s!). On rolled the pride of the Panzerwaffe, two 35Rs carrying the rest of my Volkssturm platoon. The Hitler Youth squad arrived too, heavily weighed down by Panzerfausts and moved off deeper into the woods.

It had been a good start for my defenders, holding both objectives and damage done, I was 2 chits to 6 up… but then it all changed.

Finally the US got some mortars firing, the M2 now unpinned, and in doing so they drew a Air Attack counter, then rolled a 5. Oh joy, another ‘Jug’ winged in, rockets ready. The USAAF was putting in a big show at Erfundensdorf and frankly, I’d like to play a game when I wasn’t under P-47 attack! But such is war, in it came, up the lake, its first rocket strike missing and blowing up some trees. It would be back.

The US attack, now a mess of wrecked vehicles on the track had stalled, and the jeeps and another M5 moved into the woods, to get off the road, 3-man recce infantry teams dismounting to avoid taking their Jeeps into battle. Here the infantry fire, mostly suppressing fire, started with my dug-in Volkssturm, who had the better of it. But that M5 wasn’t coming within Panzerfaust range, and its twin MGs would not be silenced. It was now the target of my Hitler Youth teenage tank hunters. They got close enough and fired 2 ‘fausts, and both missed! Then got pinned by returning Garand rifle fire. Then the M5 spotted them twice and unleashed .30 cal machine gun death, wiping out the kids!

Things started to go down hill, the P-47 came round again, and targeted an 35R on the road, 5” rockets smashing it to bit like a sledgehammer to crack a peanut! Next order, the M36 lined up the other 35R, needed a 6 to hit, and did. Ouch! 90mm AP smashed the other 35R into a burning scrap! No more armour. Then, more MG fire from a recce jeep broke my Volsksturm squad who ran - cowards! That left the roadblock objective held by a single sniper. An M8 advanced up the trial, but the snipers ambush fire pinned it. Phew… but my defence line was crumbling. The P-47 would back strafing with its many MGs next turn and all I had was infantry… poor infantry. US mortars also got going again, spotted by the recce troops HQ. In my turn the only unit not pinned was my Forward HQ and his Kubelwagen at the back. Great! Just unpin then.

In the end, I couldn’t save the day. My Volkssturm had to abandon their foxholes to get a last ‘faust shot at that M5, counter-attacking. he must be close to breaking. The Panzerfaust hit - yes! Then glanced off - what! The M5 survived and then hosed down my squad, breaking it. And that counter was enough, my force was broken and the US had won again. A very narrow one this time, by just 3 BR points, but task Force McLynn had open he forest track into town. Damn those Jabos!

Some photos of the evenings actions, we played for 2.5 hours, including a tea/loo break, so a quick game. Here are some shots of the board and action. 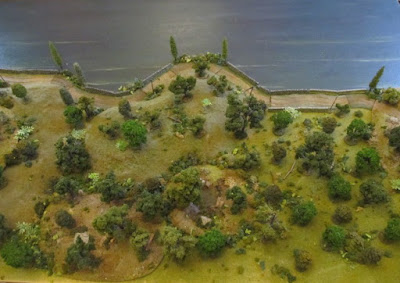 The battlefield, US from the left, Germans from the right 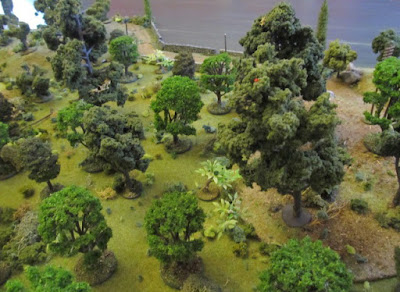 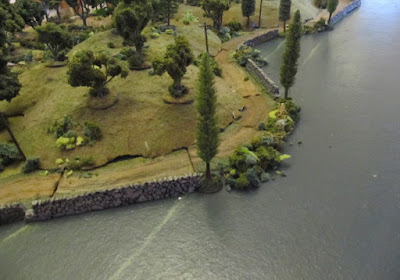 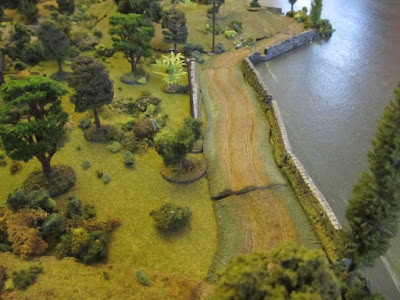 The German end of the track 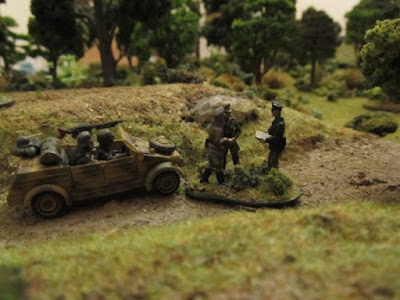 German CO and his transport, calling in the 'tank' reserves 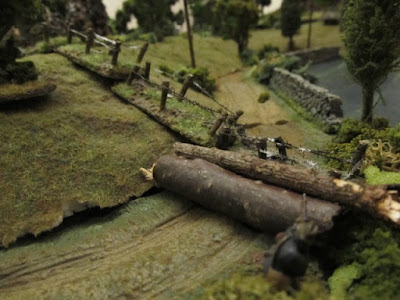 At the roadblock and barbed wire. Sniper lurking. 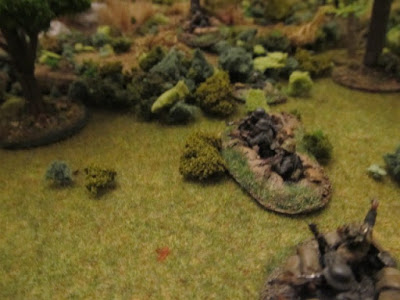 Volkssturm in foxholes in the forest 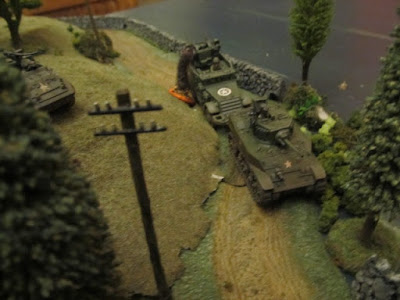 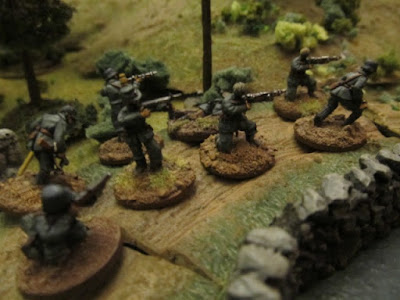 Volkssturm squad on the move to the roadblock 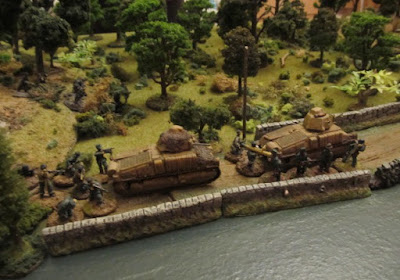 All German reinforcements arrive at once, R35sandn tank riding Volkssturm 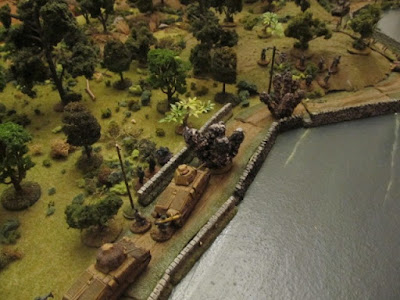 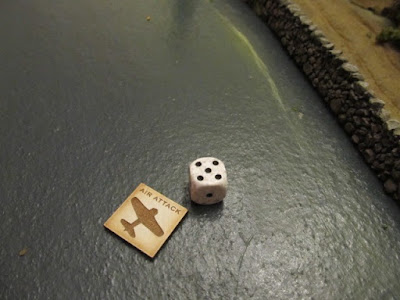 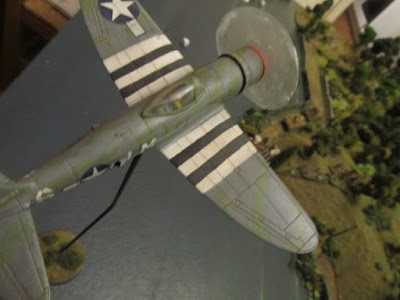 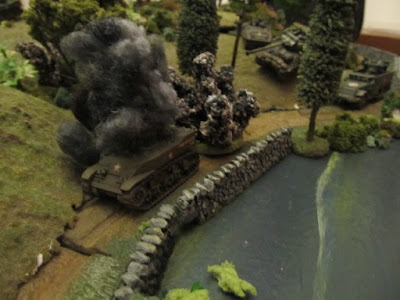 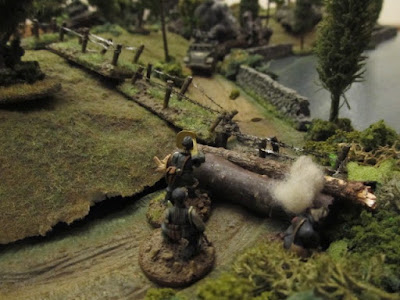 Panzerschreck team take-out the M16 as it rounds the corner 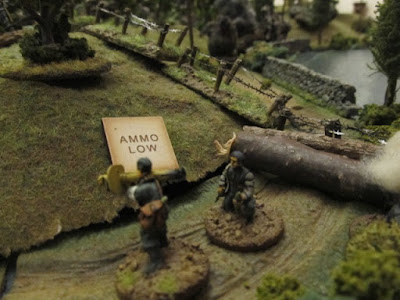 Then immediately run! Out of rockets. 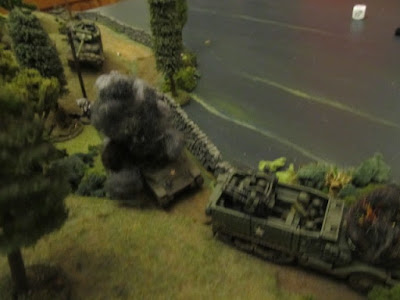 The wrecks on the road back-up. M36 Jackson on the way next. 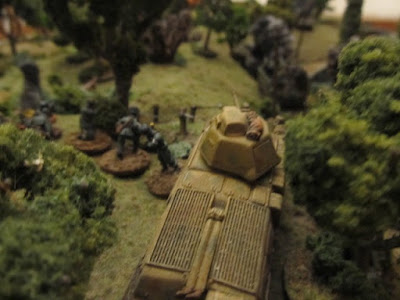 35R sneaks up the hillock to get a crafty shot at the M36, and regrets the return fire. 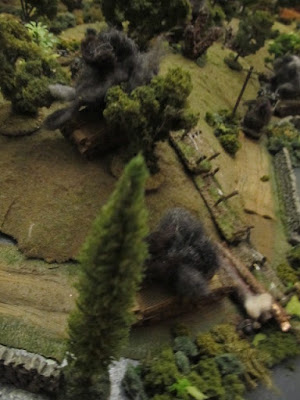 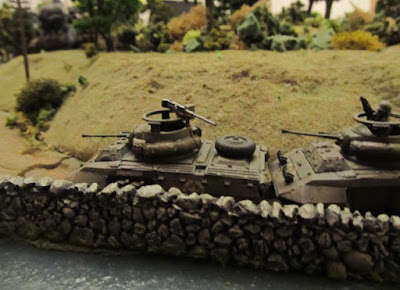 as the M8s arrive to press for the roadblock. Ahead is an inferno. 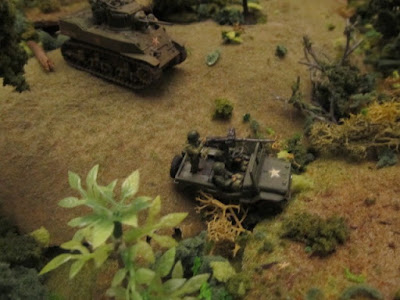 Recce jeep adding its MG firepower in the woods, where the last of Volkssturm are out-shot and forced to surrender or run. 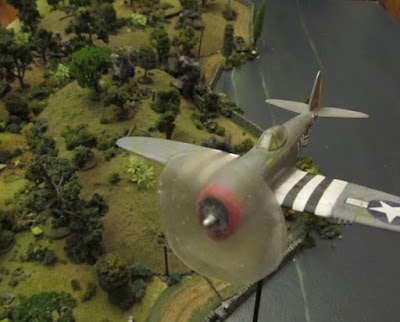 
In the campaign this means, in the final battle for town the US will have deployments zones in the south-west and south-east corners of the table. On to game 3, the attack through the Eisenwald along a foresters track, enough of the lakeside battles. I have some better armour deployed here and better defences, so lets hope for a win… my losing streak goes on.
Posted by Warwick at 14:09