The game was a 800 point meeting engagement, US 1st Armoured Division vs DAK, and the randomly generated scenario was a Flanking Attack. The US tankers were approaching the outskirts of the town Maknassy when DAK forces launched a spoiling panzer counter-attack to help hold the town and the important mountain pass beyond.

The DAK force was a real mish-mash of armour, from a Pz II, several Ausfs of Pz IIIs and IVs (one lang, one kurtz), a captured Valentine(wild) and a Tiger (eek)… so a bit of everything, 9 panzers in all. They’d be facing 3 Stuarts, 3 Lees and 3 Shermans (and god knows how I’d stop that Tiger). Infantry; I had an inexperienced armoured platoon in their half tracks, the Germans, reg grenadier platoon, all just tank riding to start with. I had invested points in artillery, with an off-table 105 battery and a T19 battery (with required supply truck of course). His was again a mish-mash, 2 timed 105 strikes, an on-table 80mm mortar (that proved a real pain) and a 150mm Bison (and required resupply truck of course). He had a timed Stuka strike… I had no air support (unless I could get lucky with chits).  For recce; for me, just 2 jeep teams, one with an MG, one as the officer and arty spotter (handy with guns to call-on). He had thus out-scouted me, with an 8-Rad, sniper, kradschutzen MG team (Kettenkrad subbing in for Zundapp and sidecar), and his own recce officer in a light car. First chit to me for the scouts. In all, my BR total was 47, the DAKs, 56… one well, that off-table artillery is expensive, brings no BR, but hopefully it would do its pinning business when I had my spotters in place.

My plan, after rolling the scenario, was to try and use my Stuarts and half-tracks speed to get to those objectives. With his recce troops out front and waiting tank support, I thought I could jump them early, out-match them with my light tanks and destroy them in detail to get to those objectives and harvest counters. Meanwhile my recce would hang back, call in artillery fire on the town and harass his tank’s advance. Then, when my tanks had arrived, I’d attack  towards town, but only against well pinned enemy tanks, who would be under all those 105mm guns ever turn. Those guns were key, keep them firing, I had 5 artillery spotters on the table to do so. Hopefully, I was playing to the US’ strengths.

It started well (for the Germans) with the first turn, out-scouting me, taking objectives and his first Bison 150m shot scored a lucky direct hit with one of my recce MG jeeps - messy. 4 counters before I had a go. Grin and bare it, my first turn and I got the guns firing into the edge of town. A lucky deviation resulted in the lurking Bison taking a direct hit and being destroyed - result! That shut him up!

Initial skirmishing complete, Panzer IVs arrived and they moved to his right, my left, to reinforce his recce troops. But they had a long way to move-up, so I still went with plan A - attack, attack… my Stuarts rushed his recce troops, MGs blazing, and his recce screen tried to fall back. His sniper was killed, the 8-rad armoured car shot from the rear as it tried to escape (bouncing 20mm shells off the M3’s front armour as it went), his MG team was wiped out in another 105mm stonk… and his recce commander was pinned, then a turn later wiped out. Only the 2 soft skinned transports escaped the mauling, withdrawing off the table to save the imminent extra counters.I took the objective too… so that was 4 chits for the Germans (take that!).

It had worked, but now my Stuarts had 2 Pz IVs to face down (including the ‘special’ on ambush fire) and the captured Valentine. A tough nut, and it became cagey… both waiting on ambush fire for the other to come forwards in a Mexican stand-off. At least I was still shelling him.

In the centre his Panzer III N and Tiger were in close co-operation… a timed Stuka strike KO’d one of my Shermans (large bomb, direct hit!), but my artillery was now becoming dominant (and using a lot of my Orders)… but pinning his Tiger each turn. So far had got 1 shot off, a miss. The Panzer III N took the table-centre objective, and was then KO’d in another artillery stonk. My plan was working. We had a short break (for tea), and I had taken 7 counters… the Germans 12… US on top.

After the break, the German fight back began. My artillery so far had rolled really well… now the luck changed and the direct hits dried up as did the pins on enclosed armour. On my right, my recce artillery spotter team had to evacuate their post, jumping back in their jeep to fall-back, when 2 Pz IIIs came looking for them. I countered that with my Lees, moving up to engage. In the first exchange of fire I lost a Lee, him a Pz III, and then we both began failing ever penetration roll required after hits… glance, glance, glance…  that dual would continue for the rest of the game. A lot of 37mm ammo was used to little effect.

The fight was now on my left, my dismounted infantry pushed up, captured the central objective, but the artillery support let them down for a turn, and suddenly they were under heavy MG fire from panzers, pinned, then the squad was wiped out. The Tiger’s 88 roared again and another Sherman, which had been furiously using HE to try and keep it pinned, was turned in burning scrap. Lost that dual.

Those Panzers IVs finally tried to break the stand-off on the left, moved forwards to get lines of sight, I missed with the ambush fire (drat) and the 75mmL48 gun wrecked the platoon HQ M3 with ease. My return fire did KO his PzIV kurz with a side shot… still, that ‘special’ was too much for my 2 M3s, and they had to pullback and lurk out of sight again. It was now very close… but the tank fight was edging the German’s way. His annoying Valentine scored a 6 pdr-kill on one of Lees, but was then out of ammo (and it has no MGs!). It was useless now and withdraw back to town. The Tiger then rolled forwards to claim the centre objective back again, and that last counter pushed me over my BR total. The Germans had lost 50 BR from their 56. I had lost 48 from 47. A narrow German win… 2 more counters (maybe) would have done it! We had inflicted 20 counters each on each other.

4 hours of play and a really good game. After a bad start I was right on top at the tea break, and the DAK were a bit glum (mostly because his Tiger had been pinned for 4 consecutive turns and drawn 4 counters just to unpin it). My arty had was causing havoc. But the German tanks then showed their quality and edged the tank-vs-tank engagement. His slightly better BR had just won it for him.

Here are some shots of the Maknassy battlefield. The edge of town, surrounding fields and cactus patches, a farm, and two rocky-topped ridges over a shallow valley. Next time we’ve decided to go Ostfront, 1941 with Barbarossa, my Russians will be defending on day 2 of the invasion.

And finally, some snaps of the game in progress. 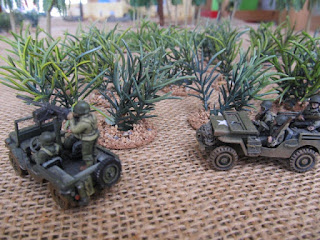 US recce watching town from a cactus patch 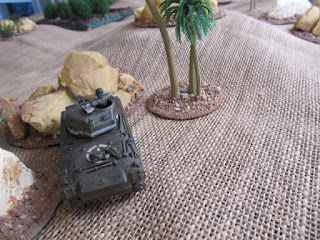 Sherman on high ground watching the valley into town 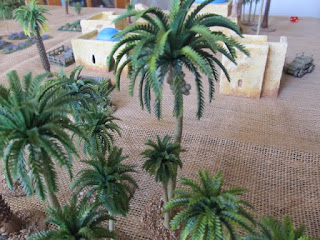 The edge of town, DAK arty spotter lurking in his funny little vehicle.
His job, to spot for the Bison was soon redundant. 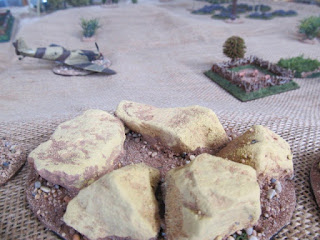 Rocks on high ground, over looking the central objective, marked by the crashed Spitfire. 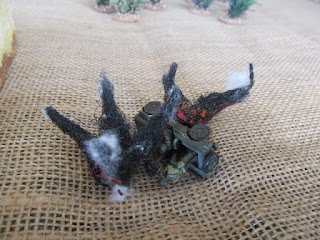 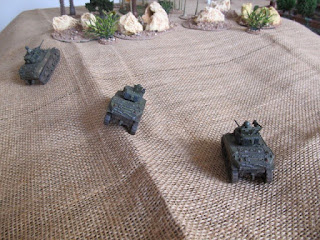 M3s arrive and charge to tge opposite valley side, where the DAK recce are lurking.
(OK, my M5 models are standing in for M3s, not something I'd usual do - must paint M3s) 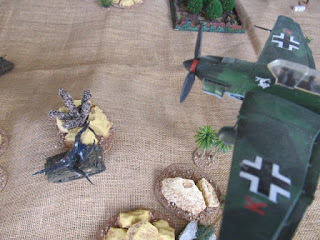 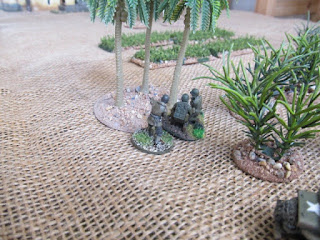 Recce officer and arty spotter in place to watch town and get those guns firing. 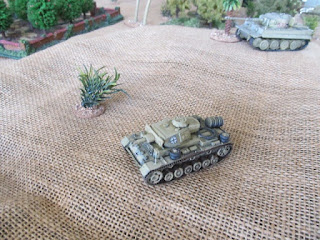 Tiger and his little buddy move towards the centre objective. 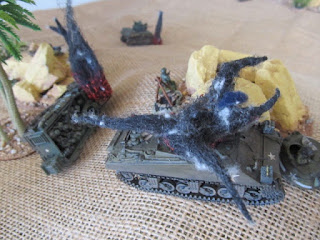 80mm mortar shell wrecks an M3 after unloading its MG teams into the rocks,
to cover the infantry across the valley. A single 80m mortar would continually score direct hits. 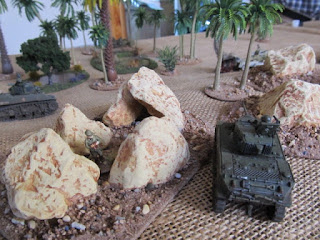 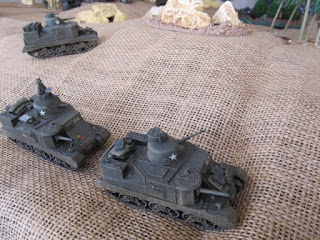 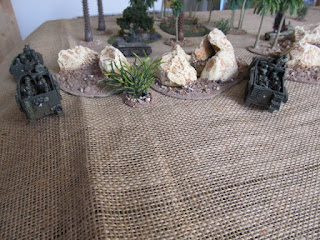 US armoured infantry takes the far ridgeline, swiftly moving up behind the M3s
and claiming an objective. 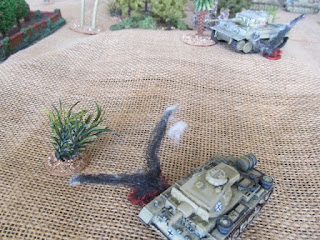 Arty pinning... the bane of the Tiger (and soon to kill the Pz III N). 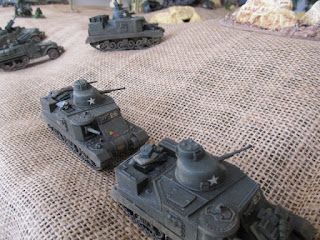 Almost ready, M3s, with T19s arrived behind and firing a lot of shells over the ridge. 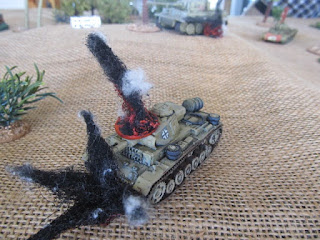 One scored a direct hit! 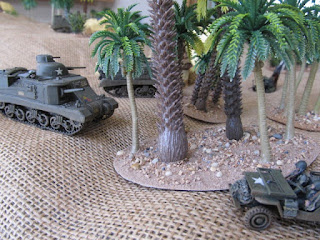 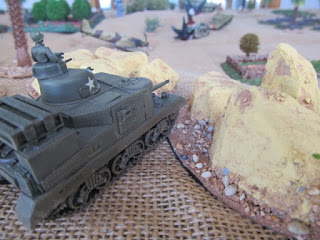 Lee on higher ground with great LoS. Until the Valentine spotter him and it turns out,
the 6 pdr is pretty good at tank-killing. 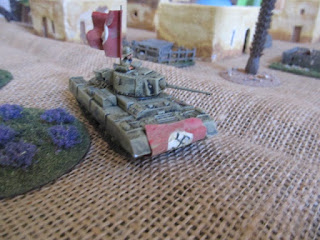 Annoying to be KO'd by your own side's equipment. The captured 6 pdr Valentine. 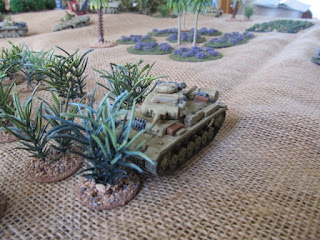 Pz III in the cactus patch, it survived 4 hits which glanced off (I cannot roll 6+ on 2D6). 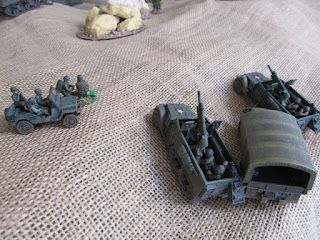 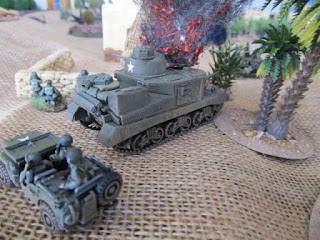 Pz III gets another Lee. 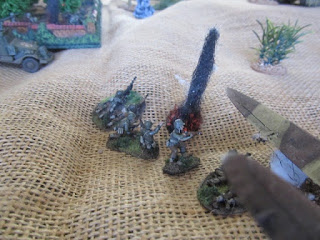 US infantry get to the central objective, but are quickly pinned, then gunned down. 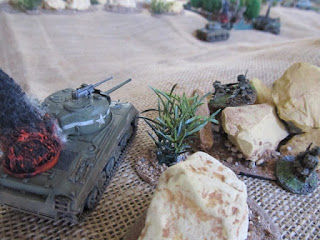 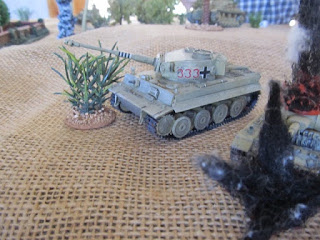 DAK man-of-the match, and still haven't ever actually killed a Tiger on the tabletop.