We have resumed our FotR (roughly April ’45 I think) campaign set at the small (made-up) town of Erfundensdorf, from earlier in the year. The arrival of Spring and the cricket season meant Friday evenings were not longer free for BG gaming, so we put it all on hold until autumn, except for this Saturday evening… basically, we had some free-time so sneaked in the next game.

So far, the US armoured division attempting to surround and take the town has won all the previous 3 games, but have only really been facing some ersatz equipment, local Volkssturm and a single veteran fallschirmjager company stiffening them up. The US tanks and recce taskforces have captured 3 approaches to the town itself and today would be after the main road from the north-west, HelmingstraBe… and clearing the German strongpoint holding it at the Rubelzahn farm.

The defenders (me) would again be the last of the FJ, a platoon dug-in into foxholes, behind log barricades and holding the well-fortified farm. They had a Hetzer, PaK-38 and an ’88’ with them covering the road which was also blocked by a minefield. Reinforcements would come from town in the shape of more Volkssturm and 2 Jagdpanzer IVs (only L48s though). My big hitters were off-table 150mm Nebelwerfers.

The US’s heavyweights of Taskforce Elgar were tasked with clearing the farm and road. An M26 Pershing platoon, backed up by M36 Jacksons, an armoured infantry platoon, off-table 105mm guns and a flanking force of 3 more Shermans and one of the infantry platoons tracks. Their mission had a high priority because from here they can encircle north of the town and cut-off the road leading east, where German reinforcements are on the way, fail here and those tanks will get through automatically… breakthrough and they can fight the next battle to try and stop them in campaign turn 2.

This would be the last of the 4 morning battles before moving into the afternoon.

We used the Strongpoint Attack scenario, slightly adapted, with roughly 750 pts each in a platoon-sized game.

It started with the US dropping in their first arty fire, to little effect and the FJ all getting onto ambush fire. A 105 shell did pin my 88 - unlucky.

The first turns would be cautious, with the US lacking orders (twice rolling double 1), and some long range AT fire from me to no effect. The US decided, given his tank-heavy force, that KOing my AT guns would be his priority and targeted them with lots of HE suppressing fire, keeping their heads down. A few turns of rest-bite from the US arty soon ended and farm was under fire, spotted by the armoured infantry platoon HQ away at the back - an easy day’s work for those guys.

I had off-table 150mm Nebelwerfer fire to launch and did so, causing some pinning and destroying an unlucky Pershing with a direct hit. My PaK-38 got a shot off and KO’d a Jackson that had ventured out of the woods and into the open ploughed fields. So far so good, but my 88 couldn’t get any shots off, and when it did, failed to spot (a lot of smoke and dust from those arty and werfer strikes obviously).

The US infantry pushed towards the farm but, in a rookie move, dismounted from their M3 in front of a 2 ambush-fire waiting MG42s. Caught in the crossfire the squad routed, leaving the M3 to trade bullets for the rest of the game. Short on infantry the attack was stalled, but hammering away at range. Both sides had an ammunition problem, no supply trucks on either side. My lurking Hetzer peaked out at the farm to take a shot, glanced a shell of a M26’s front armour and was hit by 90mm return fire from a Jackson, brewing it up. Oh well, it only had 1 shot left anyway.

So it went, a duel at long range. The US flanking force drove in and added their weight of fire to the shelling, and the arty zero’d the farm and pounded it to rubble, pinning most inside. My Volkssturm platoon arrived, woo-hoo, with 1 squad launching a quick counter to hit a Pershing with their ‘faust., only to again glance but pin it. More werfer fire, more pinning, 1 M3 half-track destroyed and the US chit counter was building. Then disaster for me, my Pak-38 was hit by Pershing HE fire and the gun destroyed - the crew ran… drat. Then an AP shell hit my ’88’ (a 6 rolled) and smashed a 90mm hole through it… again the crew ran. Double-drat.

All I had left was my 2 JgPazner IV, and as they rolled on to engage, an ambush fire long range snipe from the distance Jackson (in the woods) hit and KO’d one on the table edge… 90mm guns are rather good. My last AFV fought until out of ammo, hit and glanced off a Pershing, then KO’d a Sherman … then withdrew ammo pins empty. I had no AT shots left and was being pummeled. When a FJ MG team was machine gunned down the resulting chit broke my BR total of just 32. I had inflicted 36 BR loss of the US, but their total was 44, still 8 short. My defenders had hung tough and fought it out, but in the end, they had to give up that farm, another narrow US win.

Here are some pics of the actions. On to game 5, Taskforce Elgar trying to intercept my reinforcements before we get to the grand finale of the campaign, game 6 and storming the town itself from various directions in an ultimate Hexenkessel. 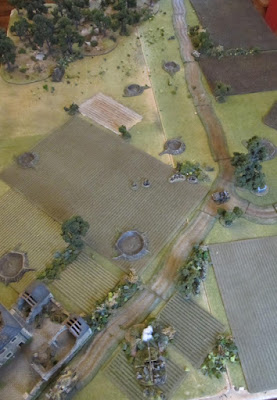 HelmingstraBe and the Rubelzahn Farm from above.
FJ deployed at the bottom awaiting the US heavy-weights. 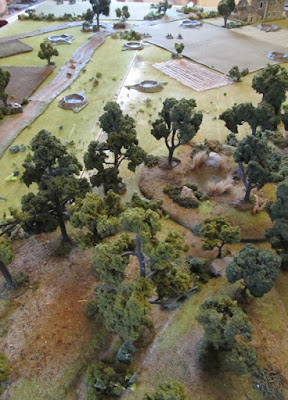 US end of the table, heavy wooded, then open fields. 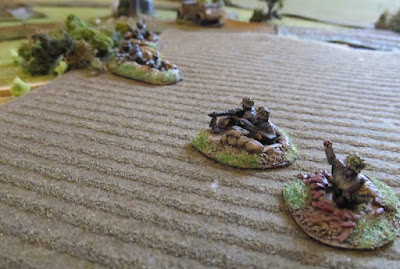 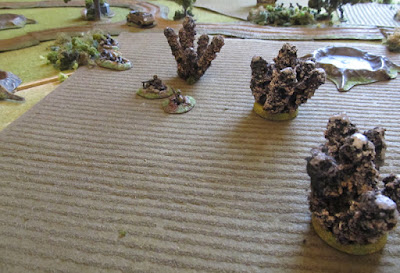 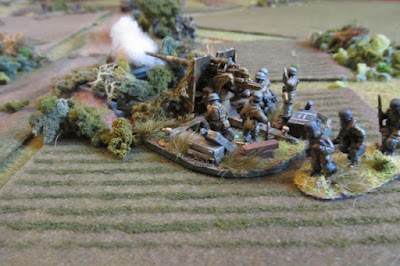 FJ 88 awaits on ambush fire, with a loader team, in a gun-pit. 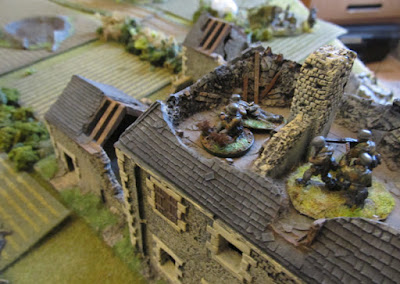 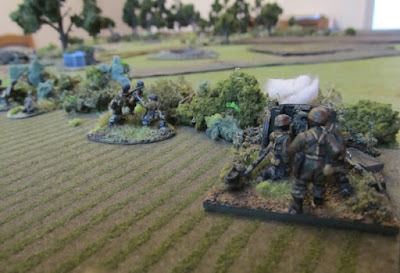 Pak-38 on ambush and the rest of the platoon. This 'hedge' had a ditch, making it hard cover. 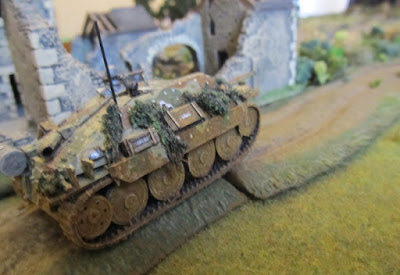 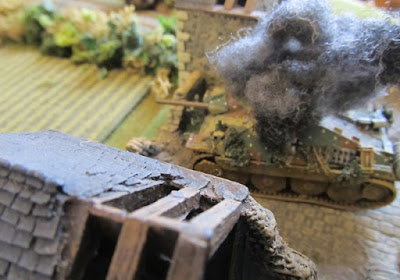 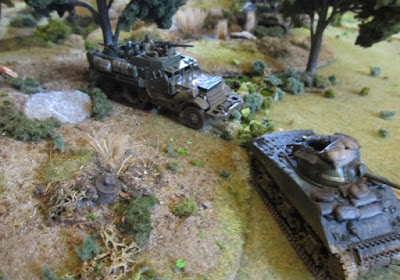 Armoured infantry claim an objective (marked by KO'd Sherman), on the edge of the woods. 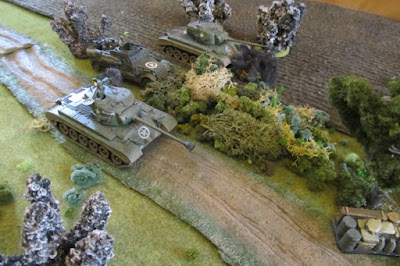 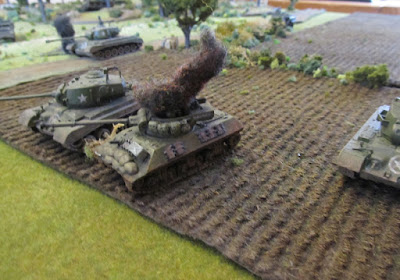 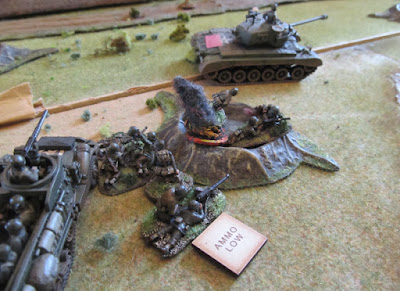 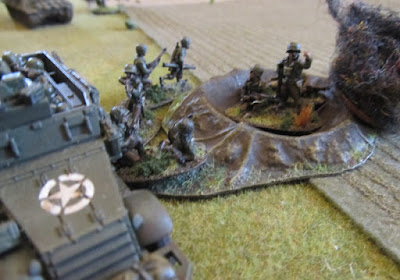 Squad out! Pinned, then MG42s cut them to pieces quickly. 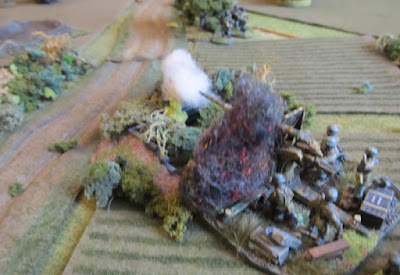 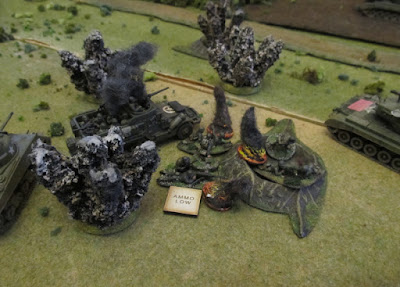 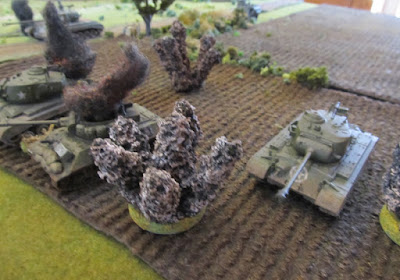 M26s push on through the ploughed fields on their left, firing as they come. 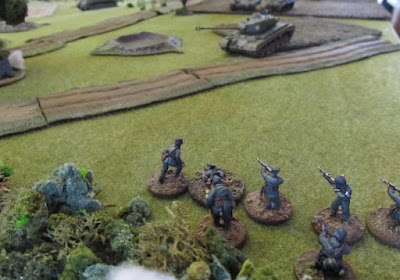 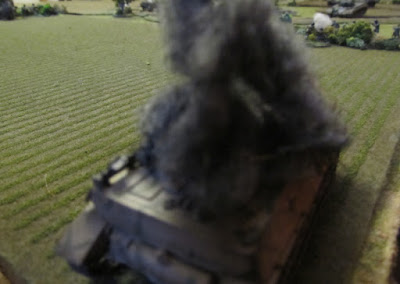 Jgpanzer IV arrives and dies... long range sniper shooting from a Jackon at 60". 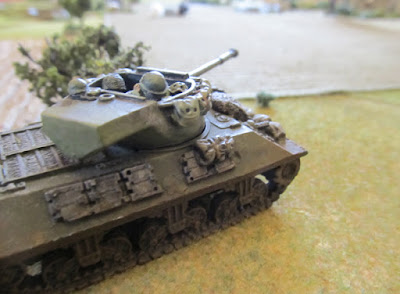 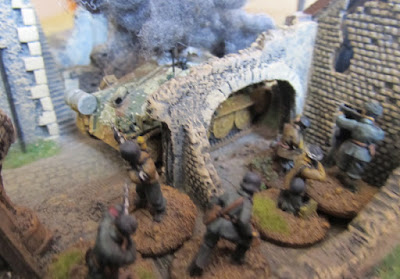 Volkssturm reinforce the farm, hiding in the barn from incoming artillery. 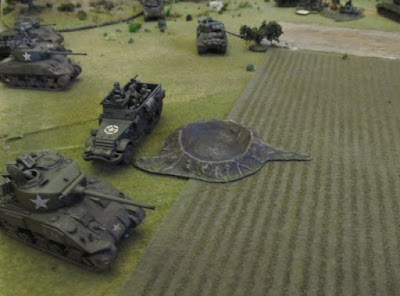 US armour in place, shelling and MGing all before them. 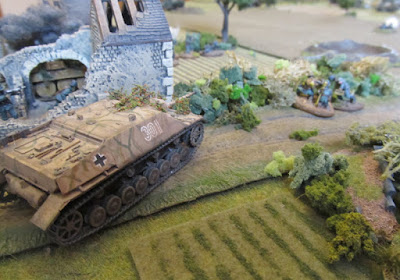 Last of the defenders runs out of ammo, time to go... another small patch of the Third Reich lost.