Play-testing in these times of lock-down has been, well, all but impossible and that’s a problem with a new game system that needs to be played to see what it throws-up but also, just how it feels when the dice are rolling and models moving on the tabletop. This has set-back my work on Nam ’68 for a few months, oh well… can't be helped. It'll get there in the end.

I have though co-opt my eldest into trying a few games with me to test the rules as I have them. It was useful, first a brief history lesson, that could have been entitled, American Foreign Policy Blunders, 1960-1973. Second, in game terms, it caused me to do a fairly major revision on the ‘actions’ system, which whilst OK in small games, was just too slow and clunky when there were more models on the table. Detail I want, but the game mechanics as-was just felt time-consuming to me, especially in a ‘fast-paced game of close-up firefights and ambushes’. The counters set was revised to, as the values were just too high, making the game feel too random and possibly too short. But, the scenario generation system worked well.

The first game was a small, 1-squad affair, but in a high treat environment, so the VC were tough, well equipped and up for the fight. The second was a larger game, 2-squads from the platoon plus support, but in a low threat area, with only a few local VC guerrillas to worry about (plus all the booby-traps and lurking snipers, etc). Nowhere near as determined though.

The intention is that the scenario varies by size, by location (first was in jungle-scrub, second in marshes/wetland), and by threat level, so either low, medium or high, and that sets the VC forces that will be encountered. Better equipped and larger forces in higher threat than low.

The mission in the first game was a stand-up firefight, where the VC were determined to make a fight of it, and they did. The US patrol got something of a bloody nose. The veteran Platoon Sergeant was KIA, bled-out as the medic reached him but couldn’t save him. Another fire team's corporal was also hit by bolt-action rifle fire, clean head-shot and thus going home in a body-bag. Having been refused armoured support (twice), the US patrol pulled back, called in for air and watched the grid get napalmed. Bad day at the office. The body-count was not one to make Battalion HQ happy.

The second game was a patrol sweep through a small fishing hamlet, with search points to locate and clear. It was held by a few local VC and a sniper in his hideout, who was something of an ace, as he quickly put 2 GIs down, one dead, before a WP grenade posted into his hidey-hole finished him off. The village itself was weakly defended, but the search points revealed nothing. In the end, with the LT and RTO calling in mortar fire, the few VC ran for it rather than be shelled, leaving just 2 dead behind - the cooked sniper and one VC with a PPsH hit by M16 fire. Not a good body-count day again.

That felt like a good game, very Nam, the med-evac rules got a run-out and two wounded GIs were lifted out of the marshland reed beds to hospital during the game, which was fun side-story in the overall battle.

With the right sound track playing in the background, it all felt very 'Vietnam War'… and work will continue to make it ever more so. The game's campaign system is up and running - Tour of Duty sees a player run through 12 months in action with a single platoon to control. My test platoon (1st Platoon, Bravo Company, 1/18th Infantry) have had a tough few months. So far, 5 months in, they are claiming 25 enemy KIA for their body-count, with 6 KIA, 6 WIA and 7 NBCs lost. Kill-Ratio of 4.1-1 is good… and morale remains OK, not great, as the loss of the Platoon Sergeant was a heavy blow. Some R and R is due… but not forthcoming, so the next mission is an airborne one, so in ‘Slicks’, a chance to use my Huey model.

Here are some quick shots of the two games. 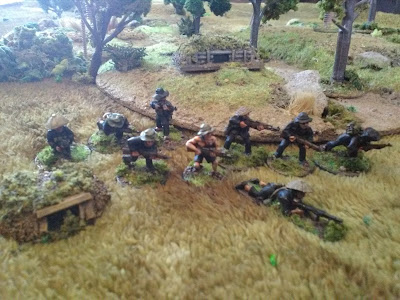 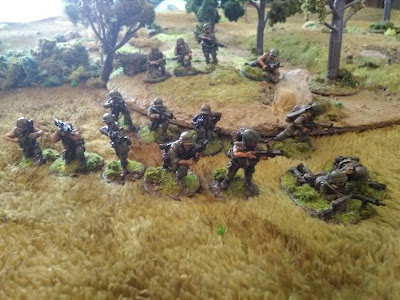 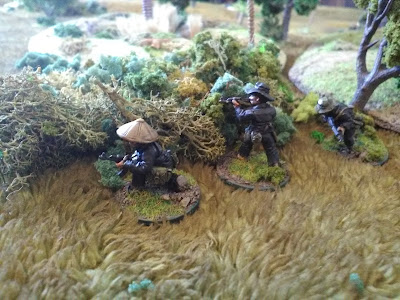 Hidden in the undergrowth 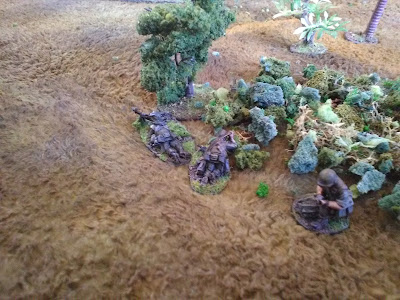 The 60 in place to give suppressing fire, medic lurks behind, out of LoS until needed. 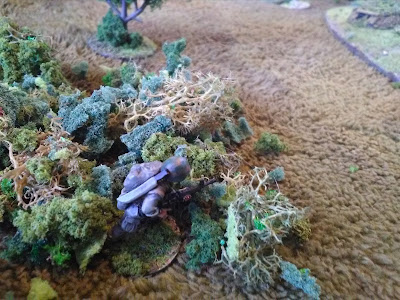 Hunting Charlie, trying to get close enough to the small LMG bunker (top right) to throw a grenade. 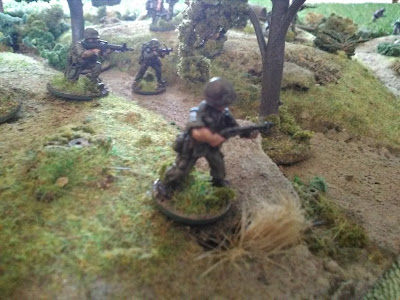 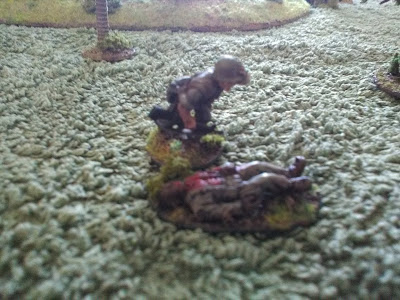 Man down, sniper fire from a hidden bunker.
One man runs to move the wounded out of the line of fire and hauled him to the chopper. 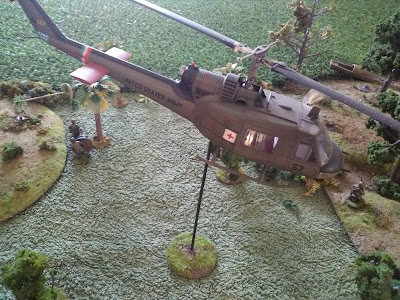 Med-evac chopper arrives and circles down to the reed beds, clear enough to hover. 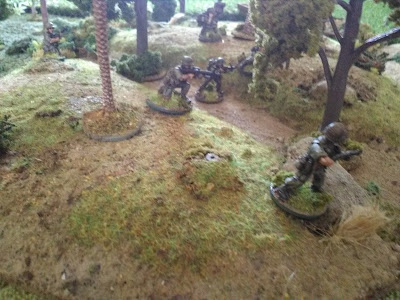 Pouring on some fire into the village from the trees. Little coming back. 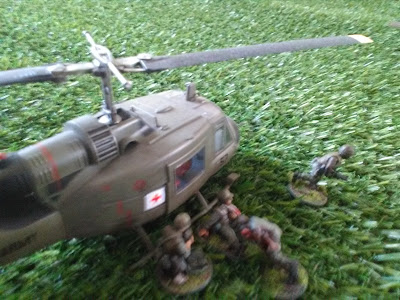 Slick hovers over the reed beds (all obscuring cover in this game), as the two wounded and lifted onboard. 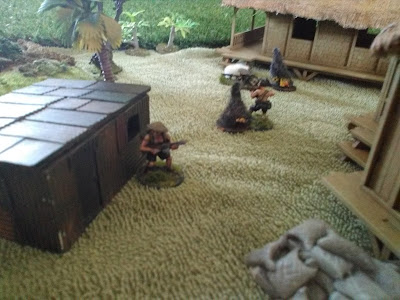 The fishing village is mortared, causing some pinning, but that's enough of a fight for the VC today, they run-off. The US search finds nothing of any importance, except some fish. The 3 civilians that started in the village all soon ran off too.