Lock-down has meant time for miniature painting has dramatically increased, as for many gamers I'm sure. This though, has meant a few old projects have been finished, along with the back log for Vietnam skirmishes, a new 20mm German infantry platoon and few other 'shelf queens' cleared out. I found myself without much to paint (disaster). I am not one to have huge numbers of unpainted miniatures piling up (obviously, we all have some). So, after a few weeks off from painting, I've decided it was times to start with something fresh. Something new, something I'd only attempted in these strange times. A new army for a new period.

My earliest wargames, back in 1982-83, were using Charles Grant's Napoleonic rules, photocopied from the back of a library book and using Airfix soldiers bought in the toy shop. They were the first games we ever played on a table, with dice to resolve the action (rather than rolling marbles). We were young, the games were terrible, but a small group of local boys were all busy buying and daubing Airfix men for Napoleon's battles (many were not actually Napoleonic soldiers, we had ACW cannons, Bedouins on camels, some French foreign legion troops!).

So, back to Napoleonics. I've avoid it for years, mainly to concentrate on WWII as my main period and getting everything I wanted for that. But my WWII collections are massive now, so, after just 38 years, its time to go back to fighting Napoleon.

I was tempted to just collect my first wargaming army again - British, for Waterloo. There are lots of plastics now, good ones too, and it would be pure nostalgia for me, but I've be doing my research and reading David Chalmers' 'Campaigns of Napoleon', a hefty tome suitable for lock-down. Inspiring stuff, I decided to rethink. British are a well trodden path, always popular with Anglophile wargamers (and we won). I went off the idea and started to lean towards something else. It couldn't be the French, which would have been my first choice, just because you get some much use from them and can fight everybody, but my main opponent already has a large 28mm French army - he's collected it for years. So no French, and 28mm is a must.

In the end, it came down to one of two, Prussians or Austrians (all very Germanic). Caught on the horns of indecision, and wanting to get on with it whilst I had the time, I flipped a coin... here are the first results, as I test out my painting plan for mass production. A lot of painting to do over the next 8-9 months, I'm planning 200+ infantry, 50 cavalry, 10 guns. That should get me a fight-able force for 2021... when campaign season opens. 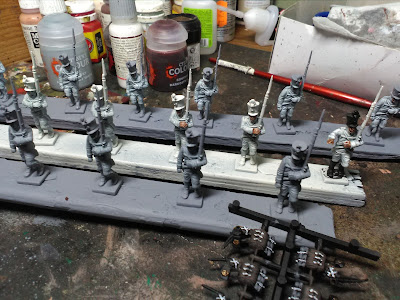 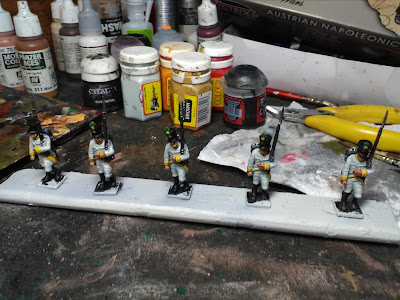 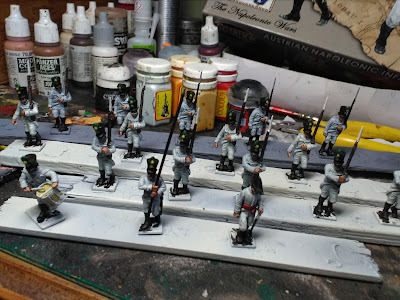 First batch of Victrix Austrians as a test, various ways of getting a quickly shaded white base. Working on 50 at a time, and 2 months for each brigade to get finished. First battalions well on the way.

Rules of course have already been started too.