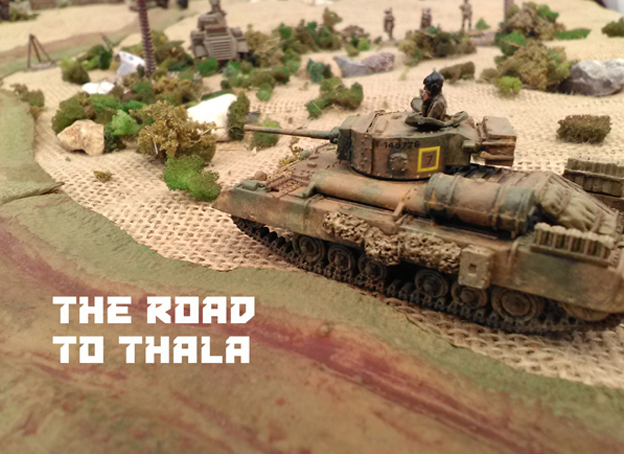 A 500 point Battlegroup: Torch game, with the British defending in a ‘Defence Line’ scenario, as 10th Panzer push up the road out of the Kasserine Pass towards Thala. My Brits had to stop/delay the Germans as extra forces and artillery (lots of artillery) moved into Thala behind them.

My force was selected as 500 points from the British Infantry Division ’43 lists, with one minor tweak  I could take individual Crusader tanks as the 17/21 Lancers were operating mixed Valentine/Crusader platoons at the time… weird, and not that effective I think, mixing the light, fast cruisers with the slow infantry tanks. Still, ammo was at least standardised as little 2 pdr shells.

Here was my picked force:

1 Sangar (for the Vickers HMG)
2 Minefields

The Panzer Force was (roughly):


Having placed objectives, one on Point 31 and 1 on the road, the Brits deployed their defences and extra units into the central third of the table, ready to hang-on until turn 5 and the reserves arrived in the form of my 25 pdr battery and the tanks. Until then I had 2 AT shots on the table, the Humber’s Besa and the 2” mortar - so both barely count (but can pin)!

I used the 2 minefield to narrow the table and force him up the centre, along the road, to where I hoped to place my tanks to meet him. The 25 pdr battery was to deploy and lurk behind a hill and use IDF, but after generating the terrain, that wasn’t going to work, with no useful hill to hide behind. So they would be used for emergency direct fire instead, covering the road. The timed strike would impact directly between the minefields, hopefully as the tanks moved through.

The infantry screen would fight and fallback as best they could, onto the arriving tank support. The Vickers MG, on Pt 31 in its rock sanger would cover them and pin anything it could moving on the road, the olive grove and/or shepherd’s hut.

The Germans arrived with their recce 222 and 250 and one Pz III, it crept slowly up the road, and my ambush fire from the 2” mortar pinned it! Woo-hoo… first shot of the game.

The 222 moved through the olive grove and got into place to get on the radio to mortar point 31. I was mostly on ambush fire, waiting the storm.

Turn 2, and the the mortaring started, well 80mm anyway, 120’s had radio issues. No problem, my boys weather it with just a pinned 2” mortar team. The Pz III moved up again and the Humber opened fire, Besa-ing away with everything he had and hit! Needing 11s for any AP effect, the rolled - 12! The Humber bagged the lead Pz III - that never happens! First tank kill for the day to the Derbyshire Yeomanry! More German mortaring pinned the Vickers team int their heavily shelled sangar.

Now the German reinforcements rolled in. Well, 1 of them… a truck with infantry and the HMG team. They de-bussed and ran up the slope, left, for the Shepherd’s Hut on high ground. Inaccurate long range rifle fire from me didn’t stop them.

The Germans slow advance continued on turn 4, with 1 more reinforcement, more truck-mounted panzer grenadiers, this time heading through the olive grove to be pinned behind the wall of the goat-paddock by my waiting riflemen. They lost their supporting 2” mortar to another mortar hit… first British losses.

My screening infantry had done well, but under heavy mortar fire it was time to pullback, except one section (No. 2) was pinned by German MG fire and couldn’t. Problem, they were still in the timed 25 pdr strike’s danger zone.

Turn 5 and my first reserves arrived, the 25 pdr battery, to get set-up and start the dish-out the hurt in HE and, if they got the lines of sight, AP shells. No Panzers to target as yet though. My timed barrage landed and, due to the failure to actually arrive, not many Germans were around, bit of pinned was it, and some unhappy British infantry, lightly shelled by their own side!

Things started to heat up… the Panzers now arrived and pushed forwards behind the curtain of mortar fire, my Vickers team still in the thick of it. My 25 pdrs opened up HE suppressing fire down the road, that got his mortar spotters’ (he had 4 of them!) attention. My FOO, useless here, got in his Carrier and raced off back up the road for Thala, wise men, and saving the lost counters for random mortar hits.

The battle was fully engaged now, all my tanks rolled on, with his in the centre on the road, 2 of mine went up the left, over the hill, led by the Crusader (of course, far faster) and with the last infantry section in support. Two Valentines were on the right, trading fire at range with the Pz IIIs.  Both sides hits glanced off… interesting one this, better gun vs better armour, pop-gun vs thinner armour… very even.

We were in the thick of the action now, as his 120mm mortars shifted fire onto my 25 pdr battery, but failed comms tests or a few big deviations meant my guns survived the next few turns, hammering his infantry in the rocks and at the shepherd’s hut for much pinning. I lost the Crusader pinned by a Pz III hit, the crew abandon it… and the Vickers team had now broken, Point 31’s objective was advanced on and taken by his armoured recce team and some grenadiers. On counters taken it was even, I maybe had an edge, but the unpinning from the mortaring had cost me dear. When his HQ Pz III rolled up to the high ground to join the tank fight, a 25 pdr AP shell at long range tore threw it. 2 counters would but me ahead, except the counters were an Air Strike and a Breakdown.. so zippo for that! The breakdown was played on my portee’d gun, but rolled a 1, so it was still clanking along. The Air Strike rolled another 1, so no Luftwaffe, thankfully. The Stuka model remained on the self at the side.

On my far left the Valentine, slowly moving up to get side shots at the 2 Pz IIIs by the road  was the victim of a Mine Strike counter…unlucky. But a Valentine did KO a Pz III when a hit caused the crew to bail, he only had 1 tank left now. My 25 pdrs were repeated pinned, by mortaring and then long range heavy MG fire from the rocks by the shepherd’s hut. My rifle fire, suppressing fire of course, wasn’t doing much back, but the Valentine’s co-axial MG did get some German infantry’s heads down.

So close, at about turn 10, with the portee pinned and both 25 pdrs as well, I had to unpin, but with only 3 B left it was risk. I might get away with it. I drew a 4.., damn, broken. Time to pullback up the road to Thala. 10th Panzer would not be far behind…

Great fun, a close game, although the Germans counter pulls were pretty good… 3 special counters was a big aid to him, but it could have gone either way. Nice to play my first game with (borrowed) Valentines… nice tank (waz gun). Really liking our Tunisia games, lots of variety, different forces, odd tanks, desert with actual terrain… way better than Normandy hedges imho.

Action on the Thala road…