Another friday evening, another chance for a Kursk game at my brothers, with two friends joining the mayhem. This time it would be a meeting engagement around a small railway halt - with the Germans threatening a breakthrough, I would be commanding the Russian armoured counter-attack.

My force, picked for mass-effect, consisted of 2 motorised rifle platoons all riding on the engine decks of 10 T-34s. These were support by a sniper, a jeep recce team, a BA-64 (my recce) and a battery of 82mm mortars (on table). My only other support would be a timed air strike from a PE-2, which was to arrive on turn 4 to target the main railway building with its 8 bombs.

The German force consisted of a veteran armoured panzer grenadier platoon in their hanomags, a squadron of 3 Panthers, supported by a MG42 HMG team, 20mm SdKfz 251/17 FlaK, their battle group HQ (in a Pz III), a 233 armoured car, a sniper, a FAMO, and a supply truck. There was also a battery of 120mm mortars off-table for fire support.

With the forces picked, the table was laid out and deployment at table corners randomly determined. There were four objectives: the main railway halt building, the windmill, the abandoned bunker on point 68, and the road where it left the table on the southern (German) table edge (marked by a wrecked staff car). 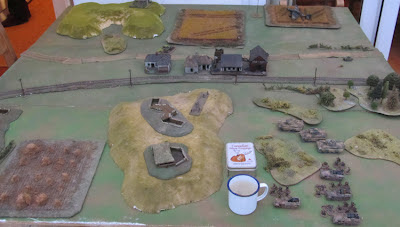 The table, complete with counter mug, dice tin, and the 'hopeful' Stuka model, just in case. This isn't deployment, just models waiting to get the game started! They are in the right part of the table though. Russians had the top left table corner.

Despite my 3 recce units we lost the roll-off for first turn and Germans began, with only their recce on the table, not much happened, except our sniper (in the windmill) took a maximum range shot at their sniper behind the staff car, a duel that would continue throughout the game in a pleasing ‘Enemy at the Gate’ replay, with neither getting the telling headshot.

This was just a side-story, the main event saw the Germans split their attack. As their forces arrived the main force raced for the high ground at point 68, and quickly occupied the trenches, supported by two Panthers on their left. The rest of the panzer grenadiers raced to the railway halt, supported by the 233. One Panther and the battlegroup HQ (plus supply truck and FAMO) lurked at the rear in reserve. 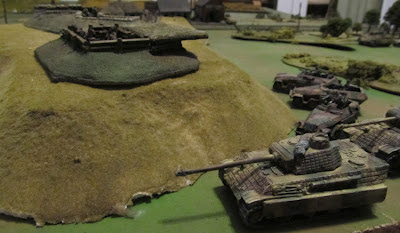 The Germans advance to point 68, Panthers rounding the hill on their left.

The Russian plan was to a-mass our arriving forces and hold back until we were all here, then unleash the avalanche, all ten T-34s would go straight at their main force! Go, go, go, for the point 68 was the order of the day. Once at the hill the tank riders would disembark to assault the objective of the bunker in overwhelming numbers.

The first turns saw the Russians mortars open fire on the hill, but generally miss wildly (this continued throughout, the gulag for those mortar crew). The Germans MG42 HMG team set up in the trenches and shot-up my recce jeep (must learn to hide soft skins better), and speeding forwards the Germans were soon in position. Meanwhile, our reinforcements arrived promptly (for once) and on turn three were ready to go. 10 T-34s burst forth over the hill, raced past the windmill and made for the railway line. Of course the two Panthers opened up, scoring a hit, which by great fortune glanced off – phew! At the railway line the weight of suppressing HE fire had both Panther crews rattled. The race was on! 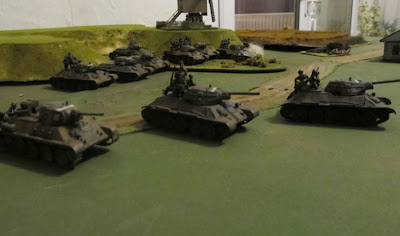 The T-34s looked like a unstoppable steel avalanche, and the German battlegroup HQ reacted by committing himself and the spare Panther to the hill. At the shortening range the German MGs opened up, cutting swathes through the tank riders, and 120mm mortar fire began to land amidst the tank attack, suppressing more infantry. 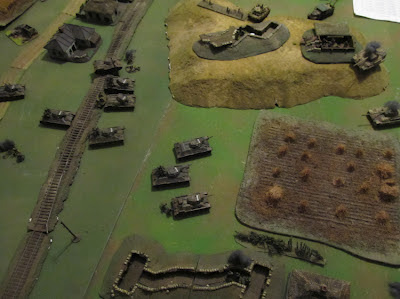 Still coming... the tank rush crosses the railway line, note both Panthers are suppressed (not dead - like that happens!).

The T-34s, HE rounds banging away like they were going out of fashion, pressed closely, and the first motorised infantry began to rush the hill. The first assault saw the MG42 team overrun, but not before taking 6 Bolsheviks-scum with them! The trench line fell in a second, then a third bloody close assault, as we swarmed over them, each time loosing men, but numbers were with us.

The PE-2 arrived, targeting the railway halt, now pleasingly full of Germans, only for the 20mm flak to score a lucky hit and drive-off the dive-bomber attack before we could unload on them! Drat, the air support had failed!

By now the German players were looking pretty down, the Russian tide had risen so quickly it seemed they had no chance, and their suppressed tanks hadn’t done much. Then it changed as they had a few good turns. Unsuppressed the Panthers roared, ripped into the T-34s and 3 were quickly burning, hit at point blank range. German MGs, including heavy flanking fire from the railway halt, saw more red-infantry die quickly, and our counters were building as the squads were wiped out. It was a furious close quarters battle. The 233 boldly joined in with its 75mm HE, suppressing a T-34, and another leading T-34 ran out of ammo on an ‘ammo low’ special counter. 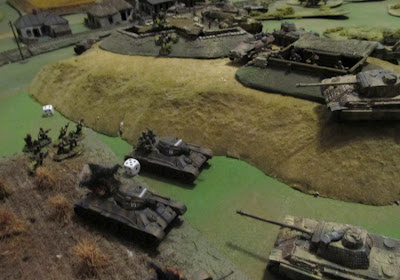 Point blank range, and a T-34 brews up. Infantry are already assaulting the hill top defences.

The red swarm suddenly didn’t look so powerful, with only 3 active T-34s left. These burst over the hill, passed the Germans, taking rear and flank shots, one of which destroyed the HQ Panzer III. Another suppressed a Panther with a rear shot that glanced! (How hard are these things to kill?). The two Panthers left in the fight had, luckily for us, run out of AP ammunition, and changed to targeting infantry with HE, causing more death and destruction at the foot of the hill. 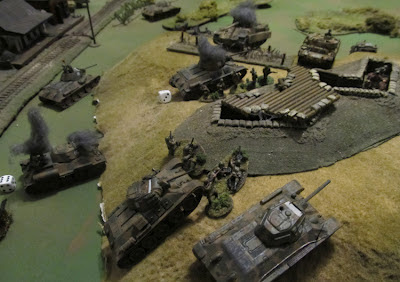 Up the hill, they just keep on coming. Note smoke markers are for suppression.

They Germans had decided that wiping out our infantry would bring them more joy that targeting the T-34s (and they were short of AP shots anyway). They pushed their 251s into the fight, using their machineguns (and 37mm door-knocker – which bounced off the rear of a T-34 – now useless are these guns?). On the hill we only had a few infantry stragglers left, not enough to take the bunker, but it didn’t matter – because the T-34s turned their AP shells on the 251s and quickly destroyed 3, which was enough to break the Germans, who withdrew, conceding the hill and the battle - victory to Mother Russian!

But at what cost? Of 74 red-infantry that started the attack, only 18 remained standing - slaughter! We lost 5 of 10 T-34s, and didn’t destroy a single Panther. 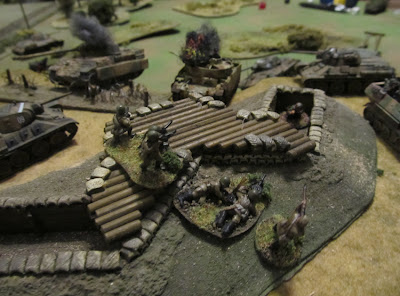 Chaos in close combat. Note the T-34s now behind the Germans, and the last defender of the trench lines skulking. The battlegroup HQ Pz III has just detonated.

The Russians still had 8 morale remaining, but actually the Germans could have won, because they held 3 of the 4 objectives, and the windmill had just a sniper in it. A quick move, even by the armoured car or a 251 against that objective could have snatched all the objectives on the table. Of course, in the pressure and heat of battle the 233 (which re-supplied twice and kept various T-34s suppressed, not a bad effort) was always needed elsewhere, but we should have left a T-34 behind to guard the objective, because a quick move would have cost us the battle!

In all it was cracker, a real pell-mell tank rush and swirling close-quarters engagement. The Panthers remained stoic (and didn’t break-down), and our infantry suffered from multiple German MGs, which scythed through them like corn. In all the Germans had only lost 14 men, a kill ratio of over 4 to 1 in infantry, and 1 tank, a kill ratio of 1 to 5 in tanks, but the Russians had paid the price for a victory.