THE BACK ROAD TO PFALINGEN 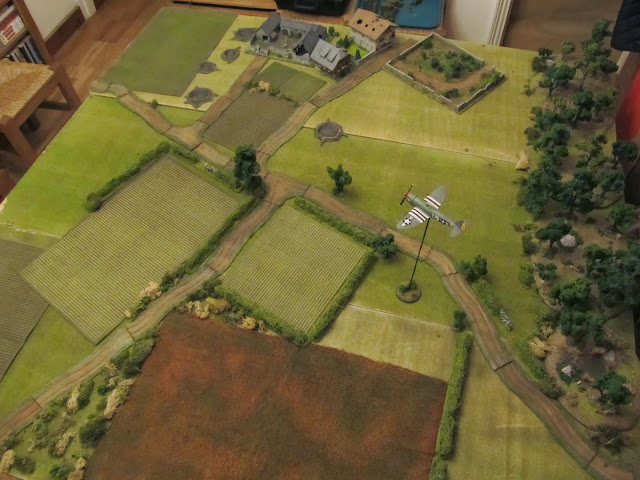 The battlefield. US approaching from the bottom, Germans would be deployed in the top half of the table. P-47 overflying pre-battle.

This was an ‘End of the Rat Race' scenario from Fall of the Reich, with the Germans dug-in defending as the Americans probed along the farm lanes towards the rural village of Pfalingen. The scenario begins as the American road column comes under attack, its forward recce (here an M5 Stuart) being hit as it approaches a road block on the edge of the village.

The German defenders (600 pts of them) consisted of an ‘Atypical ‘platoon of regular SS panzer grenadiers, dismounted and dug-in to two 10” lengths of trenches. Supporting them was a dug-in Pak40 (with loader team), a HMG-42 team, a squadron of 3 Panzer IVs, a 222 armoured car and an OP team spotting for an off-table battery of two 120mm mortars (ubiquitous these days it seems). They also had a few timed barrages up their sleeves. BR total 34.

The American column consisted of a platoon of three M26 Pershings, an armoured infantry platoon in their M3s, an artillery spotter with three 2nd priority requests, an M4A3E8, an extra infantry squadron in a truck, a Sherman ARV (as I was bound to lose a tank early doors) and the forward HQ also in an M3 halftrack. They also had a timed airstrike from a P-47 arriving on turn 7 (hopefully the deciding factor late in the game). BR total 42. They had to enter the table in march column order, up the road.

The US would take the first turn, but the Germans were all waiting on ambush fire. 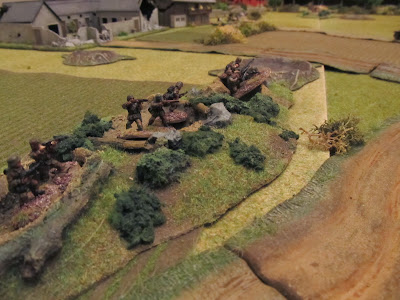 The Germans dug-in on their right. 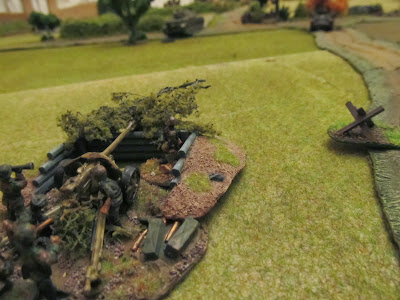 In the centre, the Pak-40, in the background is the burning M5. 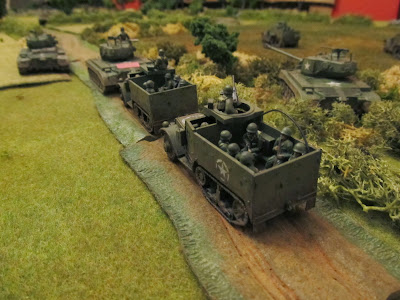 US march column arriving and deploying off the road for the attack. 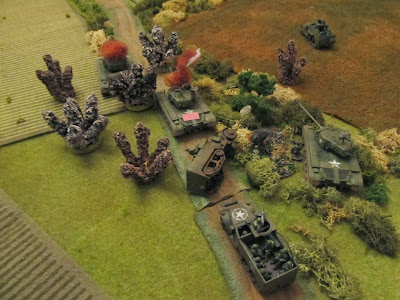 Oh dear, German mortars, werfers and the Pak-40 reap havoc in the first turns...
Well, I won’t got into a blow by blow account of this game. But it started very badly for the arriving Americans. Accurate 120mm mortar fire saw a direct hit lucky knock out the lead Pershing (drat!), and then destroy the following M3 half track, leaving the rifle squad cowering in the ditch, pinned. The mortar fire was followed by the screech of a timed ‘werfer barrage, which added a lot more pinning. The road was suddenly packed with pinned vehicles. The distant PaK40 flung some extra HE area fire at long range, aided by a busy loader team. Shells were going off left and right as the US struggled to get on the board.

The US, unable to get clear of the road for pinning, tried to do what they could as more units arrived behind them, pulling off the road to avoid the inferno of HE. 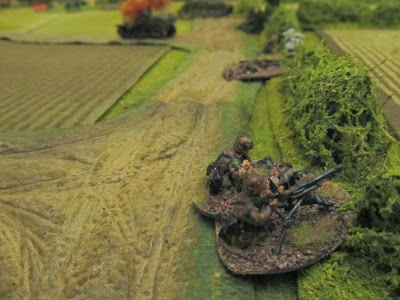 Grenadiers move up into the hedgerows to get a few early shots in.
Under return fire they fell back to their trenches again.

The Americans bad start didn’t get any better when a long range hit from the Pak 40 rolled an 11 and knocked out the second Pershing, so much for the heavy tanks! On the bright side, the German’s lone panzer ran out of fuel, and seeing the Americans massing up the road for the assault the crew lost their bottled and abandoned it. The first German loss and counter.

The deployment was a real struggle through the first few turns, under repeated mortar fire, then a timed 105 barrage, but luckily then the 120mm mortars just ran out of ammo (another special counter) - a blessed rest-bite for the hard hit Yanks. Now they could get on with the task of taking the fight to those trenches. 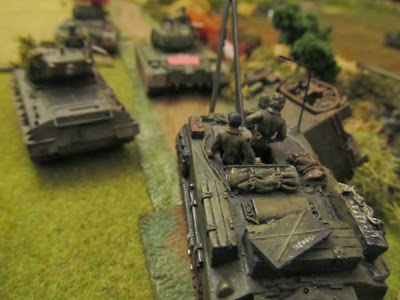 ARV makes it's way through the smoking wreckage on the road to salvage an M26.

The M3s broke into the open fields to the right and raced for cover in the hedges, with the FHQ getting into position to see the trenches and call in his own heavy guns - only to be turned down for 3 turns (the officer must have been screaming for his fire support by then – I was!). The last M26 got into position to see and engage the German’s first reinforcements, their second Pz IV, but their gun battle was inconclusive as we exchanged AP rounds at range. So far, the yanks had taken 9 counters, the Germans 2. Not good.

But now the game started to turn, good US command and control got the infantry moving, debussing and hitting the hedgerows, .30 cal MGs in place to lay down area fire ahead of the advance on foot. The Germans were struggling for orders, and their mortars fell quiet. The game went into a lull as the German reinforcements arrived and the US got into position to maximize their firepower. The scream of the first 155mm shells finally smashed into the German lines, leaving pinned infantry in trenches and a destroyed 222. The Pz IV behind was lucky to survive the heavy shelling. 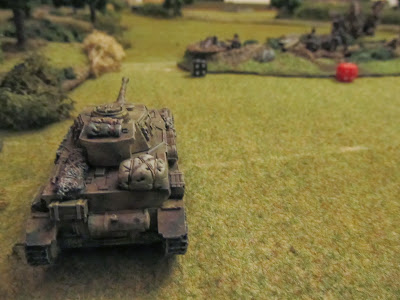 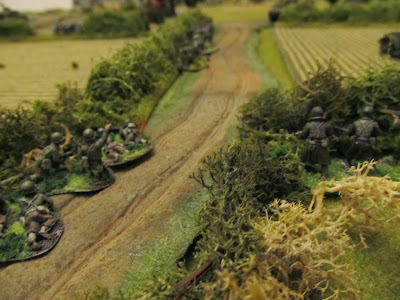 US infantry work their way up the road, under scything MG fire.

On the left, the M4 Easy8 exchanged fire with the last Pz IV to arrive, and lost... ho-hum... Shermans continue their poor performance. Meanwhile the M26 was out of AP ammo and withdrew to the ammo truck, the last of the US road column to arrive, along with the ARV which hooked up a knocked out and tank and dragged it off the table (getting rid of a counter for the US). Now it looked a bit more even... just 12 counters to 7.

Things took another bad turn for me when the PaK40 found its range against my forward HQ half track, some 53” away!  Not being out of range (something of a surprise that) meant the HQ halftrack became target number one (it was doing the arty spotting) and a lucky 6 rolled was a hit that saw the halftrack destroyed, and all 3 men inside with it become casualties too. That was 3 counters (1 for the M3, 2 for the senior officer), lost me an officer and my re-roll (every turn) for my command dice and the man in place to call in the big guns. Still, the forward observer was now almost in place at the forward hedge to take over that job.

Seeing the Pershing withdraw to re-arm, the two panzer IVs pressed forwards on the left and right, hoping to catch it without any return fire. On the American right the panzer crew didn’t realise that the lurking US infantry squad in their M3 (it had raced forward, seen the tank coming and swerved off behind the woods to get out of the line of fire), still had a bazooka. Now, the half track emerged from hiding and deployed the squad, who scrambled forwards into the hedge and lined up the bazooka on the approaching panzer. Whoosh – boom! A  hit and scratch one tank...

The panzer IV on the American left emerged from around a hedge to line-up the rear of the re-arming Pershing, but rolled a 1 to hit and the heavy tank survived. In its turn, re-arm complete, the M26 crew quickly swivelled round and returned fire, and another duel of AP rounds began.  To be honest, the resupply truck was an easy target for the panzer’s MGs, and it hadn’t reloaded the Pershing yet, so destroying that would have left the Pershing a sitting duck, so I caught a break there. 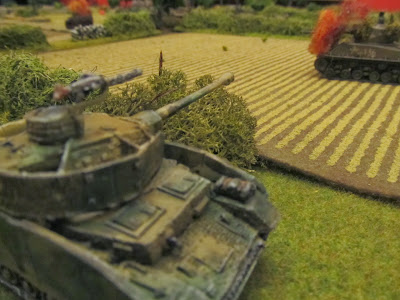 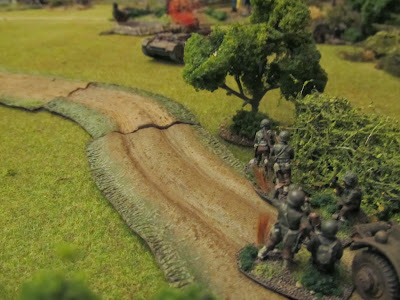 US armoured infantry debuss and take cover behind a hedge, then let the panzer
have it with their bazooka. One shot, one kill. 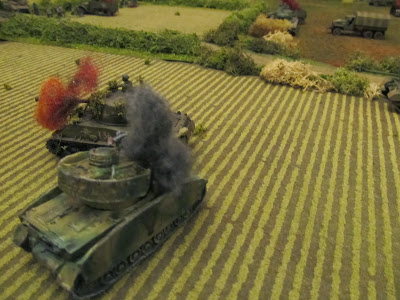 General Pershing scores a kill. The ammo truck behind was a sitting duck of a target
but mercifully wasn't targeted.

With only one tank left on each side the Germans were down to just their grenadiers in trenches, blazing away with their many MGs, whilst the US infantry used their M1 Garands and BARs to suppress them back, and a blazing firefight began, in which the US infantry held their own, thanks to ‘Fire Superiority’ from their semi-auto rifles.  When the Pershing finally scored a hit and knocked out the last panzer IV, the battle had definitely switched. The Germans were in trouble. Then it got worse for them, not only did the timed P-47 air strike arrive (but its bombing run went wild and missed the Pak-40 dug-out by so much the bombs landed off the table!), another P-47 also arrived, this time with rockets. Its first attack run saw all its rockets miss though... those flyboys were shooting very wild today. But still it was another counter for being under air attack (a 5 my opponent revealed by his groans), and now the German’s BR total looked dangerously close to breaking. There was nothing in it! It turned out the Germans were just 4 pts from breaking, as were the Americans.  But I had a tank, and an aircraft, and artillery to call in - he had just infantry and a single PaK-40. 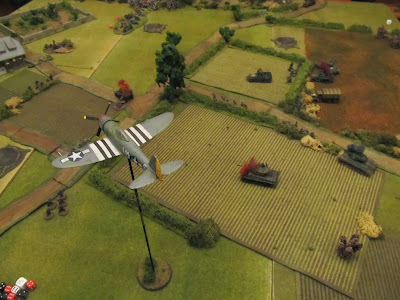 The USAAF arrives in force, hitting nothing but the ground! Damn them flyboys.

That gun became target number one for my next artillery request from my observer who had crawled into position on the front line. His incoming 105s shells thundered into the area, destroying the gun with a direct hit which its dug-out failed to save. Hurrah, but the Germans didn’t break! The P-47’s next attack run saw it miss with all its rockets again (how realistic!) and then take a hit from smalls arms AA fire, which the aircraft’s morale roll of 1 saw it return to base – useless, useless, useless! 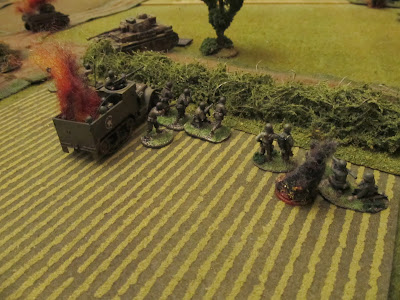 US infantry on the front line. The panzer IV is abandoned due to lack of fuel.
The M3 was another Pak-40 victim. 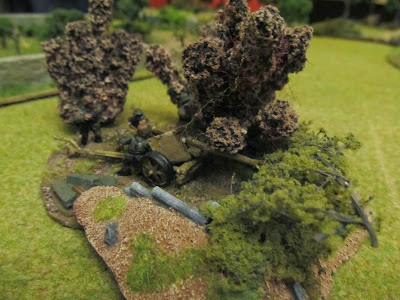 The German player’s gloomy demeanour perked up, the air threat removed, and in his turn an MG team’s concentrated fire wiped out one of my rifle squads in the hedge. Disaster, I drew a 4, and my battle rating was done. The Americans began to withdraw, the back road to Pfalingen had held (by just 2 BR it turned out – 1 more counter).

Well it was a really close and hard fought battle for 3 hours. The US got off to a terrible start, and then came right back into it. Another turn and they would have won, I’m sure... but such are the fine margins.  Those grenadiers could thank their entrenching tools for victory, the trenches had saved them and kept them in the battle way longer that the mere hedges my infantry had for cover. Still, if either of my aircraft had hit anything, then maybe it would have been a different outcome, so I blame the USAAF.