July 11th, and Panzer Lehr launch a major armoured counter-attack against US forces advancing in the Vire river valley. This refight is for part of the attack which branched off the main assault towards the village of Le Desert to seize a crossroads at La Charlemenerie. The US defenders (tank destroyers supporting infantry) fought all afternoon to halt the advance, until reinforced by 3rd Armoured Division’s tanks and USAAF air strikes halted the panzers.

Here is the battlefield. US at the top, Germans from the bottom. 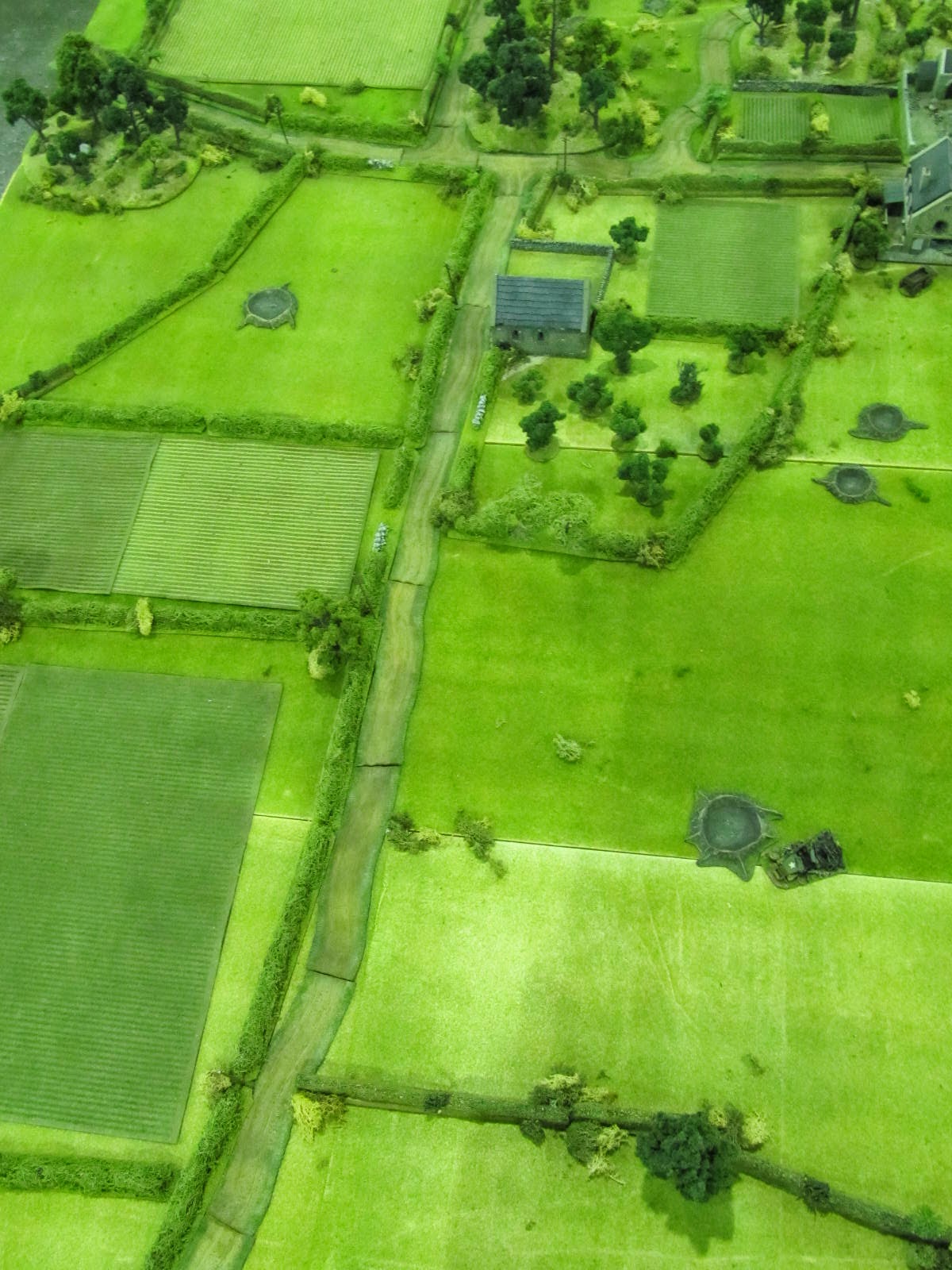 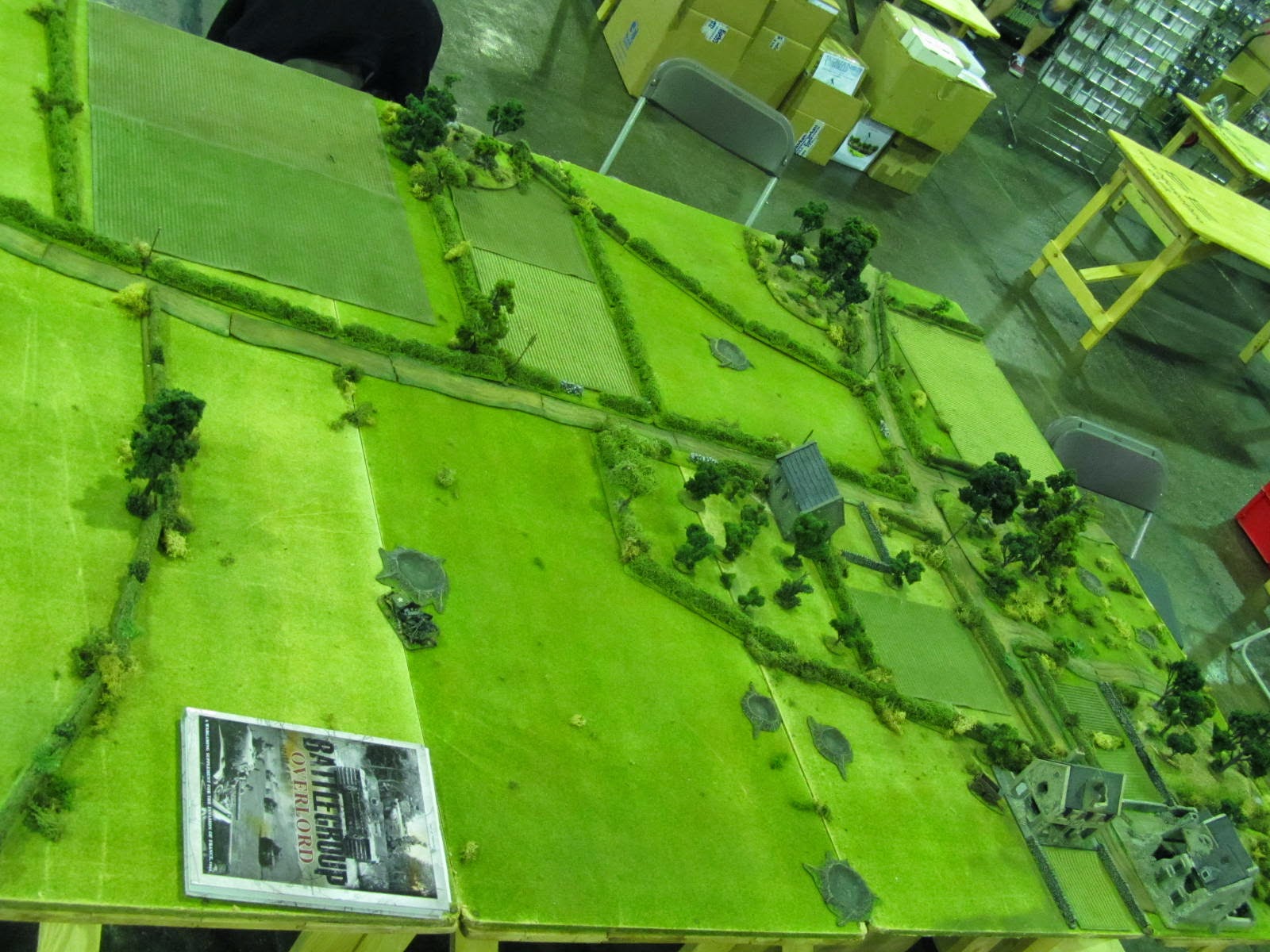 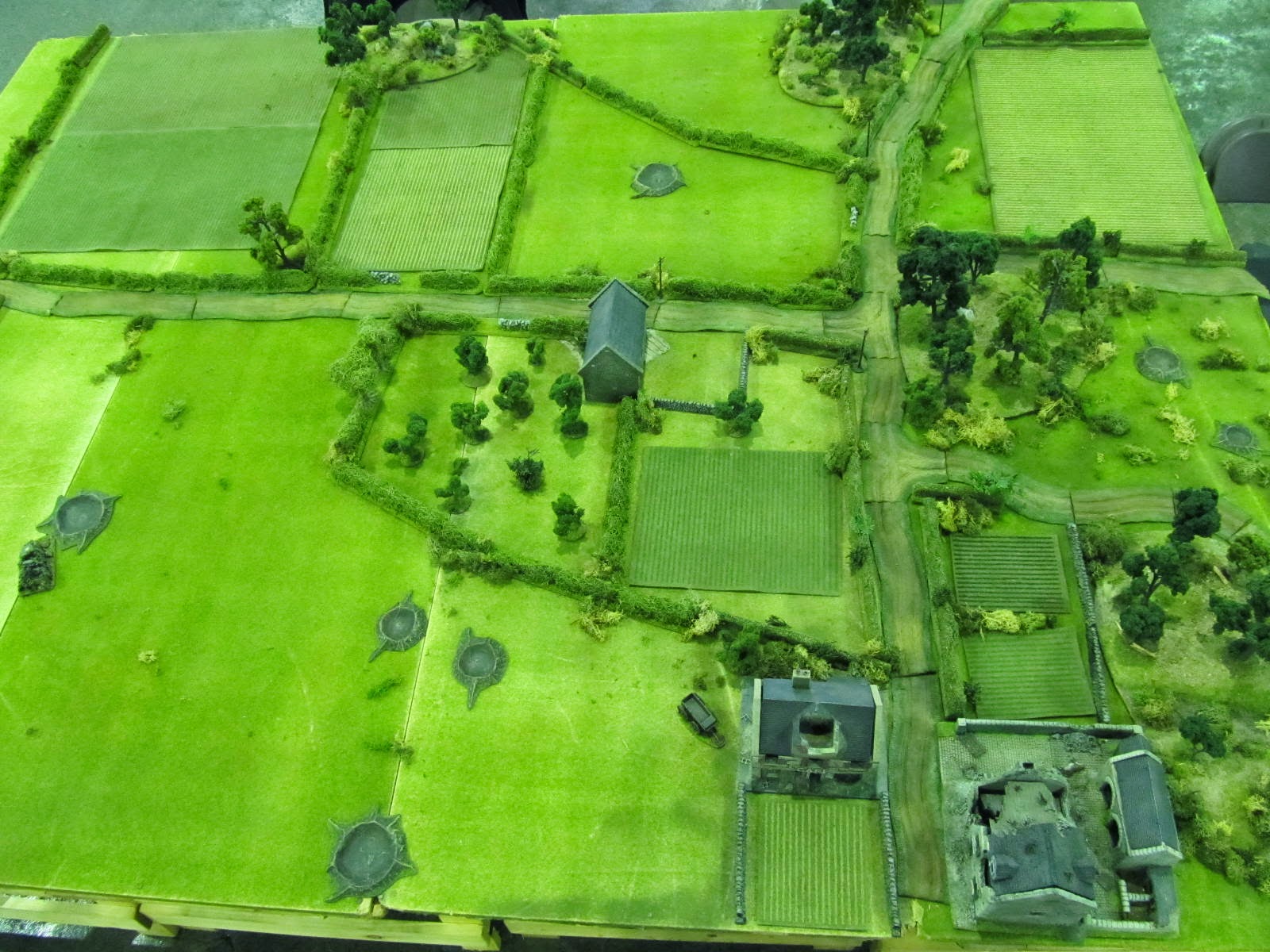 Here are the force lists we used for the game. 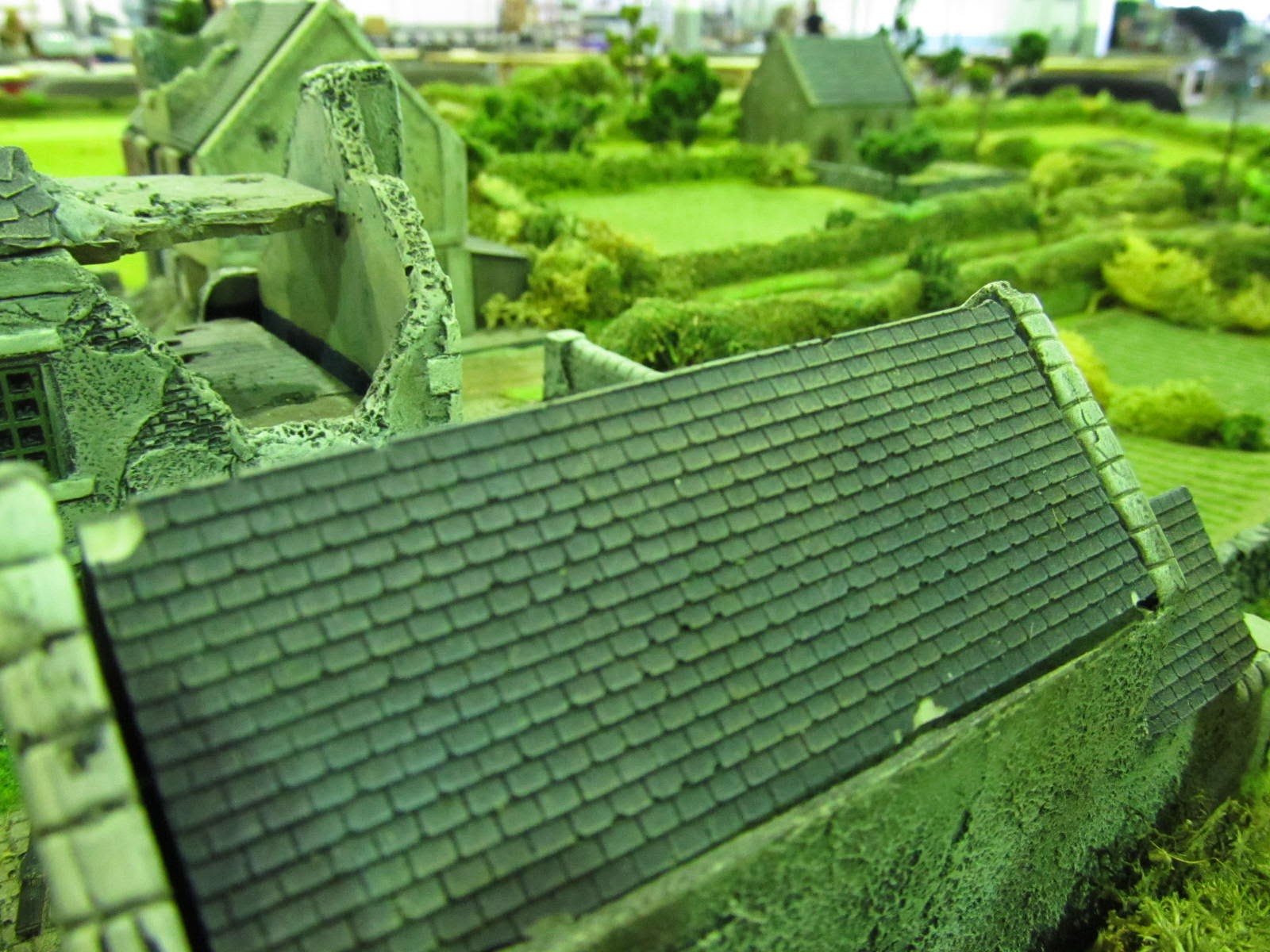 The view from the farm, one of two objectives (the other being the cross roads). 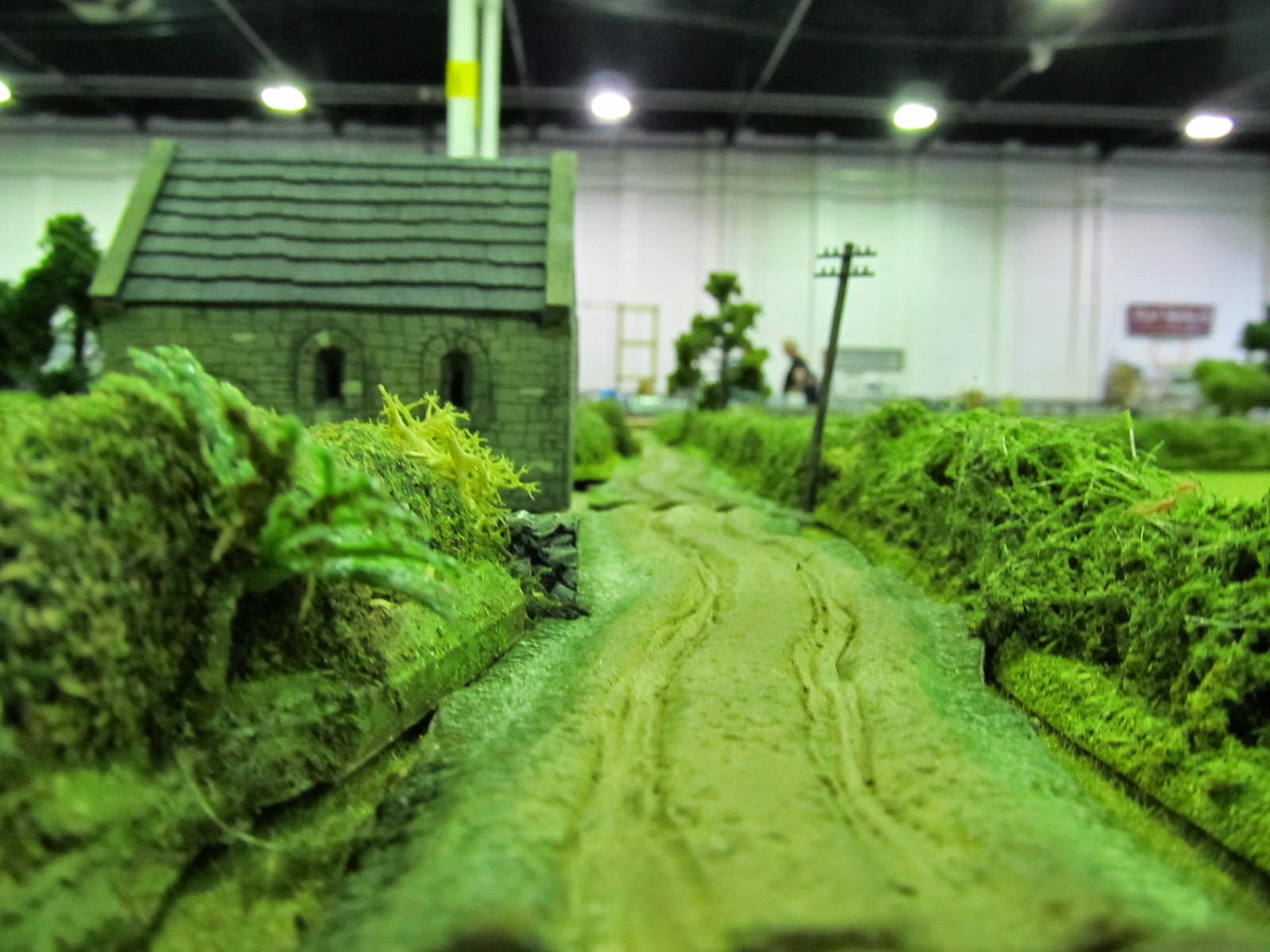 The lane along which the German attack will come.

With the US deployed up to halfway across the table, and a D6 units waiting on ambush fire (we rolled a 1, and used it on the Wolverine covering up the lane from the Chapel), the Germans then deployed within 10” of their table edge or up to 30” up the road.

The Germans took first turn and opened up with their artillery on the Chapel, but failed their comms test. Note, neither side has any comms vehicles, which made the off-table support dicey all game.

The ambushing M10 opened fire at the lead Panther, using 2 HE shells for area fire to try and pin it (experience tells that the 76mm gun ain’t gonna do much vs the front armour of the Panther). It was part of our defensive plan to use HE to pin the big tanks (when facing the front), but then the M10s were equipped only with 2 HE shells each, so the plan sort of fell down due to a logistics foul-up.

The lead Panther platoon broke right (left for us) into the open ground. The grenadiers rushed up the road, all still in their half tracks, whilst the other Panthers fought their way through the bocage hedgerow on their left (all hedges were bocage). 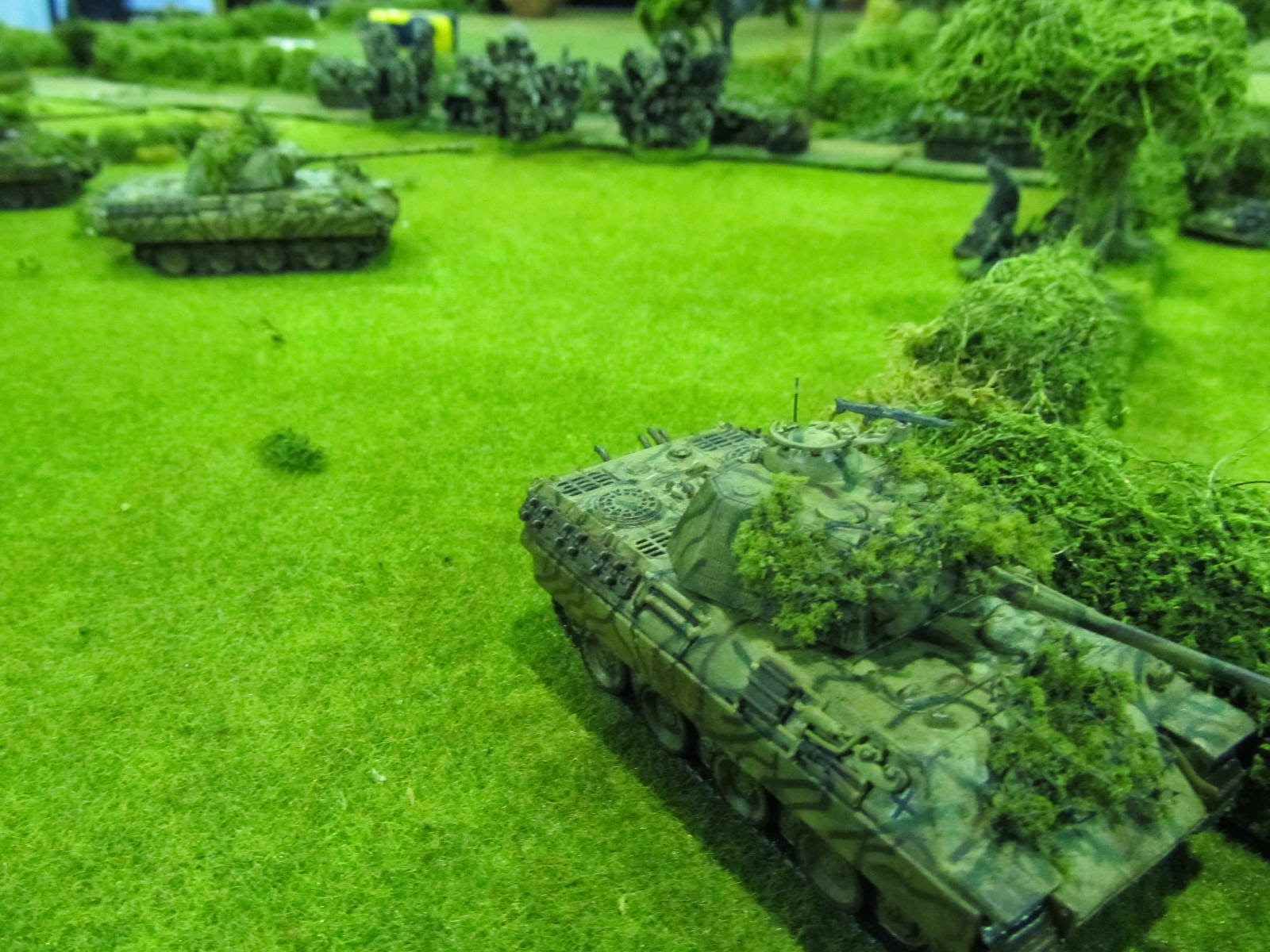 Panther moving left, behind the arty hits the road and the panzer grenadiers. 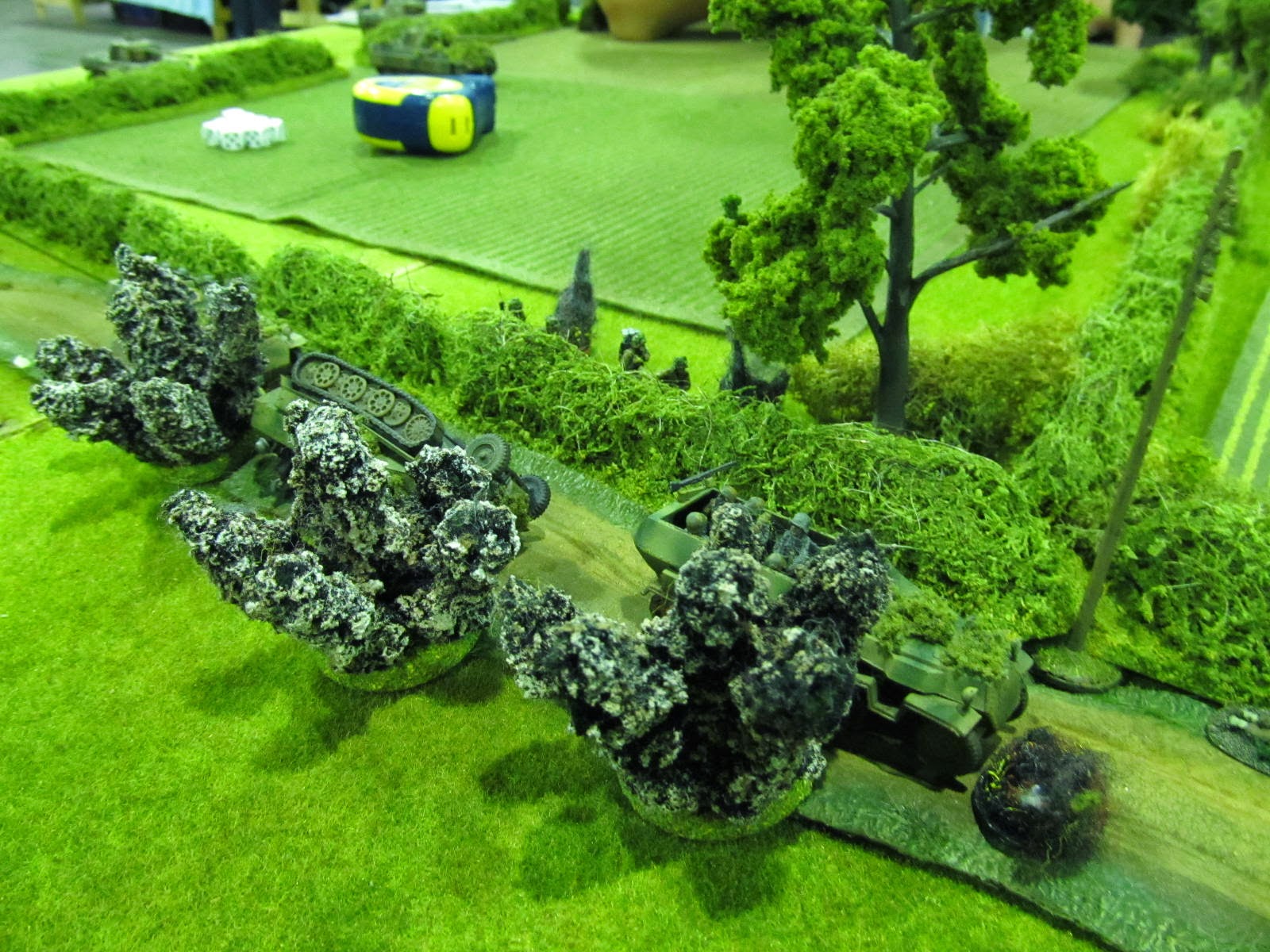 105s bracket the lane and the grenadiers dive for cover in the hedges.

The US replied by mostly going onto ambush fire, awaiting targets. Our first 105 barrage deviated wildly, missing the Panthers but hitting the lane, resulting in a destroyed 251, dead grenadiers and lots of pinning, a bad start for the German infantry (already thin on the ground).

For the first turns we traded arty and mortar fire, with one lucky 80mm mortar bombs destroying the M10 at the Chapel with a direct hit. The Marder, covering on our far left (OK for the rest of this I’ll assume a US POV for flanks etc) opened up at very long range, and hit, glancing off another M10. The two SP guns traded shells to little effect until the Marder need a re-supply and pulled back. Then a Panther spotted the M10 and turned into swiss-cheese anyway. The Germans debussed the grenadiers in the centre and withdrew all the surviving half tracks out of harm’s way. It had a been difficult start for them, and we were still waiting with all our firepower in the hedges on ambush fire. 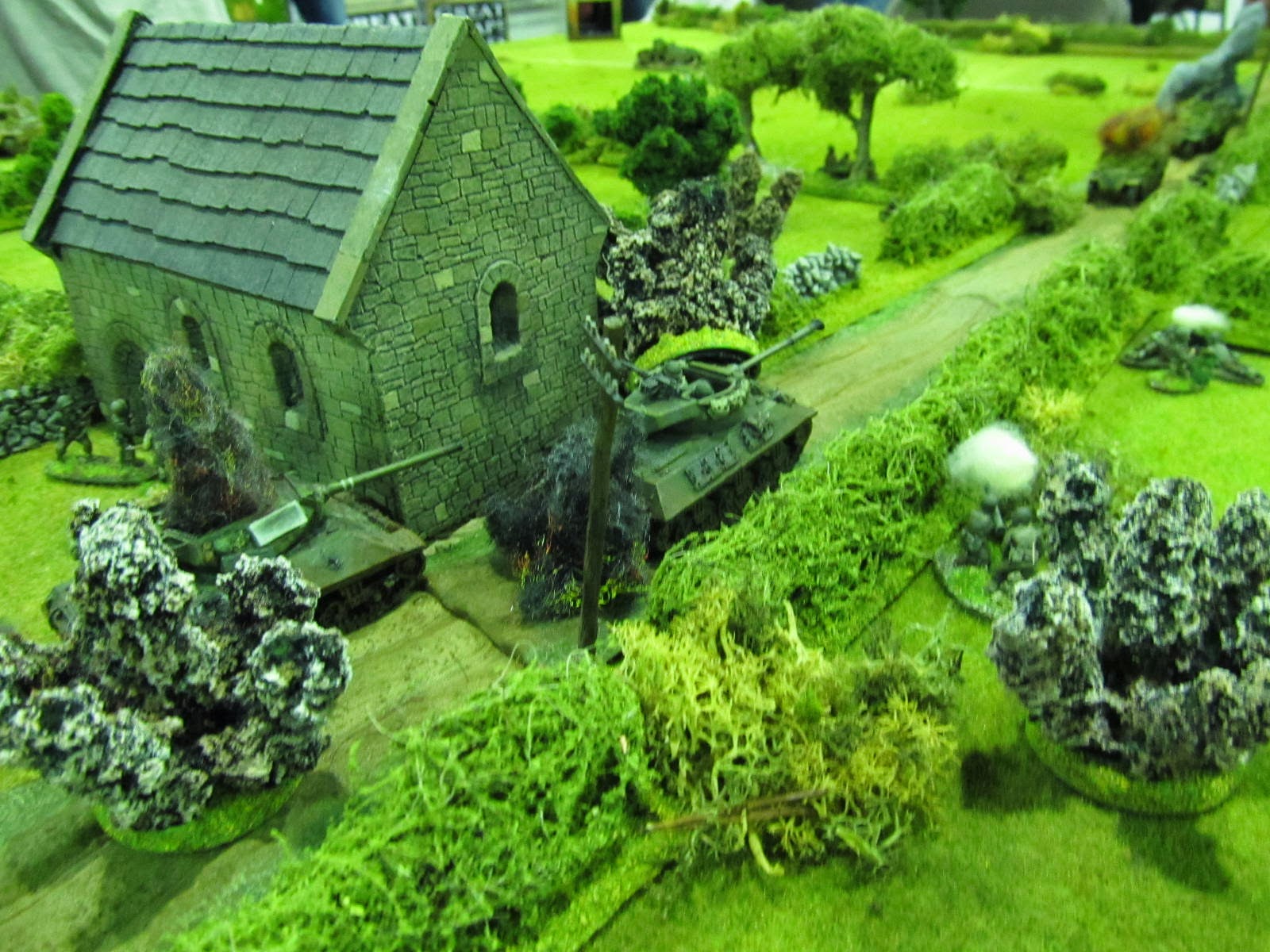 150mm shells and mortar rounds pound the Chapel, 1 M10 is knocked out.

On the left, the 3 Panthers got rolling, MGs hosing down our infantry, one tank survived a bazooka hit and then cut down the team with MG fire. Another survived 2 M10 AP hits, and its return fire was accurate, tearing another M10 into scrap (3 down now, to no Panthers knocked out!). The three Panthers on the left, now in position to dish out the damage.

On turn 4 our Shermans arrived and roared onto the table. Should they go left, were the flank was collapsing fast, go right and meet the other three Panthers about to hit there, or split up. We decided we had to split, but then for the next 3 turns our command rolls deserted us. A 6, a 5 and 4 (on 3D6 with a re-roll each turn!), meant we were struggling to get the Shermans into the game, as we needed to keep up the arty and mortar fire. One 105mm shell finally disabled our first Panther on the left, hurrah! 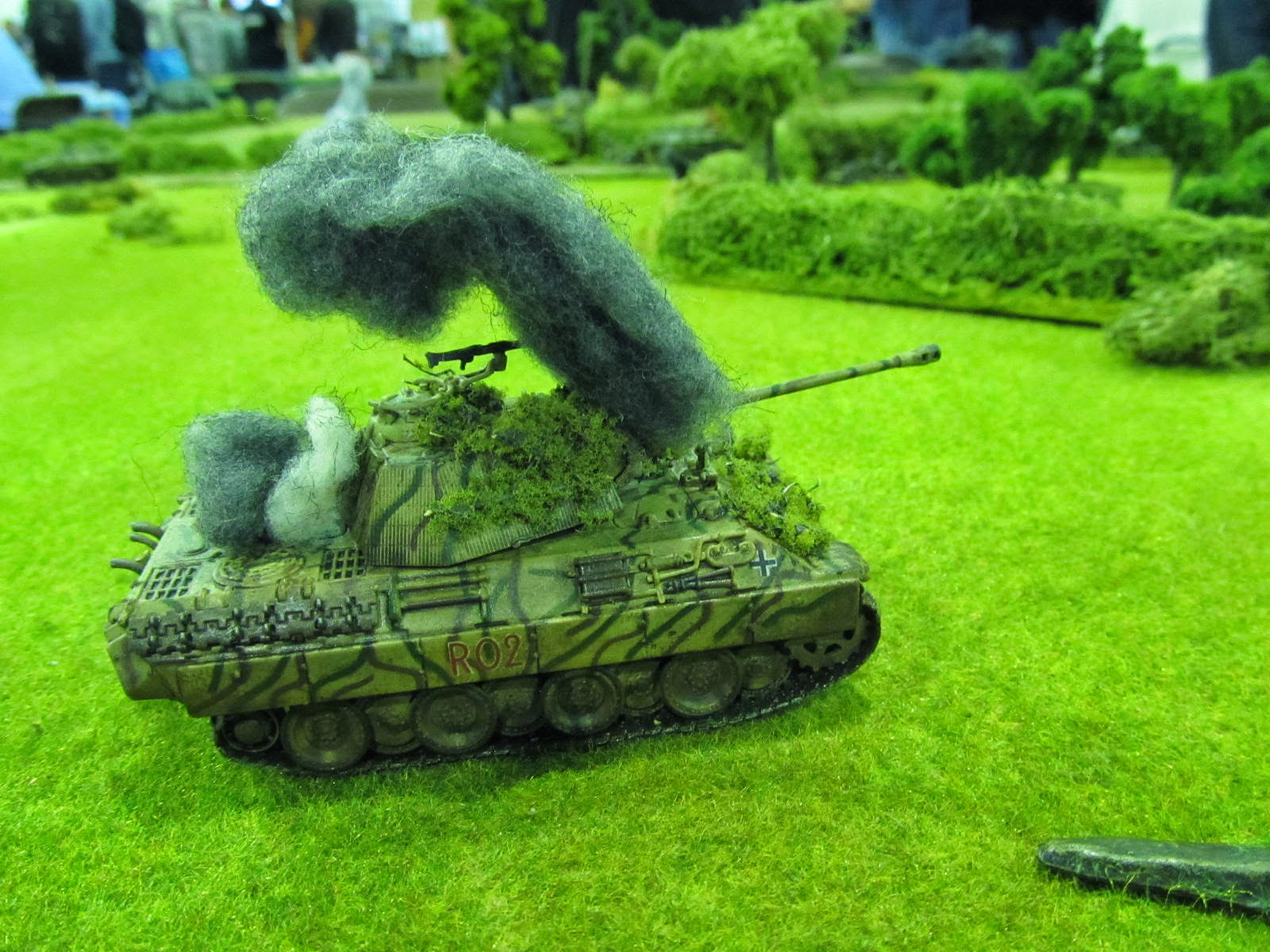 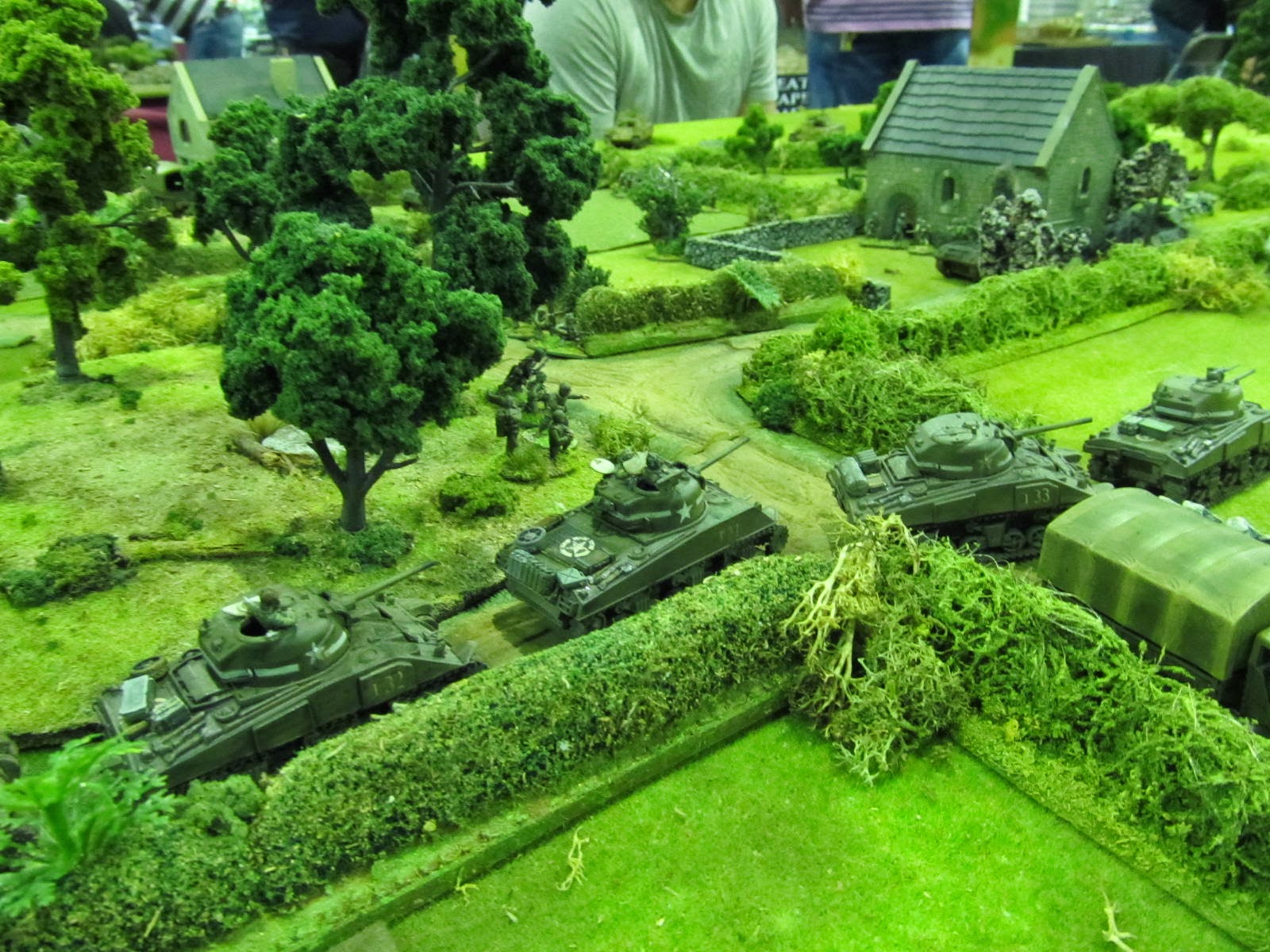 The Shermans arrive. Not inspiring much hope though. 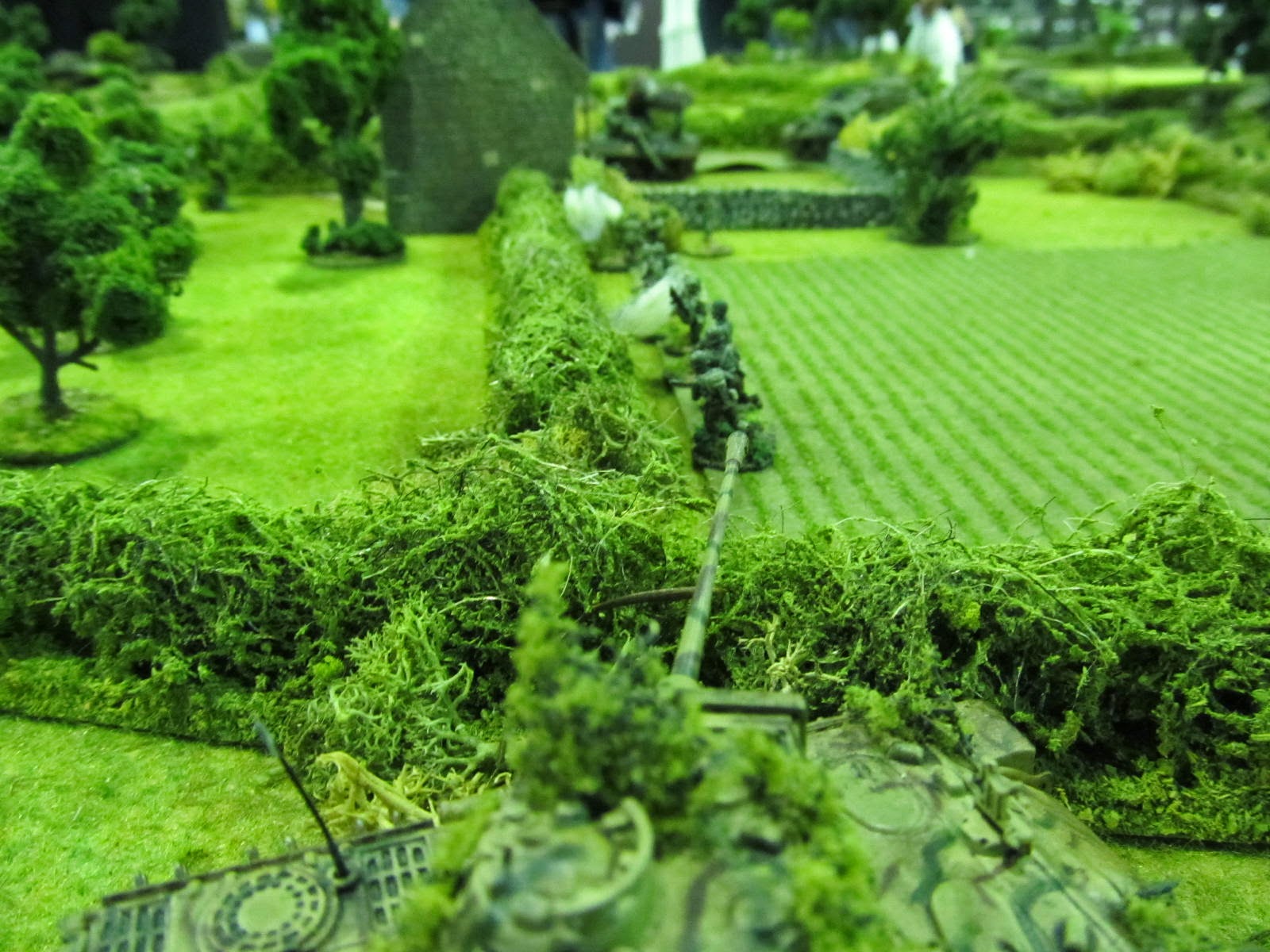 Outflanked, the tank's MG rakes the infantry with fire through the orchard hedge.  An M10's side shot ended the tank's battle.

On the right, the Panthers struck, grenadiers in the hedges opening up with MG-42s aplenty. Our return ambush fire (mostly area) got most of the grenadiers pinned down though, and the first HE shells from the M10s and 57mm gun also pinned 2 Panthers. The forward line had done well, we thought. Then the Germans took 2 counters to unpin and everything was back in the fight.

Our choice now was to fight it out where we where, but we were out-shot by MG firepower, and they had 3 very good (awesome) anti-tank guns to out 3 rubbish ones (including the 57mm, which was firing HE in hope). It wasn’t a fight we thought we could win, so we decided to fire once and withdraw from that hedge. The Panthers would be slowed in pursuit by the bocage hedge, so we felt we could get away by firing once, pulling back and then cutting loose with our priority request on the Panthers, and go for really big guns. It worked well, we got some more grenadiers pinned down again with .30 cal fire, but the 1st priority request was turned down (what!). Those Panthers would be after us. 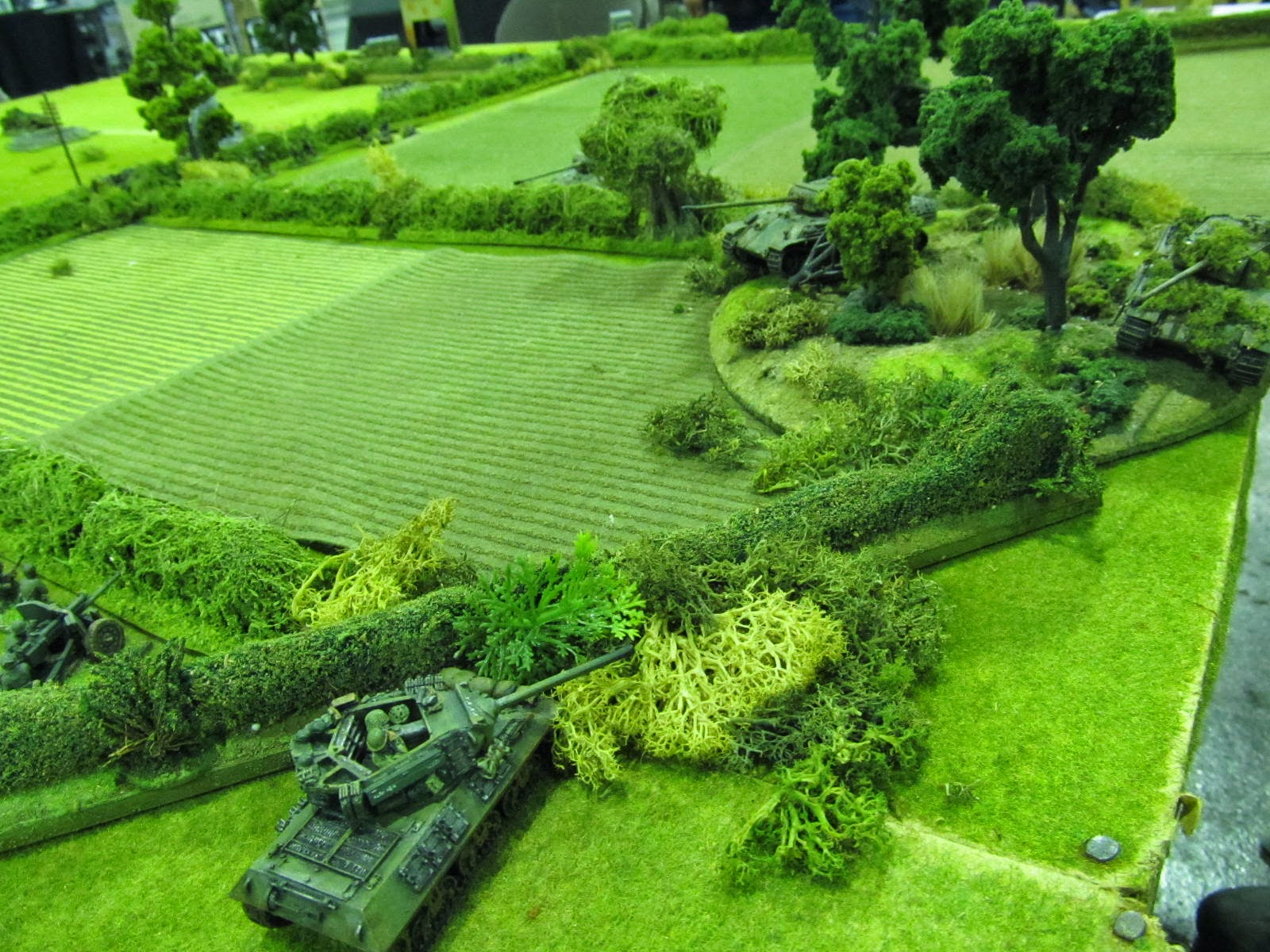 On the right, the Panthers appear through the trees into a hail of HE fire. 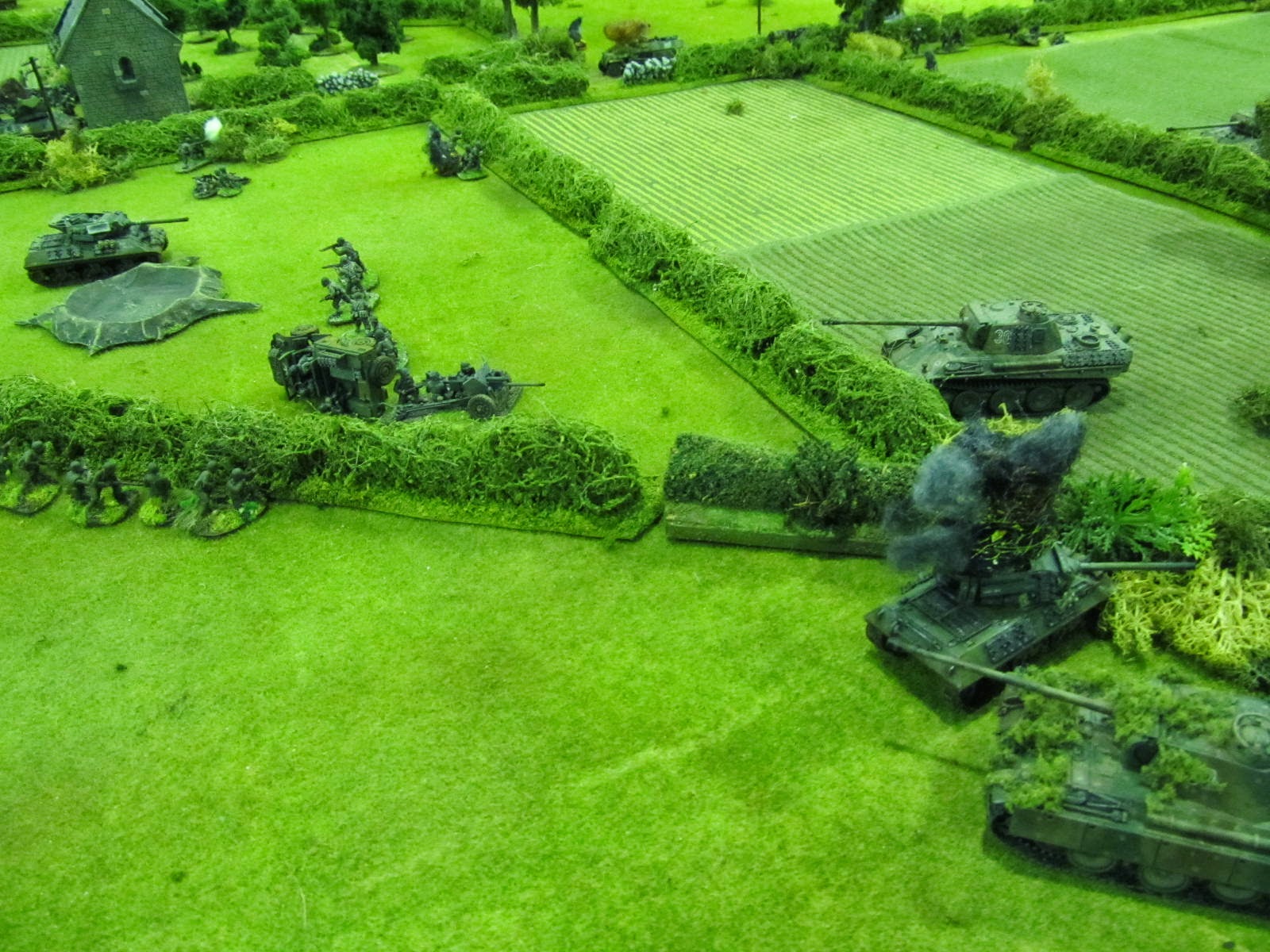 The pell-mell retreat from the forward line, tanks in pursuit 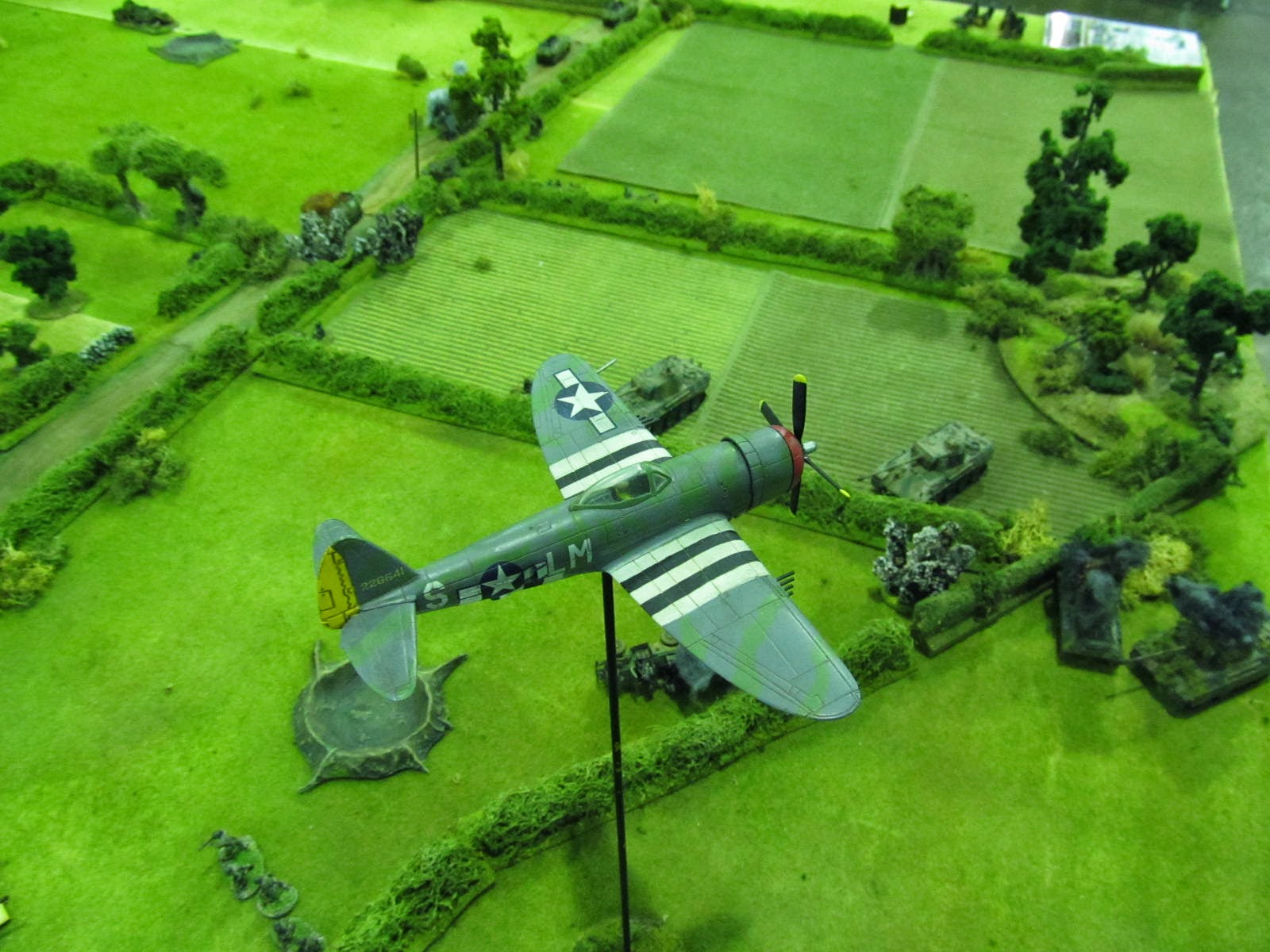 USAAF to the rescue, not quite! Note smoking victim though.

The US streamed back across the big field, MG bullets chasing them. The 57mm gun’s tow was destroyed and the gun abandoned. Both the M10s had one-sided encounters with 75mm high velocity shells that ended their wars. The retreat was something of a rout and very costly in BR.

On the left, the last M10 got a clean side-shot into  Panther and knocked it out, 2 down. But the last Panther finished off the infantry with its MGs, endured a barrage of 60mm mortar shells trying to pin (desperate measures that, but it is all we had), they gunned them down too. A single Sherman moved across to meet it, hoping to get the first shot round the building as the Panther emerged, at point blank range it might work. It didn’t, and its hit glanced off, but the Panther crew missed as well, leaving the two tanks staring at each other about 2” apart. 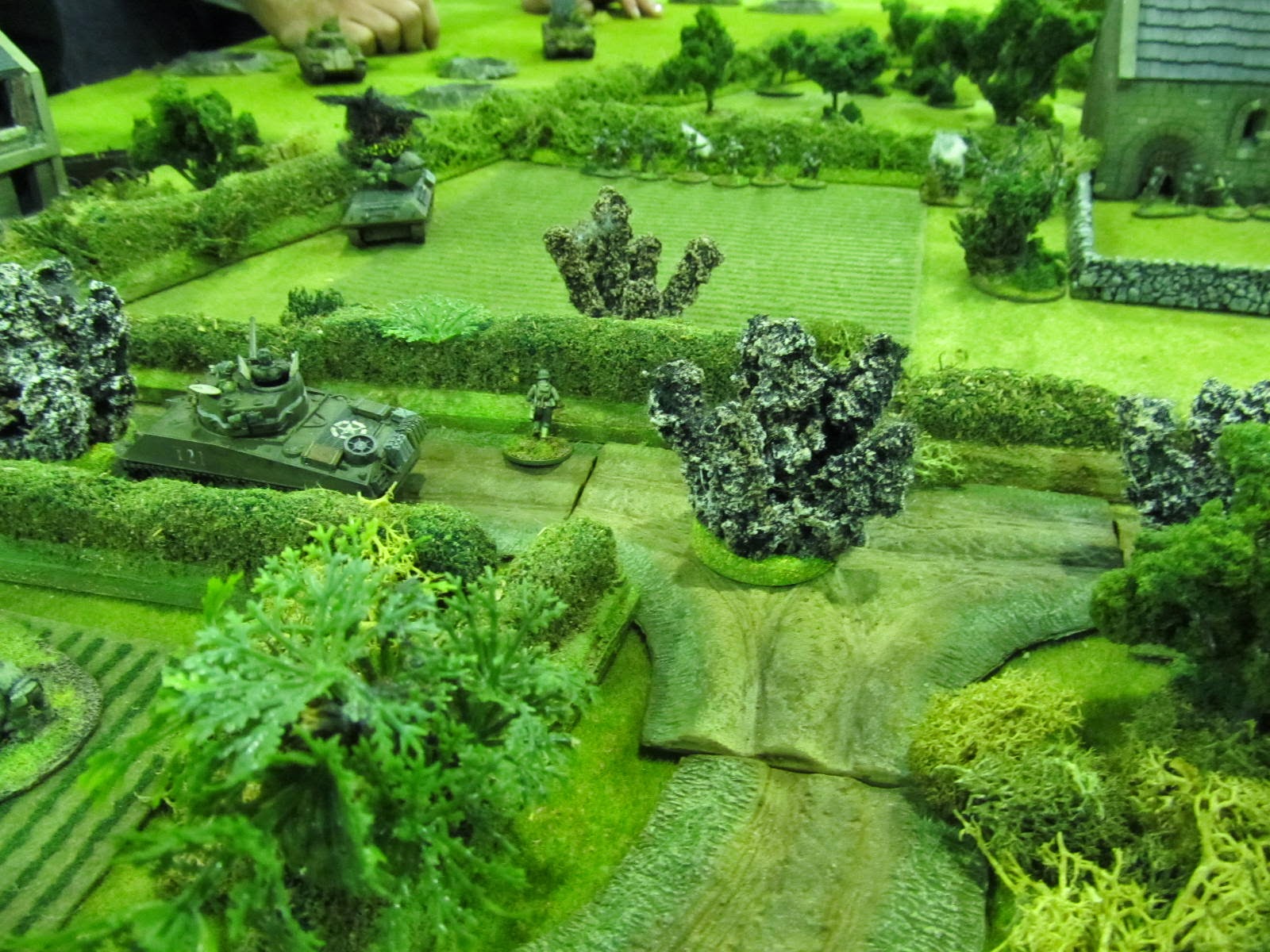 A solo Sherman heading left, through 150mm shell fire, to face off the last Panther. 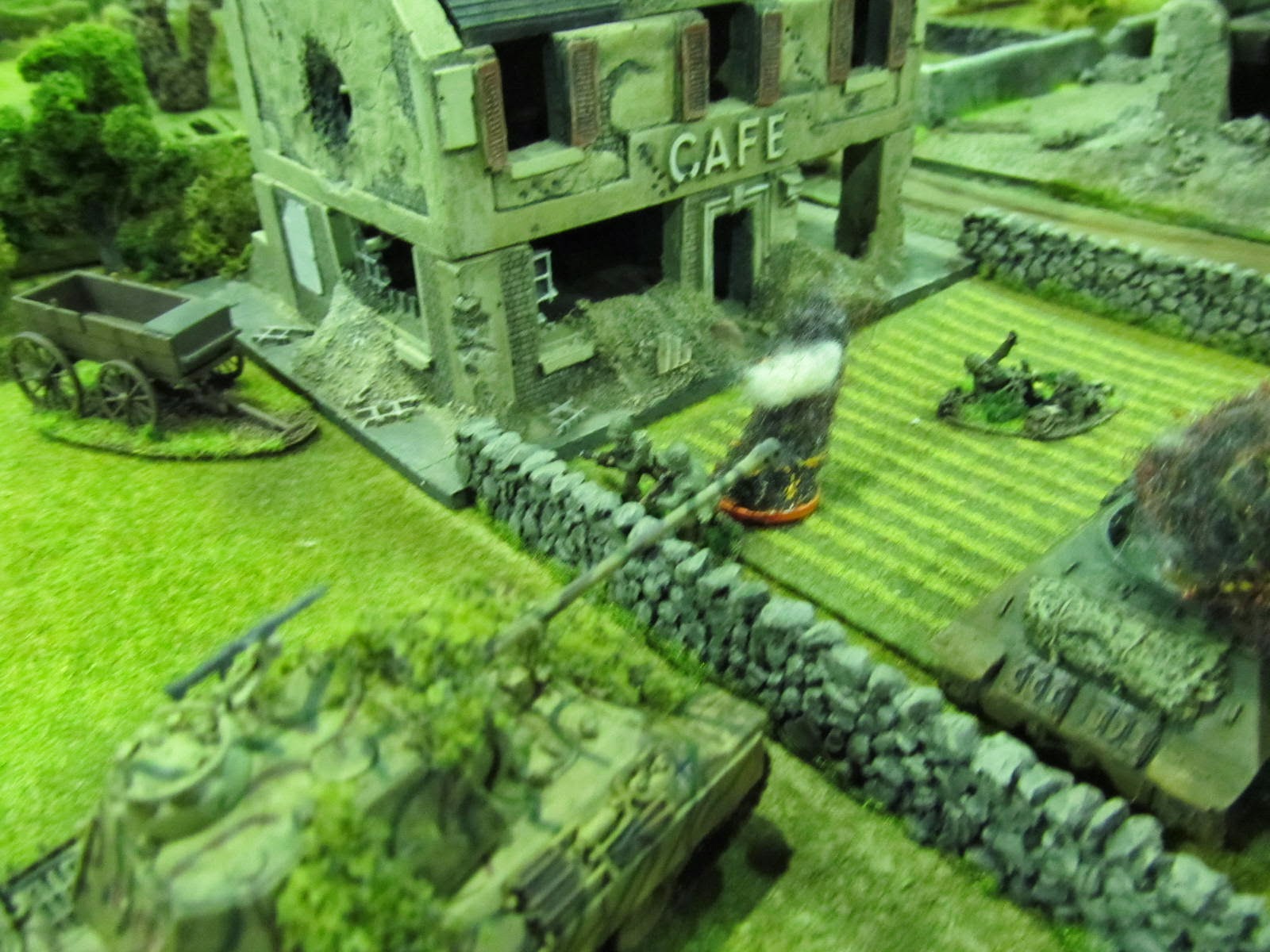 The Panther 'braves' 60mm mortar area fire to clear its path towards the farm. Lurking round the corner is the Sherman. 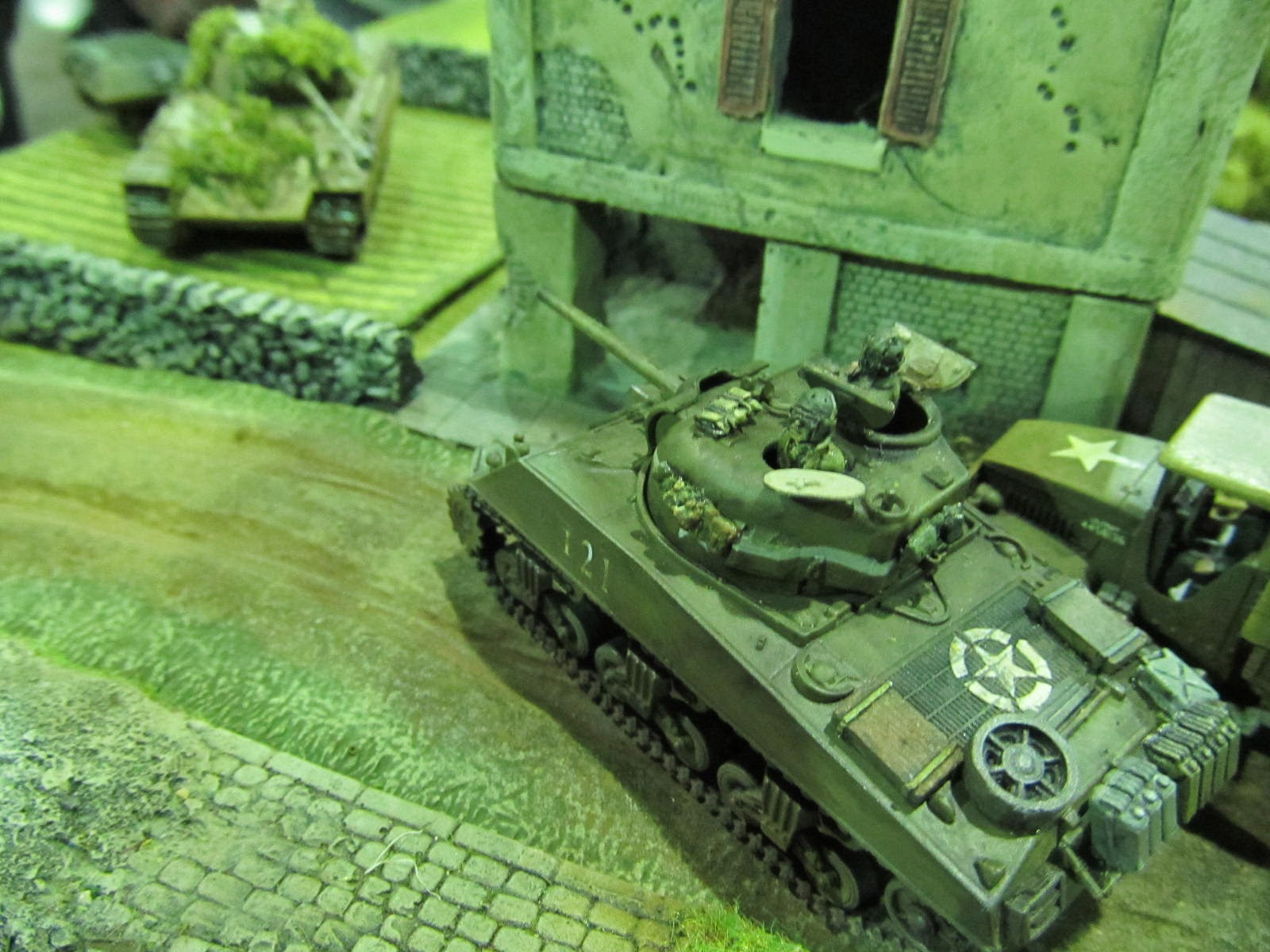 Nose to nose, but neither scored the kill, then the game ended.

The chit pile been building on both sides, and both had about a dozen - it was close. Then we got a aircraft counter and a P-47 swept in, missing the Panthers with all 8 of its rockets (noooo!). Next turn got another air attack chit, and another P-47 arrived (God bless the FAC). It hit a Panther on the right and destroyed it - 3 down from 6. And the chits for air attacks and destruction looked like the Lehr would break. Except that next turn they inflicted 5 chits on the US, destroying a Sherman, an MMG team, our HMG team (who had failed to pin anything all game), our last bazooka team, etc. That was enough, the destruction meant that US had broken, despite still having 2 P-47s over the table, it was just too late to save the day. Narrow win for the Germans (they had 5 BR left).

Great game, to and fro,the big cats were tough but still it could have gone either way.