SOLDIERS OF GOD - THE BATTLE OF KHEREYAB


1138. On the disputed border between the County of Antioch and the Emirate of Homs lies the stream and village of Khereyab. Here, with the army of Raymond Marshal of Antioch on the march, the Emir of Homs drew up his forces to meet the infidel invaders, foreigners` greedy to steal their lands and access to the waters of Khereyab which fed fertile lands downstream.

This would be final big play test for my forthcoming ‘Soldiers of God; rules set – a card-driven game for the Crusades. In game terms it was a large field battle between 300 pts of Crusaders and 300 pts of Saracens. Commanding the Army of Homs, I pre-chose my Battle Plan (in the game, each force has a plan of attack or defence, chosen before picking their forces, which dictates some of the action cards available to the commander each turn). I picked a defensive plan, ‘Hold and Harry’, in which my army’s centre would hold its place and make best use of their missile weapons, whilst the right and left flank would harry the enemy, again with missile weapons, but most effectively with quickly advancing and retiring skirmish units. These flanks were built around mercenary horse archer light cavalry, support by some Ghulam ‘medium’ cavalry behind, should the enemy breakthrough my light missile troops. My centre was massed levy infantry (including some Sudanese mercenaries but all pretty poor stuff), backed by some archers and a single ballista light war engine.

The Marshal of Antioch led his force with a Battle Plan of ‘right echelon attack’. Attacking hard on his right, advancing steadily in the centre and holding on the left. His army had the Knights Templar and mounted men-at-arms on the right to launch the main assault, with their extreme flank held by Turcopole native light cavalry. Men-at-arms, archers and crossbows were in the centre, with more men-at-arms, armed pilgrims (diverted from the road to Jerusalem) and more Turcopoles on the extreme left.

Deployment complete, the more offensively minded Crusaders began their attack, with their right flank quickly running into swarms of advancing light cavalry, all darkening the skies with an arrow storm that saw the mounted men-at-arms routed from the field, a bad start. But the Turcopole’s rash charge did defeat and rout some Arab light cavalry (they had already thought about deserting on the first action card play of the game – so were obviously not to be trusted anyway).

Saracen archery proved deadly, the horse archers racing in to fire, turn and ride away, leaving the heavier crusaders pressing forwards peppered by waves of arrows. Disorder built in the ranks. On my right, the horse archers held on the stream banks and launched volleys into the village of Khereyab, now occupied by enemy men-at-arms and pilgrims, but these troops had no way of replying and just took the best cover they could. Happy with that, I left the skirmishing light cavalry to just harass the village all game, keeping those unit’s heads down.

In the centre the Crusaders pressed forwards, only targeted by the occasional ballista bolt, until a free horse archer unit circled around from their right flank and freely galloped around the rear to threaten the Crusader’s baggage train. Men-at-arm were forced to halt and wheel about to face the horse archers, weakening their attack. To add to their woes, another unit of horse archers attempted a flank march and passed the test (I needed a 6 and got it) to arrive on the enemy board edge. Suddenly, the Crusader’s centre looked surrounded, horse archers attacking from left, right and centre. Tactical it looked grim.

The only chance was to press the right flank attack rapidly, launching the Knights Templars into a furious charge, which final caught up with the retiring horse archers, but their final charge lacked impact, and my light cavalry managed to hold out. They would fight a cautious, attritional melee to hold the heavy knights. They slowly lost the fight to the best troops of the age, but it bought valuable time for the rest of my forces to finish the surrounded and beleaguered centre.

With no decisive victory of the right, the Crusaders centre could not hold out. Arrows from front and rear peppered them, a Ghulam unit charged and smashed the peasant archers, winning the melee in a ‘gory massacre’ (big wins mean a gory massacre has occurred and extra army morale is lost for the heavy and gruesome losses). Then the men-at-arms also broke and routed, taking arrows from front and rear, and leaving the baggage train exposed to the horse archers, who gleefully fell up it to loot it. The sudden massive morale loss for the collapse of the centre saw the Crusader’s defeated and withdrawing to save themselves.

Antioch’s invading army had been crushed. It starting Morale value had been 23, it now stood at -6. The Saracens had been 25, it was still 15. A major victory for the Saracens (and a big win for me, hurrah!).

The SoG rules are now complete, this test threw up nothing that worried either player. It was fast, furious, unpredictable and great fun. My battle plan had worked well, the light cavalry had harassed the life from the enemy, turn after turn. The Crusader’s attack had been a shambles, every unit was going home looking like hedgehogs. It had been 4 hours of furious play, with a 30 minute break for a bacon-butty lunch.

Now to finish the production work in the next couple of weeks. Look out for more details about SoG in the near future. Very happy with game rules, and I can see it being turned to other ‘ancients’ periods in the future - maybe ‘Soldiers of Rome’, ‘Soldiers of Persia’ or even a fantasy battles version (a bit ahead of myself, but just getting enthusiastic).

Here are a few snaps. My camera batteries died after deployment and, keen to get on and play, I couldn’t be bothered to find new ones. So these will have to do this time. The battlefiled before the armies arrive. Saracens on the left, Crusaders on the right. 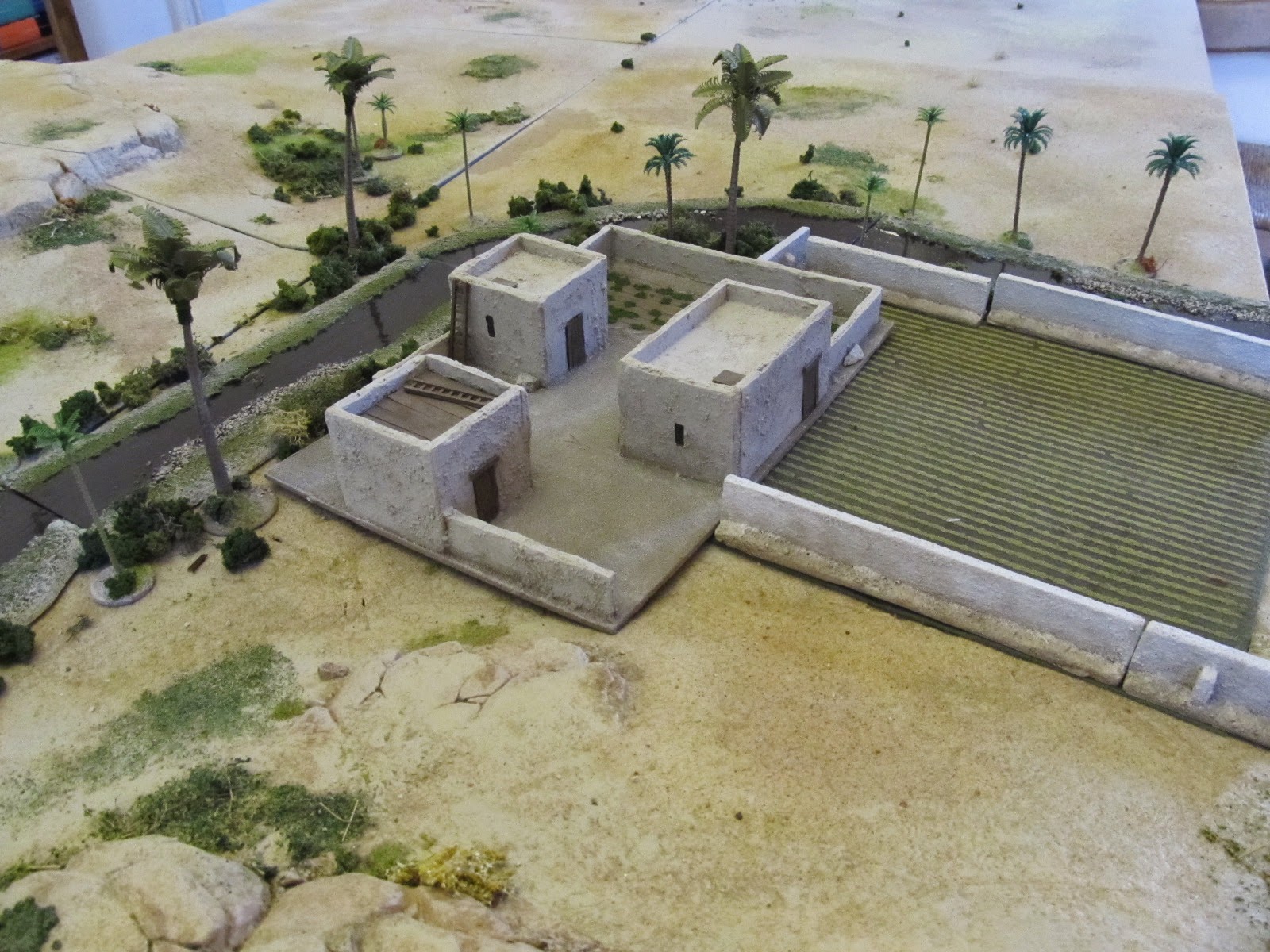 The village and fields of Khereyab. Soon to be occupied by infidel invaders, pinned down under endless arrows from across the stream. 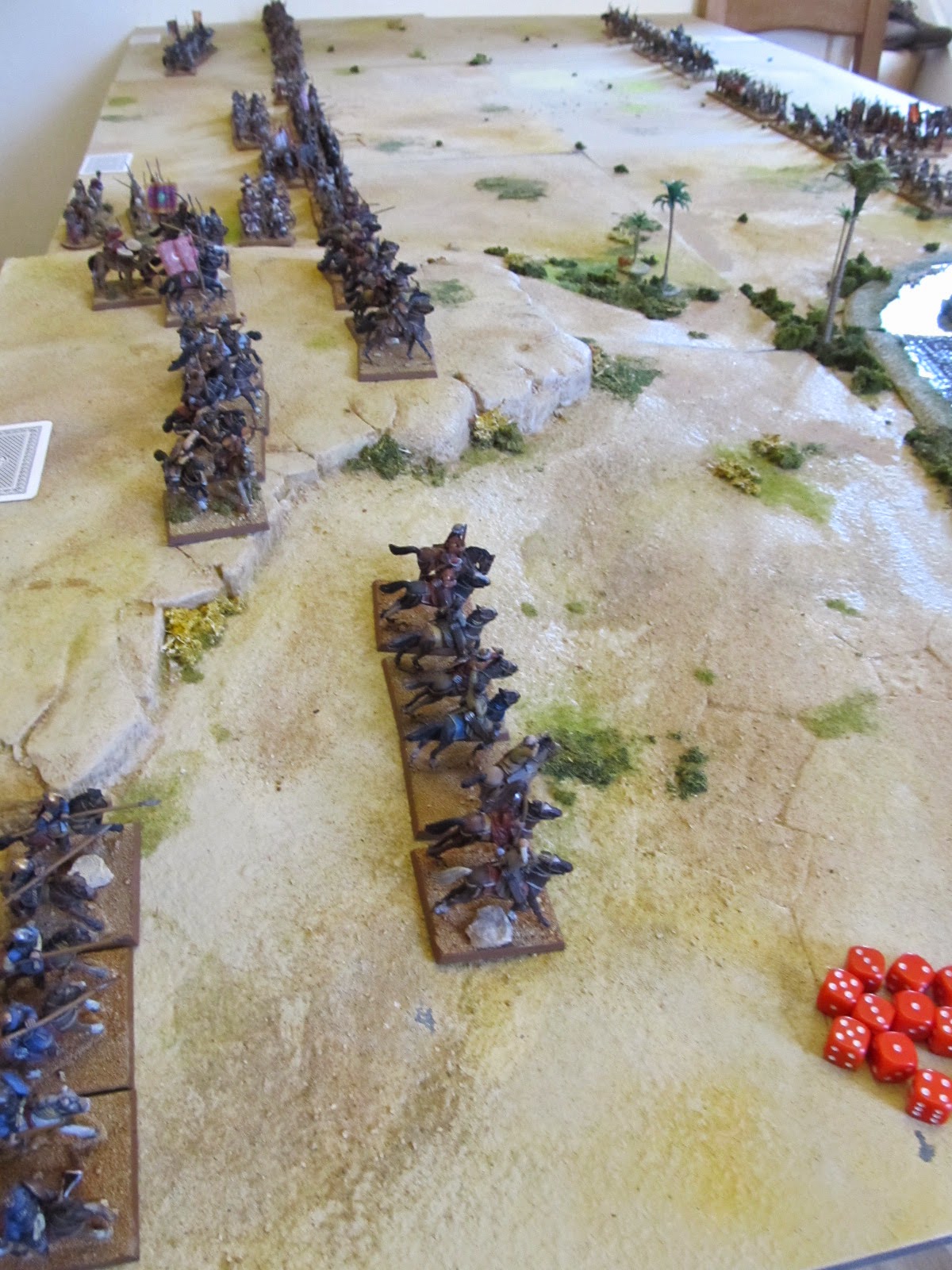 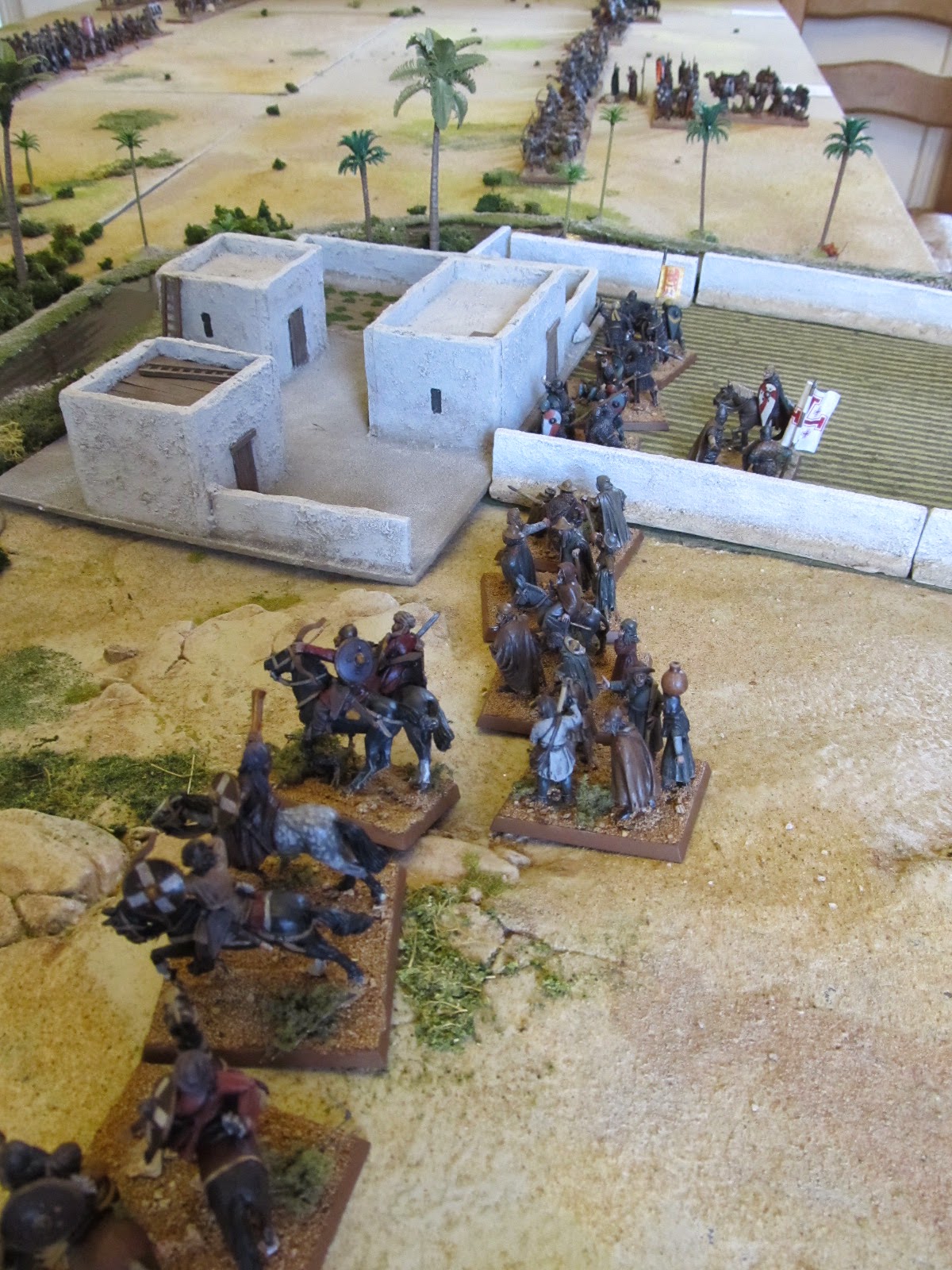 The Crusaders opposite, with their own Turcopoles. 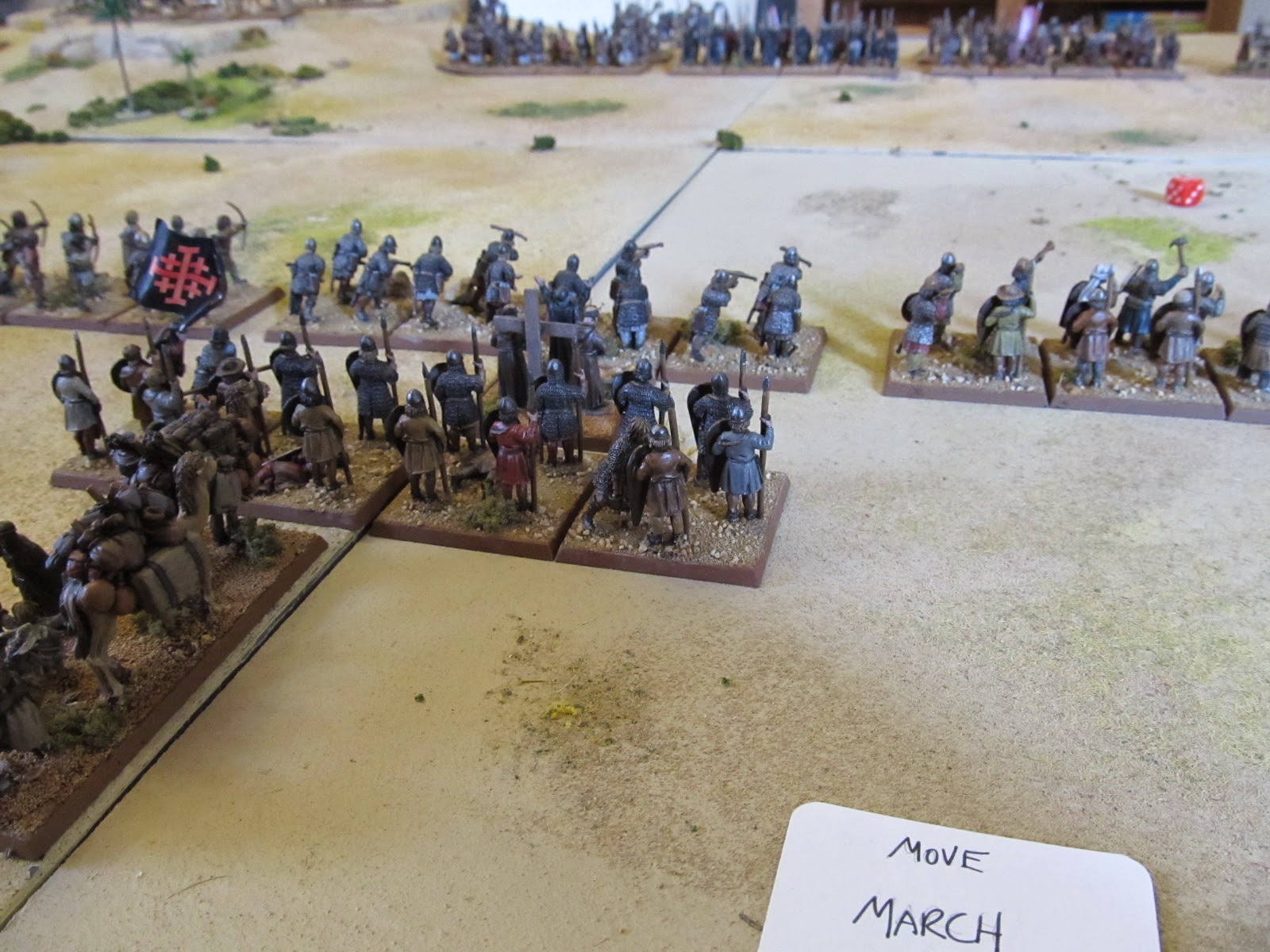 Crusader's infantry centre (and baggage train camels).Most would be dead or routed by the end of the battle. The baggage looted. 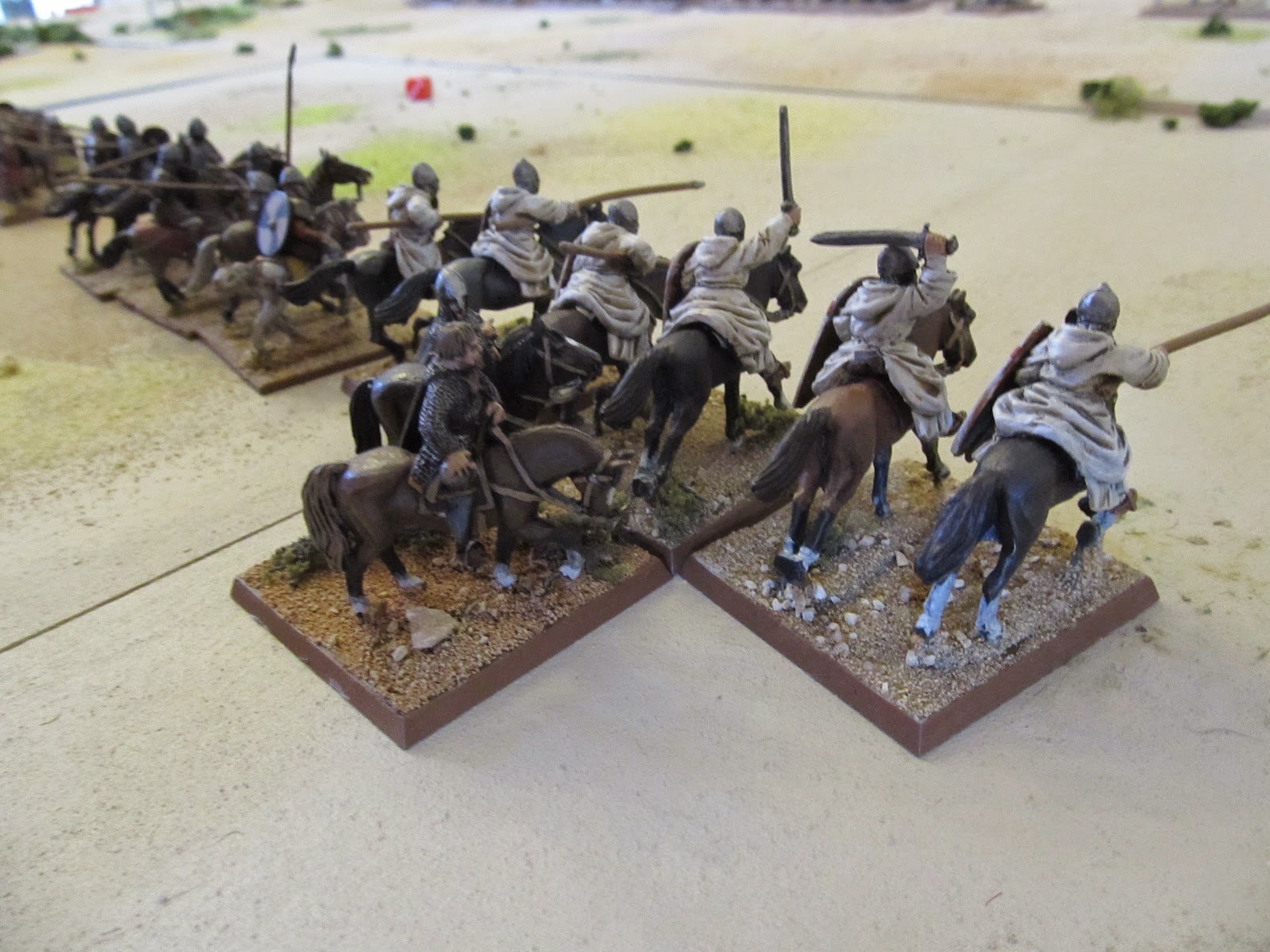 Point of the attack - the Knights Templar and mounted men-at-arms (they ain't Knights). The Saracen hordes would prove too numerous even for these vaunted warriors. The command stand (supporting the Templars) was killed by a stray horse archer's arrow in the face early on - another turn of bad luck for the Christains.
Posted by Warwick at 13:31