With the roar of Maybach engines out of the woods came the German panzers, Tigers in the centre, and first HE ambush fire shots flew across the corn fields from the waiting Russian gunners, to little initial effect. The crack of 88s could be heard as the Tigers and Ferdinand opened up, scoring no hits - yet. The Russian turn one response was to unleash their 152mm heavies from off-table onto the PRTP in the centre on the edge of the woods, scoring some pins, and following that up with the 3 tube 82mm mortar battery. These batteries would fire on those PRTPs for just about every turn of the game, sometimes using harassing fire, but they kept it up for turn after turn, no comms tests required. That was part of the plan.

We had few tanks so far, so very little to move. Rifle squads ran to the their firing steps and took up their ambush fire orders. The AA gun crew did likewise. Much of our AT defences did the same, to see if the Germans would come closer… meanwhile the SU-76s battery started their engines and went onto reserve move, ready to race to where they might be needed. For now they stayed out of sight on the back of the ridge. Their supply wagon was the victim of a rather mean Nazi move, getting a German breakdown chit played on it. Of all the things to play it on, it was poor peasant and his wagon. The axel broke under the weight of 76.2mm ammunition loaded up, and it was immobilised. The Sukas would now have to come to him to re-arm.

With the German second wave not due until turn 3, the panzers could get moving again. They rolled forwards, seeking targets. In came the HE shells, pinning a Tiger and a Pz IV. A fusillade of 45mm shells failed to pin the Elephant… oh I so wanted the little guns to score a pin. The dug-in T-34 opened fire as well, pinning another panzer IV with HE fire (he’d fire ever turn for 5 turns then be ammo-less for the rest of the game - no resupply truck - T-34s are not supposed to last that long).

The German mortar spotters went for their first salvo, only to fluff all their comms-tests. No funker was available either for re-rolls, even the wire team rolled a 1. No support fire yet (obviously still setting up somewhere). The Elephant scored its first kill, HE hitting a 45mm gun and annihilating it as it barricade caved in as well. Yeah, no answer to that really!

As the panzers rolled up and fired, a Tiger’s 88 shell glance off my dug-in T-34 - a small miracle. We did draw an aircraft chit and rolled a 6! Yes, incoming VVS. It was a PE-2 fully loaded with 8 bombs. The Germans AA defence hadn’t arrived yet either.

The Luftwaffe’s contribution of a timed Stuka air strike encountered our waiting 37mm cannon and was pinned, hurrah, it banked away to safety without unloading on us. A panzer III strayed too close to minefield marker (claims it was unseen in the cornfield were laughed off). Boom - first dead panzer burning in the crops. They be more wary in future and studiously avoid the minefield markers for the rest of the game.

The initial turns had gone OK, a few infantry losses to MGs in the woods, nothing major though, we hadn’t killed much either but had pinned a fair bit, they were deep in the chit pot to take 2 chits to get fully unpinned for their next turn, which is a result.

Our turn 2, and the artillery hammered away and a direct hit on a Panzer IV saw it go up in flames too. Another was pinned. The mortars did, well zippo really. More 45mm and 76mm HE shells flew, and we pinned the Tiger again, it was taking a punishing beating - but they are built for that. Our speeding PE-2 swooped in low and ‘bombs away’, adding to pinning of the panzers (no direct hits though - boo!). It would be back to strafe next turn.

Turn 3 and the entire German force arrived in the second wave. Half-track mounted grenadiers moving up into the woods behind the panzers. Resupply trucks, 20mm AA (on a heavy car), senior officer and the 3 StuGs all carrying tank riders. They would move up and attack Teploye on our left, facing down the 45mm guns (who got 1 of them - yes). It was a lot of stuff, we needed our tanks! Not until turn 5 - eek. So, worried about Teploye we raced the Suka’s up to help with more HE fire over the village roofs from the ridge. That brought return fire from the Elephant, its first big shells whistling too close for comfort! Their Borgward rubble forwards from the wood line, heading for the minefield in front of our trenches. We held our fire incase of a swift infantry assault and ignored it for now. The Germans also pulled an aircraft chit and they had a Luftwaffe spotter on the table. The Luftwaffe returned, this time with a Stuka G, 37mm-armed tank buster. Heck!  The air was busy overhead. We’d put our AA cannon on ambush fire again then.

On turn 3 we fought as best we could from our positions, no movement at all. HE shelling, another Panzer III hit by a 152mm howitzer shell and destroyed. More pinning with HE at long range as the four Zis 3 guns crashed and boomed.

On the German’s turn they launched an infantry attack, their armoured panzer grenadiers racing forwards and disembarking, our waiting ambushing MG dug-out liberally sprayed them with bullets and pinned down a squad and an MG team, then rifle fire saw another squad fall back rather than be wiped out. That attack quickly stalled. Claims the MG dug-out, hidden under a bush hadn’t been seen were again laughed off. The Stuka came in strafing and destroyed another 45mm gun in a blaze of 37mm cannon fire, only one gun left now,  their objective was in peril as tank riders disembarked into the cornfields and StuGs hammered away. The Elephant scored its second kill, smashing a distant Suka into a zillion bits with a long range hit… ouch!  In the centre, the unpinned Tiger still engaged the dug-in T-34 but missed this time. We were beginning to be whittled down, but they had a lot of pins again and their first infantry assault had been halted. Again, their comms test failed and their mortars didn’t fire (signals unit!). Desperate for some IDF from off-table the German FHQ asked for a 1st priority request for his divisional artillery, and rolled a 1 - no guns available Herr Oberst! We did luckily draw another aircraft counter that turn (but the VVS control officer was still not on the table though), and rolled - a 5! Yes, another aircraft, this time a bomb-armed IL-16. We’d run out of flight stands, time to take turns using it… 4 aircraft overhead now… PO-2, PE-2, IL-16 and Ju-87G, crickey! Worried about the Borgward we took along range HE shot, hit and immobilised it (double 1). It sat in the field, going nowhere, much to the German players disapproval ‘we only wanted to destroy a minefield!’. Yeah right!

Finally, it was our turn for some reserves, rolling a 7 on 2D6, the T-70s all pulled up on the board edge on our far right, ready to lead the charge. They set off at 20”, flat-out, using Stal! Stal! Stal!, right over the trench, heading for the Panzer IIIs. The race was on. How many would make it into close range? Not many was my guess, but the Germans had already fired a fair bit of tank ammo, and with APs shots sure to follow, they be low(ish) by the time the T-34s got here (due over the next 2 turns). In the air war, our Peggy circled round for a strafing run but was hit by 20mm flak fire, pinned and damaged. The Sturmovik bombed the StuGs near Teploye and hit one, blowing it sky high… the Germans were feeling short of AA defence. The PO-2 called in off-table heavy mortar fire, missing wildly but still pinning both German  mortar teams deploying on the back board edge - actual counter-battery fire.

On the edge of Teploye, the last 45m gun was now gone, hit by StuG HE fire the crew ran for their lives. With grenadiers moving around the minefield and over the barbed wire that objective was later claimed by the Germans. They also had their first grenadiers into the barn on the edge of Teploye, but they were soon pinned by waiting small arms fire from our occupied buildings. They claimed the church objective, just being within 5”. We’d want to take that back.

Here ends part 1 of the AAR, next time, the counter-attack gets under way in earnest, and more aircraft arrive (all 5 chits came out in this game, and all 5 rolls were passed). At this point, 5 turns in, we’d had the edge in counters taken, but they had a higher starting point (due to our defences, inexperienced infantry and off-table artillery), so I figured it was pretty even. The tank-charge would decide it… next time… 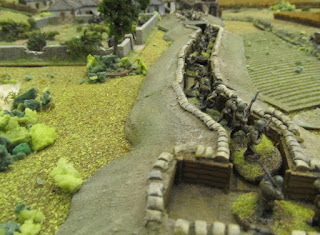 ' Man the trenches', in the centre, the thin brown/green/grey sludgey line. 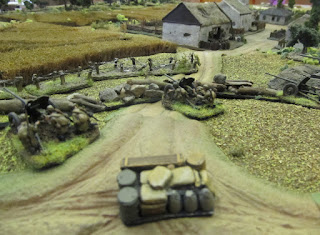 Ighev's Fortress, 3 45mm guns behind barricades, wire and a minefield.
Supply dump is an objective marker. 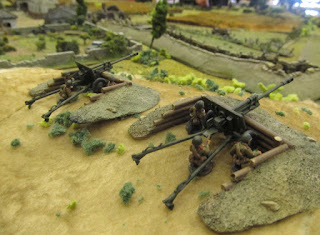 Crash-booms on the ridge, in gun-pits, 3+ cover - a must really. 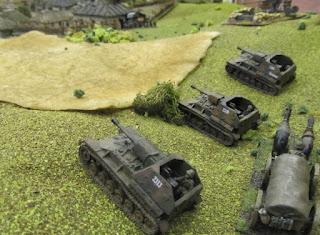 Mobile reserve of SU-76s and their supply wagon, on-call above the village. 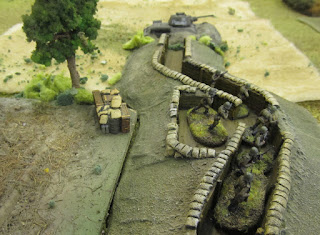 Far right (I think that should be the Germans). Trench line, dug-in T-34 and objective marker. 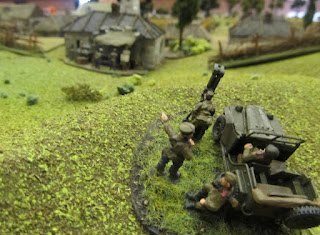 The boss, Colonel Masonov, watching from the ridge via scissor-scope.
Just be ready for the tactical co-ordinations, that would be his main role. 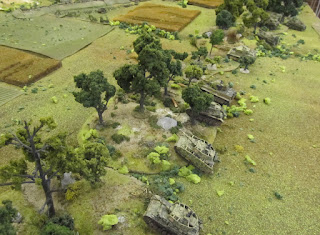 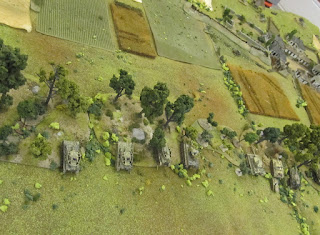 The stream/woods to negotiate first before facing the massed guns. 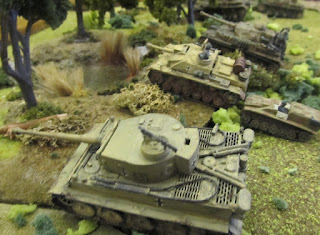 The cutting edge of the wedge. Borgward and HQ behind. 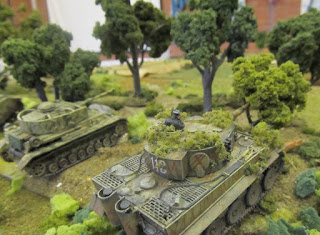 The other edge, better to have two edges than one. 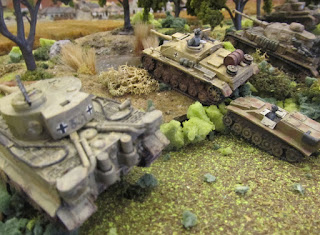 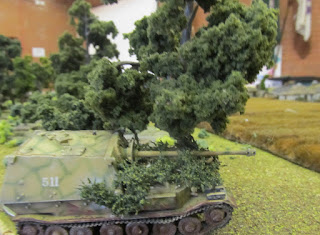 On the right of the line, the Ferdinand (we don't talk about it!).
If we ignore it, it might just go away. 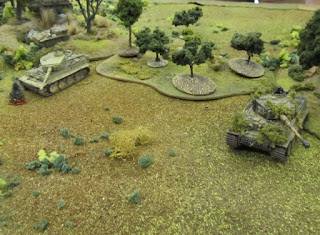 Fronting up for the attack, stop this... the answer, suppressing fire. 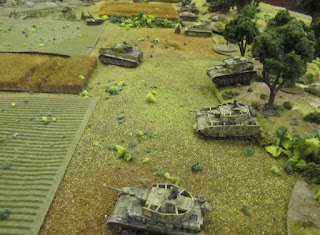 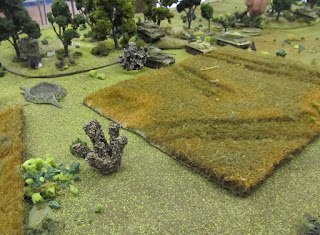 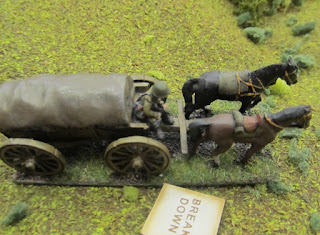 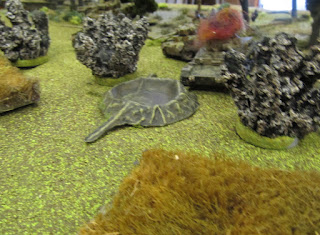 Heavy hitters dial in... first panzer goes up in smoke. 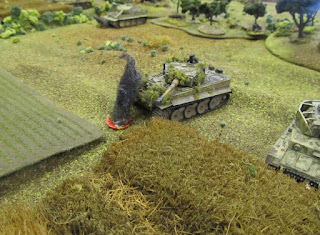 The Tigers are burning... nope, they are just pinned. That'll do instead. 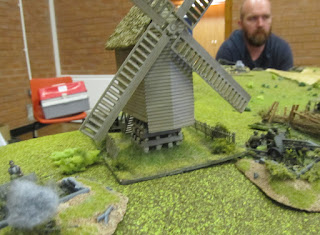 The serious face of Colonel Masonov... can his riflemen hold Teploye? Should he have more proleteriat flapjack or risk the decadent fascist chocolate cake, which looks very tempting? Would it be a betrayal of the revolutionary spirit? 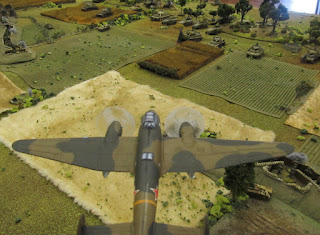 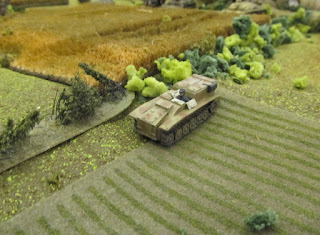 The cheeky Borgward, moments before it was immobiled, to much German wailing. 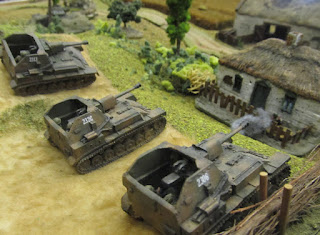 Suka's move up through the cornfield to fire over Teploye. 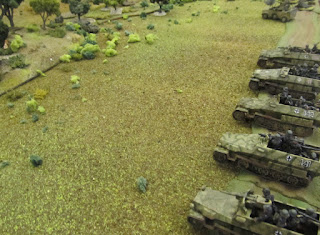 The softer filling inside the panzerkiel arrives behind the woods. 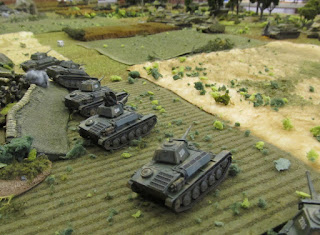 Onward to Berlin! My T-70s start their suicidal charge on the right.
Just a harassing precursor attack before the main event.