Weeks in the planning (and some extra painting), the time has finally come to get lots of the toys out, set-up a big table and go for a big tank-bash with Battlegroup Kursk. It would be nice to see it all on the table once in while, we’ve had these armies along time. This would be a 2000 point game, with the Germans in full attack at the village of Teploye (northern edge of the Kursk salient), trying to capture the village on the forward slopes of the Olkovatka ridge.

The scenario would see the Russia forces would be split, with 1000 points of Rifle Division in their defences holding the village and 1000 points of Tank Corps to counter-attack from reserve (arriving from turn 4 onwards). The Germans had 2000 points of panzer forces to attack with, splint into a first wave and second wave. As it’s a big game (battalion-sized), I’ll break down this AAR into smaller parts over the next week or so, starting with the forces, prep, planning and deployment, etc. Next will come the first half of the action, then the conclusion in part 3.

Here is the Google map of the area. The Germans have already captured Samodurowka, just off the map (to the north), and reached the stream through he wooded area at the bottom of a shallow valley (we didn’t put the stream on the table, just the woods. It was a minor feature, the woods were boggy so difficult ground to all vehicles, that would cover it). The panzers would be attacking up the gentle slope. 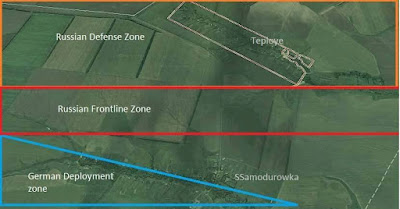 We held Teploye, dug-in to trenches, behind barbed wire and minefields. I’ve included the detailed Russian lists for the game below, I don’t have the full German ones, but it contained 2 Tigers, 1 Ferdinand, 6 or 7 Pz IIIs, 6 Pz IVs (all Gs), 4 StuGs (one controlling a Borgward), and the usual panzer grenadiers in their half tracks or tank riding.

The Soviet plan was straight forwards, hold tight, then the hit them hard with the steel. Get in amongt their armour at short range, pile those tank riders off and cause mayhem with anti-tank grenades. It was actually bit more refined than that.

For the defence the heavy guns and the mortar battery were key, hitting those two pre-registered target points which would be on the woods in the valley were we knew the Germans were mustered. The enemy would have to advance through a constant barrage of explosions which should seriously harass them and get lots of pins (and a few kills). The anti-tank guns would deploy in the gun-pits back on the ridge’s slopes, in pairs. Each pairing would concentrate their fire at one target (the Tigers!) with HE at long range to suppress them (giving 4 chances at a 6 each turn). Only at short range would the guns switch to AP for aimed fire. The two defending infantry platoons would each have a role, 1 would have the village itself, the other the trench lines. The AA cannon must be on Ambush Fire every turn for the inevitable incoming Stukas. The instruction was to get lots of units on ambush fire early and hold fire until the Germans came closer, don’t get draw into an uneven firefight with lots German MGs at long range an dgte pinned (and thus vulnerable to a lightning close assault by armoured grenadiers or, even worse, pioneers using Reserve moves to close in fast), and just stay put in the 3+ cover we’d paid good points for! Via the shortest routes they’d have to clear the mines or go round them, and cross barbed wire, making their attack very slow. By going round it would by us more time for e guns and arty o do their work. We really hoped to win the artillery duel with those counter-battery missions keeping any Nebelwerfers (off-table ones) quiet. I fear the heavy rocket launcher strike, I’ve suffered too much under them before.

For the counter-attack (that’s me this time), the first wave would be the T-70s, a sacrifice to draw German fire, spend their AP shells, stop them moving, and be a nuances with HE fire before the T-34s had all arrived and mustered for one almighty charge forwards, with all the tank riders, as second wave. The Katyusha strike and PE-2 bombing run would precede the T-34 rush (don’t care if they hit a few T-70s), to try and get the enemy well pinned for at least the first turn as we closed in at 24” a turn.

As the scenario allowed it, I would pass over the 3 Suka’s to the infantry forces as their mobile reserve, in case they were struggling anywhere and needed reinforcements before the tanks arrived (from turn 4 onwards at 2D6 units per turn, so it would be a while and random, but patiences to gather them and not attack piecemeal would be required).

With everything planned, the models painted and new defensive positions bought and quickly painted (gun-pits, more gun-pits - thanks Lancer miniatures for the fast delivery).

After an early Sunday start, we set-up the terrain based off the map on a 6x10 table (using my new terrain mat - hurrah). There were 4 objectives placed by us. One on the track on our extreme left (behind the 45mm gun battery position, barbed wire and a minefield). One on Teploye church. One on the windmill on the ridge above the village (our artillery observers home for the day, but likely to draw a lot of fire, but he was emergency back up to the PRTPs) and finally, to draw some Germans away from the village, on our extreme right, covered by a trench line, a detached rifle squad and the static dug-in T-34 pillbox. Weakly held, this we hope would attract some Germans for an ‘easy’ objective, a lure to bring them forwards into our tank-charge, when it arrived. As the Russian placed their defences, the Germans sorted their attack plan between the two of them, divided their force, ammo’d up their tanks with HE and AP, plotted their timed strikes, etc. Their two pronged attack would come on our left, straight at the village over the shortest distance via the cornfields (but blocked by minefields and covered by flanking fire from the three 45mm guns behind their improvised rock and log barricades). On the right, through the fields would come the bulk of the panzers.

A note here on the trenches. Obviously the model terrain sticks up in way that actual trenches don’t, but we agreed, they were all below ground level, did not block line of sight or movement over them at all (being narrow for just 1 man at a time, so tanks could roll right over the without slowing).

The Germans then placed their first wave. Mostly armour, 2 Tigers in the centre, 3 Pz IVs either side, 3 Pz IIIs on the outsides of the wedge (Panzerkiel). Inside the panzers would be the halftracks, behind came the soft-skins. On their right (our left  opposite the village) lurked a 222 armoured car, mortar spotting from the wood’s edge and the mighty Ferdinand (as Russians, we didn’t talk about he Elephant in the room).

By 11 o’clock everything was in place for turn 1. Oh, except for out counter-bombardment (we almost forgot it), for which we rolled a 6! Hurrah, 2 chits to start with for the fascists. Then 3 chits for the objectives we already held (we concede the church as an untenable position, anything in it would be visible from turn 1 and get all the German firepower and die). We also out-scouted them, 2 to 1 (circling PO-2 vs lurking 222). In the pitched battle ahead we’d both decided the recce had little place. 6 counters for them, good start!  Our counter-bombardment pinning resulted in 1 pinned MG team in the woods - rubbish, 20+ dice rolled , one 6 scored, the odds better improve in the game or we’d be in big trouble.

Here are some early shots of the table, etc. Next time, in a few days, the first half of the battle - the stoic initial the defence of Teploye. Hopefully, by the end of the week, if I get time, the armoured counter-attack as the conclusion. We had until 5.30 to finish, so 6.30 hours to play. 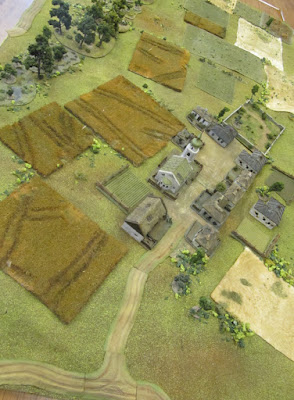 PO-2 eye's view over Teploye village, Russians will be on the right,
Germans through the woods on the left. 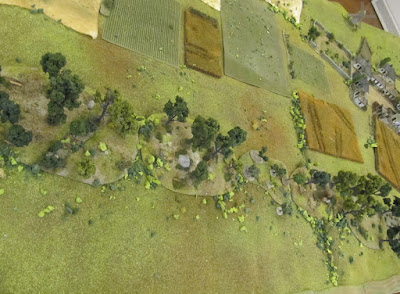 The German woods, the bottom of the shallow valley. Their first obstacle. 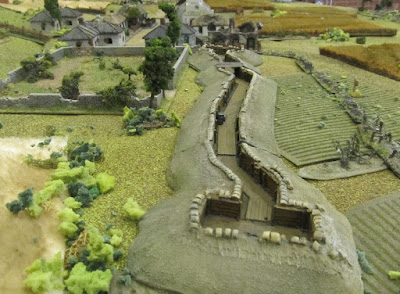 Trenches in the centre, in front of the walled orchard, barbed wire and minefield in front. 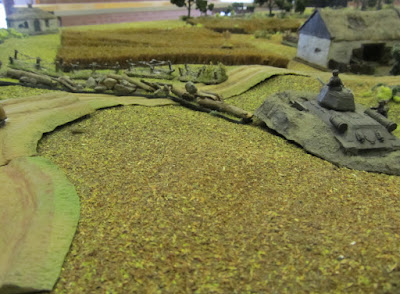 Russian extreme left, barricades and dug-in T-34, this one was a dummy (uncrewed) 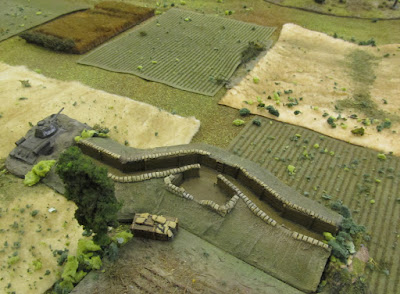 Russian extreme right, trench line and dug-in T-34, not a dummy this time.
Pile of supplies is an objective marker. 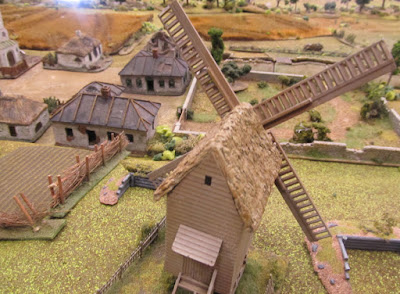 The windmill, an objective and observation point (and target).
Gun pits for Zis-3s on the slope just in front. 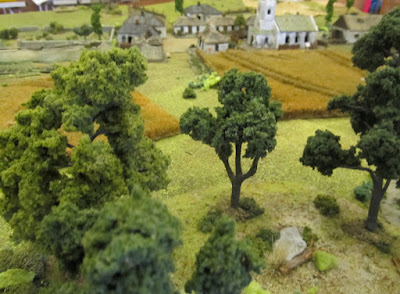 From the woods, through the cornfields to the village. Liberally sewn with mines. 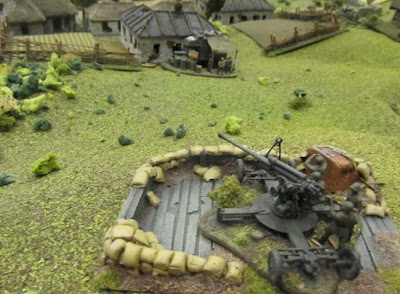 Right at the back, overlooking the village from the top of the ridge, 85mm AA gun, dug-in for ground defence. More long range HE suppressing fire and when the Germans come closer, a good AP shell too.


Bring on the Panzers...