Just a one-off game, 600 points a-side for an amphibious assault scenario, with the Japanese dug-in against a US Infantry Division battlegroup (I don’t have US Marines and can’t face painting another force that so similar - but different).


For terrain, we decide that once off the beach, the entire board was jungle. All units would always be obscured and in at least soft cover, and the many volcanic rocks were hard cover. The big rocky headland dividing the bay (we called it the Rock) was all hard cover. The ‘river’ was a low, slow tidal creek, and not deep, so only difficult ground to cross (unless you’re an amphibious LVT), but provided no cover (but watch out for crocodiles). There were 3 objectives, one on the river banks on the left and right and centrally on top of the hill - the US’ actual target.

With the Japanese scattered through the jungle, but with only their Nikado suicide trops on the far side of the river, hiding in rocks for their ‘operation certain-death’ of attacking the US armour as it got off the beach.


Time to get going. The US got off to a terrible start! Out-scouted and with the Japanese holding 2 objectives, that was 3 counters, then a mortar bomb’s direct hit KO’d an LVT and pinned the units clambering from the wreckage, so 1 for the loss, then 1 to unpin, and that’s 5 counters to the Japanese zero (pun intended) by the end of turn 2. My three AT teams went into action, 1 rushed an LVT head-on and was cut down by MG fire. The second was pinned in the rocks by more tank MG fire, but the third saw his chance as the ‘Zippo’ rolled up the beach. No ambush fire (a mistake), and with the dismounted infantry all just unpinned from their close encounter with the mortar stonk, my guys rushed the tank - ‘Banzai!’. Rolled a 6 and Kaboom!, the Zippo went up in a fireball! Suicide bombers also removed of course!

In return, the US shore fire control team were finally at work, in place at the foot of the Rock, they started to hammer the river line, systematically left, right and centre, using a lot of harassing fire. The shells whistled over and made life along the river line miserable for my cowering riflemen. The USAAF P-51 swooped in and dropped its bombs on the high ground objective, and scored a direct hit on my AT gun… so, no more gun! The Japanese had their first 2 chits.

The US reached the top of the beach, having sprayed a lot of MG fire into the jungle. 2 squads dismounted, whilst the others stayed on board their slow rolling machine-gun fortresses. A M5’s machine guns dealt with the last anti-tank team. Threat eliminated.

Turn 4, my Zero raced overhead, avoided the AA fire from the ambush fire waiting on the LCVPs MGs, and dropped two bombs on the beach and roll, err, double 1 - wow! They were off into the sea, and we decided that doesn’t even count as under air attack - must have been a very rookie pilot. The two LCMs reversed back out to sea to help collect the next wave.

Up on the Rock, where the Alamo scouts had spent the night and were now the back-up forward observers - they had a good view of the river, the Japanese suddenly appeared from their caves. The light mortar squad and an LMG spider hole deployed, to drop a hail of mortar shells on the beach and add to the heavy pinning. The LMG targeted the Alamo scouts and got 1 of them, a mini fire-fight that would continue until only 1 scout remained when the single LMG guys was finally killed.

Return fire up onto the rock was ferocious from LVTs twin pintle MGs, in all directions, just lashing the Rock. My mortars were, in turned, pinned down and then being whittled away, until only 1 knee mortar team remained. As a last counter attack beyond the river my rifle squad emerged into the light and close assaulted his Platoon HQ, but killed only 3… a rude ambush, but their return fire and then the comms relay team and FHQ helped out too (always bad when the HQ guys are in the firefight), but they saw off the last of the rifle squads charge. That could have been better.

By now two LVTs and two M5s had reached the river and been under more mortar fire, which was doing little… gunning engines the Alligators dived into the creek and swam across, both still full of men. On the far side they de-bussed, taking one objective when M5 HE fire (??) KO’d my infantry gun, which had been shooting at them with HE itself as the world’s most useless anti-tank gun. The counters had now evened up, I had 13, the US had 12… very close.

The Japanese tanks had arrived from reserves but the mini armoured counter-attack (I at least figured the tankette could KO an Amtrac) was terrible. First, the tankette having fought its way through the undergrowth, failed to spot and didn’t fire at the Amtrac (dense foliage here), only for an M5 to see it and - 6 - hit. Whammo - dead tankette. The I-Go, well, it broke down on a special counter and did nothing… stuck at the back of the table immobilised. Japanese armour doing what it does!! - useless. Things now looked bad for me. My light mortar squad on the rock was finished off by US BAR and rifle fire, but not before I remember it had an AP rating (of 1) and could damage an Amtrac (one was still on the beach firing at them). Auto spot, roll to hit (direct fire with HE) - Hit. Penetration 1 vs LVT’s armour (rear) of O (the very bottom of the table, don’t think I’ve used it before). Rolls a 10, boom!, right in the back of the Amtrac and it was KO’d… good shot!  Then he died!

The Japanese now had little left. My FHQ on the hill top objective. 3 riflemen pinned on the left and the objective on the river to the right was held by 2 men with an LMG, against a fully loaded Amtrac, fighting its way through the underbrush to get there after wading the river. It would unload 2 squads. That would fall, so another 2 counters there would end it for me. My counter total was at 45.. so bang on.

My last turn, with just 4 orders… with only the FHQ and the LMG team left, so, just another barrage and that would be it. He dropped it over on the Rock, where US infantry had finished mopping up, but a deviation landed it right on the FHQ and his comms relay team. ‘Incoming!’ 3 direct hits! The FHQ was suddenly gone as was the comms team (1 man pinned), and 3 counters inflicted. The US still had 8 BR left, these 3 counters totalled 9! Broken. The loss of the captain and his radio men caused the US attack to pause and pull back. They had got to the creek but the Japanese were not giving it up today, the narrowest of narrow wins, by a complete fluke (and if they hadn’t lost 1 point for the Cautious Enemy, they’d have still been fighting!).

Below are some shot of the action… a really good game, tense at the end with 8 Japanese left, so I’d pretty much given up any hope of a win, even after a great start. The US came back strong, so much firepower. Gotta love an Amtrac, they were beasts… 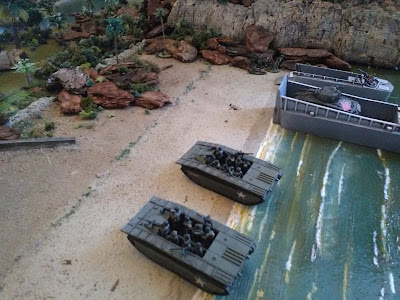 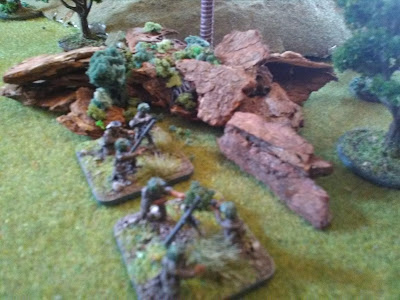 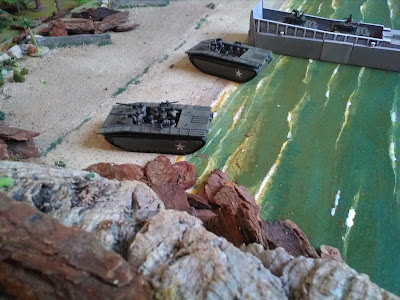 The other side of the Rock 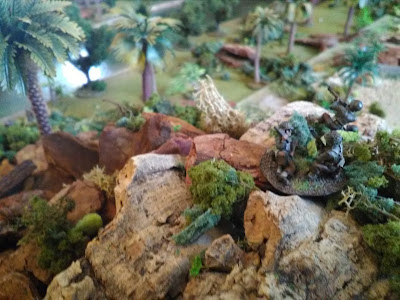 Alamo scouts, up on the Rock, having landed last night. 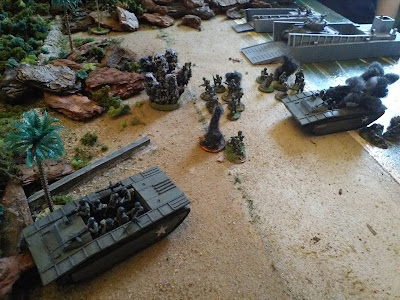 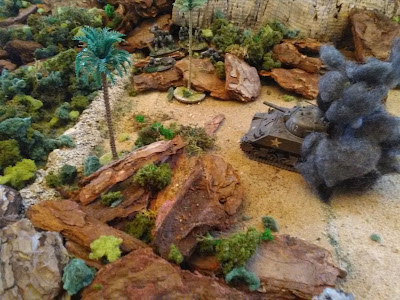 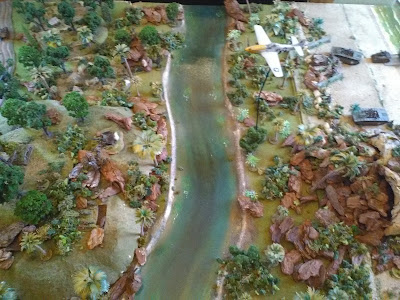 USAAF P-51 drops in, must have long-range tanks on.
I need a naval fighter for this type of game I think. 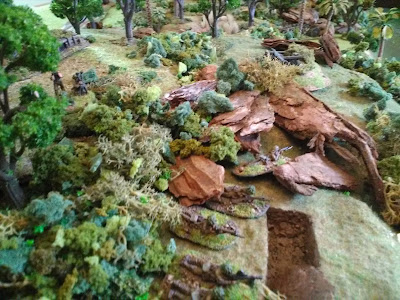 IJN dug-in on the hill objective. Just before the AT gun got a bomb on it! 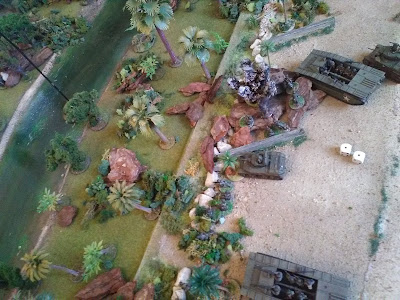 The explosion is the target point of the Zero's air strike. The dice, his bomb's accuracy.
'Zero' is the score out of ten for that effort! Should have been a good shot. 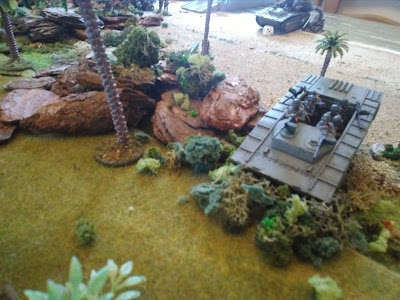 First off the beach. 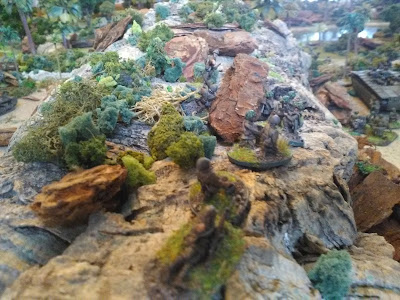 Light mortars appear from their cave, onto the Rock, to start dropping more shells on the beach. They eventually KO'd the Amtrac (top right). 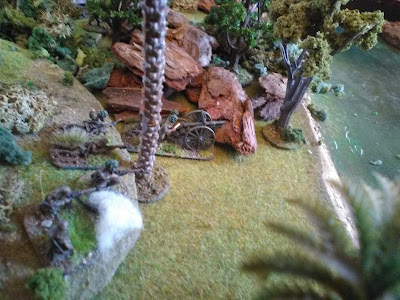 Holding the river line, the infantry gun, used to target M5s, which are Tiger tanks to it. 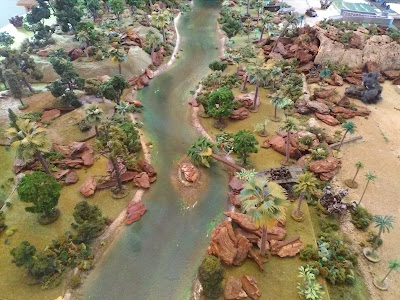 The creek, about to be forded. 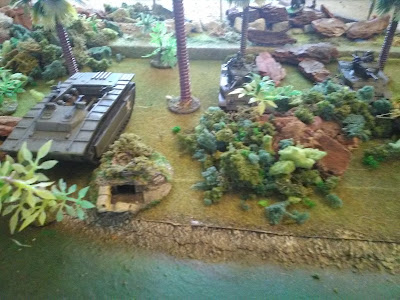 Alligator takes the objective (marked by the little bunker). M5s providing useful HE support fight, that has never been a thing! But 4 37mm HEs shells a turn was keeping Japanese heads down. 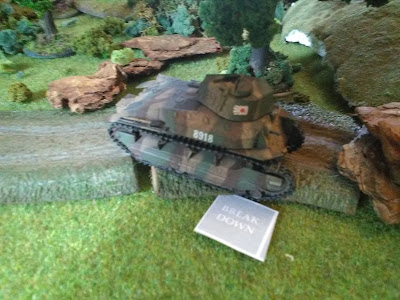 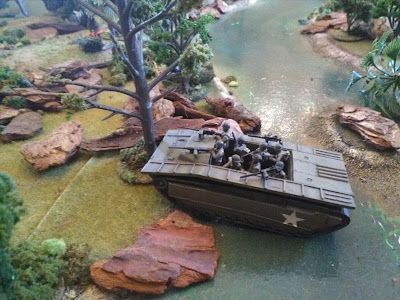 Over the creek and up and out. Still fully loaded. 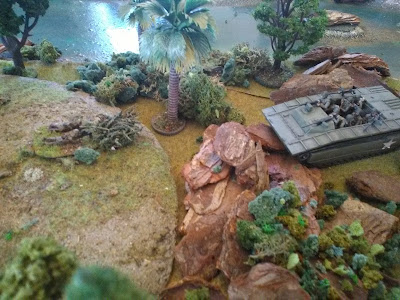 The Japanese right flank, 2 men and LMG holding an objective. About to be overrun when the GIs jump out behind a wall of .50 cal MG fire. 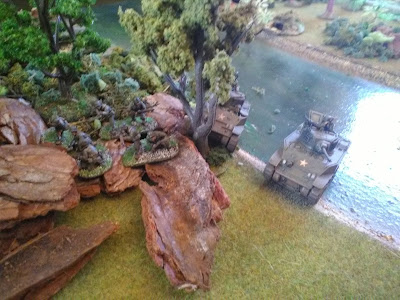 The left flank, they are over and the M5s follow. Here, defended by 3 riflemen, pinned!