A bit of knock-about fun, my youngest has a lock-down project, to get his Scouting hobby badge, so he decided to write a set of wargames rules for his favourite toy soldiers (I have no idea where he got that idea from). He’s been playing around with the ‘HALO’ guys and aliens on his bedroom floor, and how has a set of rules, using D12s(!), so I agreed to do some first play-testing.

We dug-out my Warhammer Realm of Battle desert boards and my sci-fi terrain for our own sci-fi world, Zentauri-Alpha, where the human colonists and miners are under attack from the rival Urtheni Empire, covertous of the planet’s mineral wealth. The human forces are either tough colonist militias or the trained soldier of the 8th UE Shock Regiment, sent from Earth to defend the planet from the increasingly aggressive Urtheni and their army of various enslaved or allied races (the Urtheni themselves are rarely seen, semi-mythical figures with, rumoured, mind-control powers that they use to dominate other races - very dangerous). Their rapidly expanding empire is a major threat to Earth’s far colonies. Enough background… suffice to say, it’s an arid desert world, rocky, with a scattering of human colonies and a lot of human industrial activity (most via automated mines and factories). These are the key locations for the Urtheni’s troops and humans to fight over.

Our game, the Battle of Atrya Ridge, saw the humans and Urtheni clash over the local automated factory works, the alien raiders having just taken it. The 8th Shock Regiment’s heavily armoured troops have been dispatched in their combat-shuttles to drop in and take it back. Fight on.

Here is a bunch of photos from our afternoon’s fun. It didn’t go so well for the 8th… defeated in their assault, they withdrew to be evac’d back to base. For models we use all manner of stuff from various sci-fi ranges, including GW stuff (mostly TAU head-swap conversions), converted old Battletech Mechs, Dreamscape plastics (with replacement Anvil Industries resin helmets), there are some Infinity models that suit and vehicles from other smaller manufacturers too - I love the Antenocitis Workshop scout buggy. 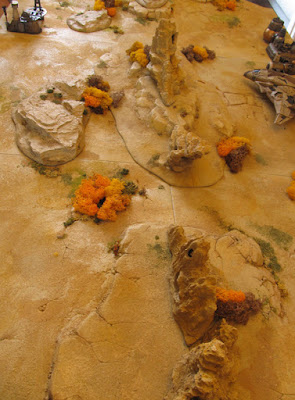 Atrya Ridge, humans attacking along the length of it, to it's left and right. 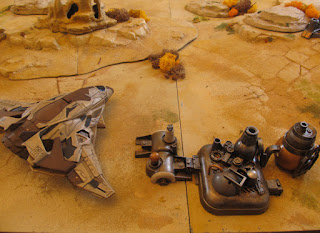 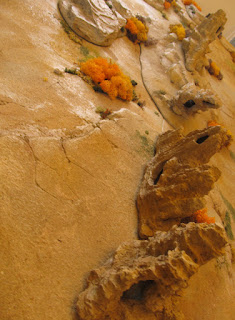 The wind sculpted deserts of Zentauri-Alpha. 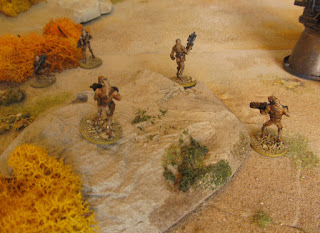 Scouting out the area, before the humans arrive. 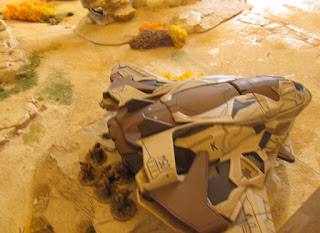 Touch down, first squad out, the lightly armoured colonist militia scouts, but they know the ground. 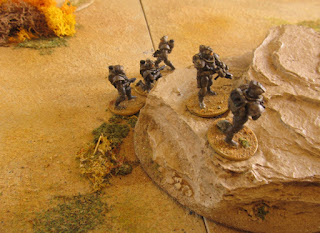 Shock troops HQ squad, air strikes on call for when they spot the enemy. 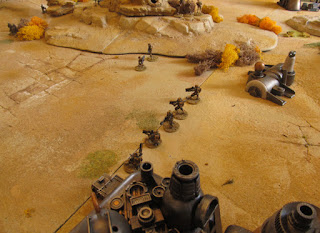 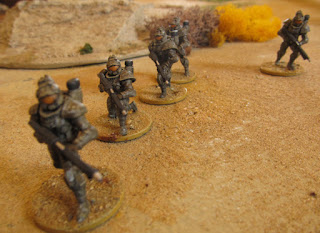 Move out! Heading towards the main extraction unit, and that firing line. 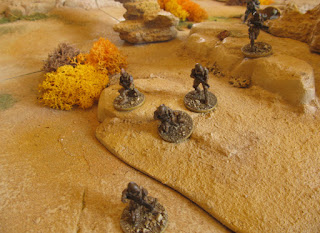 Militia scouts come under the first fire, from the lurking Loor in the rocks. 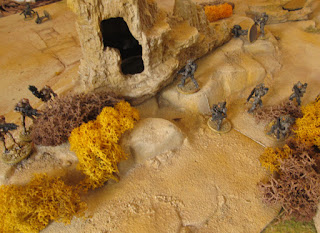 Loor on the ridge, and firefight hots up. But the ferocious desert-native aliens are shot down. 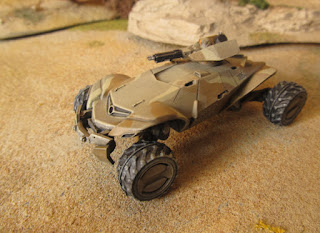 Dune buggy arrives at speed, to add some supporting fire for the shock troops. 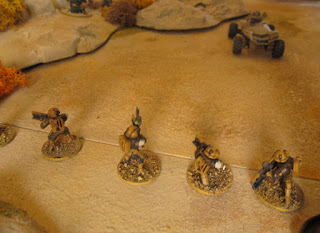 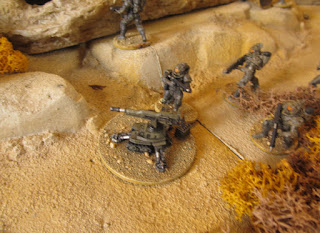 An automated weapon is set up by the 8th (Anvil Industries gun).  Trying to match the Urtheni's advanced weaponry and firepower. 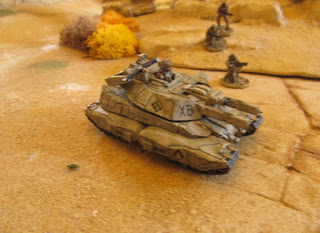 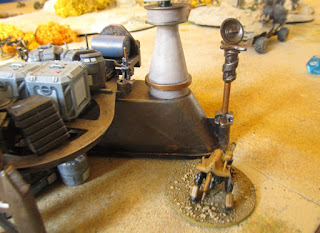 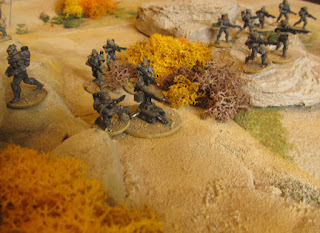 Shock trooper squads in full assault on their left. 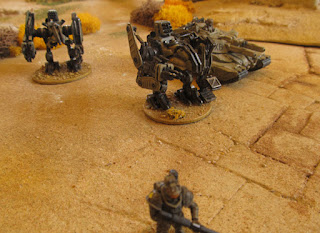 On the right, the human 'armour', the three converted colonist mining robots lead the assault, slow, but tough. They take a beating. 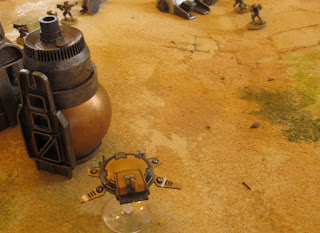 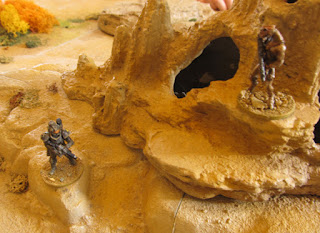 The last Loor scouts stalks the Shock trooper's officer on the ridge. He shot it dead... phew!  Those Loor scouts are cunning and dangerous. 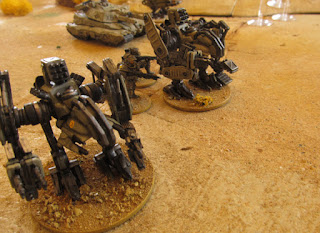 Robots into the assault. 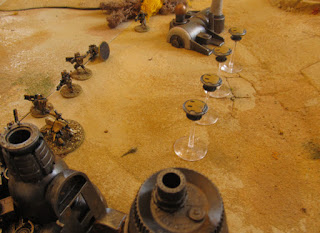 The Urtheni battle-line, issuing a withering hail of blaster fire. 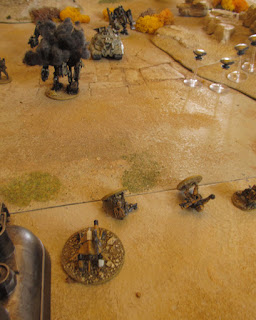 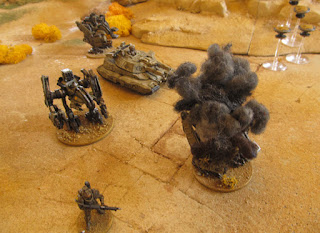 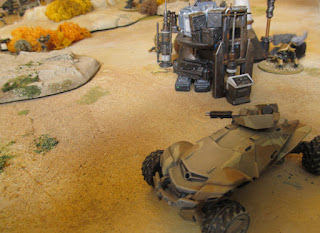 Dune buggy makes it to the supply depot and takes the objectives, and is then destroyed as the Urtheni take back the lost objective. 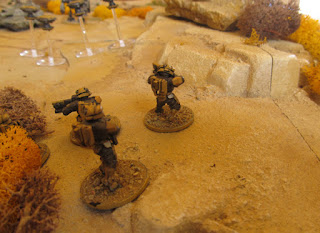 Urtheni slave infantry. They seemingly fight for their strange masters without a care for their own lives. 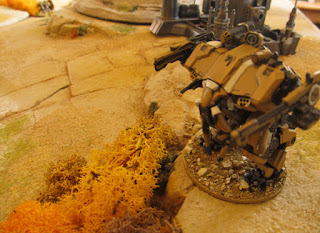 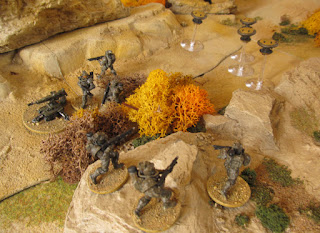 Behind you! Scout drones speed into the rear and surprise the shock troops on the left. 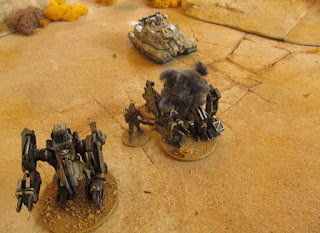 End game, the assault on the right has failed, troopers gunned down, 2 robots destroyed, the 8th pull back. They'll neither objective and the looses have been heavy.