FIREFIGHT AT THE WHITE HART

Played an intro-game of my forthcoming 'Normandy Firefight' rules for a friend, and a cracking evening’s entertainment it turned out to be at the White Hart in Nottingham (not the drinking, the gaming!).
I played the Germans, controlling 4 lowly Landsers, armed with Kar98Ks and a single MP40. My opponent controlled a 5-man American patrol sporting M1 Garands, a Thompson and a M1 carbine. His mission was to locate and search a White Scout Car that had hit a mine and been knocked out whilst carrying an intel-officer. He had to clear it out of any sensitive maps, etc. So he had to get there, search it (we called that a D6 actions) and get away off his table edge again, whilst the German patrol fought to stop him.
The game played out really well, with the Americans advancing by bounds, one on the move with one covering, whilst the Germans fanned out and took a few pot shots to keep their heads down. Braving the fire two GIs pushed through a hedge and rushed the exposed scout car, bullets zinging passed they made it, and, hiding behind it, set too searching inside. Meanwhile, their sergeant kept the Germans pinned with his M1 carbine, trading with the German sergenat's MP40.
In the bocage-lined lane the US officer blazed away with his Thompson and had my single landser pinned in the ditch. When he did try to advance a grenade came winging his way, which sent him diving back into the ditch! That explosion bought the search-team time to fallback (run away!). I managed to hit one, but just nicked him, and he kept running.
The retreat was a bit fraught, a second GI was hit in the chest, but didn’t go down, bravely fighting on with his M1 Garand hammering away up the lane. I tried to throw a stick grenade after the retreating Americans, but it missed wildly and the US troops were last seen sprinting away up the lane, rescued maps in hand.
In the course of the fire fight I lost 1 man killed in action, another wounded and captured (after being treated by the US combat medic who showed up at the end), a third man was lightly wounded but able to withdraw, with just one man surviving unscathed. The US had two wounded: one scratched and one badly with a sucking chest wound!
The rules played well and it was an exciting engagement. The book is back from the printers next week, and should be available through North Star figures soon after that. Also look out for an example-of-play/battle report in WI this month. I’ll be running a Firefight Normandy game at Partizan in May, so do drop by, say hello and take a look.
Here are some shots of the game in progress. 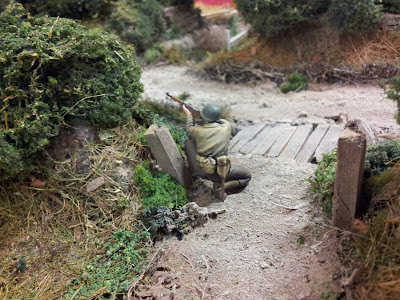 A US GI covering the lane 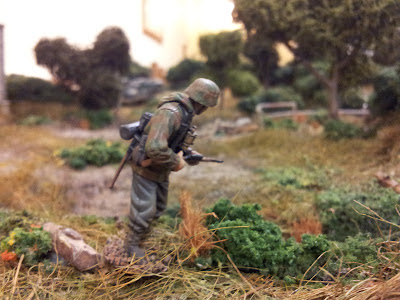 On patrol. A German Landser watches across the fields after deployment. 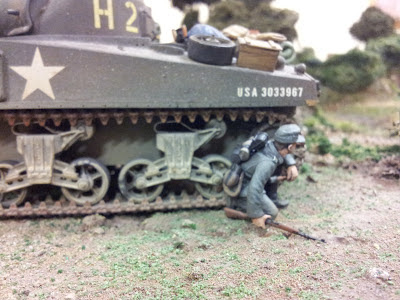 An abandoned Sherman provided good cover on the German's right, but this Landser got pinned there and refused to come out! 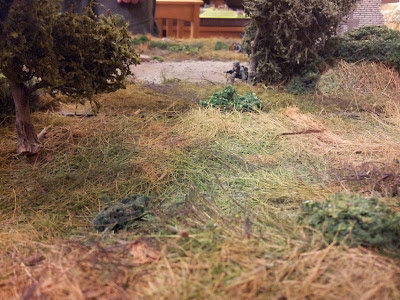 The German Feldwebel sneaks into the orchard, covered from far behind. 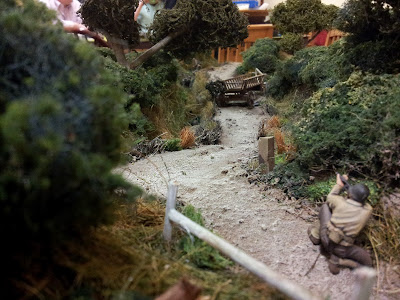 The US Officer cautious covering the bocage-lined lane. Beyond the farm cart is a camouflaged German! 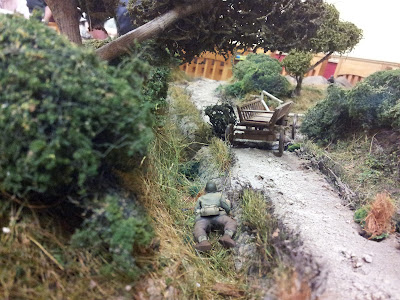 A GI keeps low during the fire fight along the lane, when he knelt up he got shot through the chest!
Posted by Warwick at 07:44