Friday night saw a chance for me to give my completed Russians a run out in a Kursk Attack/Defence scenario. It was a small-ish game (to have a hope of finishing), with the Russians dug-in to their trench-line and bunkers with the German blitzkrieg in full attack.
I used an infantry-based force of two rifle platoons (one on the right, one on the left), supported by 2 dug-in T-34s, a 45mm anti-tank gun, maxim MG, 18” of trenches, 2 bunkers a few stretches of barbed wire.
The German panzer attack would consist of a Pz III squadron, and panzer grenadier platoon in trucks supported by a light and medium mortar team and a tripod mounted MG34. The main threat would be the single Tiger tank (also the supreme commander), with a timed 105mm barrage due to impact on turn 3. 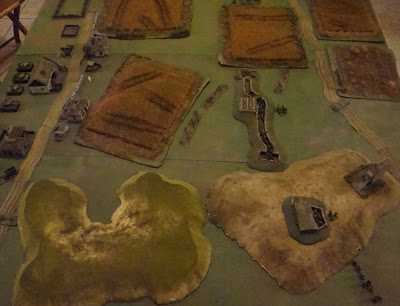 Somewhere on the steppes of the central Russian uplands. Trenchline in the centre, anti-tank bunker on Point 70.2 in the right foreground.
Having deployed my defenders in my half of the table, the Germans began their attack moving through a small village, with the Panzer IIIs on their left, facing-off the two dug-in T-34s. The Tiger was in the centre, hanging back to uses its long range hitting power, whilst the full strength of the panzer grenadier platoon would advance on the right to attack my anti-tank gun in its bunker on top of Point 70.2 (an objective).
I deployed first platoon on the left, 3 squads in the trenches and bunker and 1 hanging back in reserve, platoon HQ observing from the windmill on the hill. Second platoon were hunkered down in the cornfields on the right, protecting the dug-in T-34s, again 3 squads forwards and 1 held back as a reserve.
The Germans began by launching a fusillade of HE at the T-34s to suppress them, not trusting their 50mm guns to penetrate my dug-in armour. This would continue throughout, as the PzIII unleashes all the HE they had to keep the T-34 crews shaken.
In the centre the Tiger predictable moved into position in the village,  took careful aim, and its 88mm tore a T-34 apart. Little I had could touch that beast! 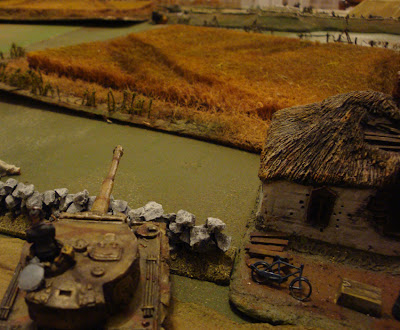 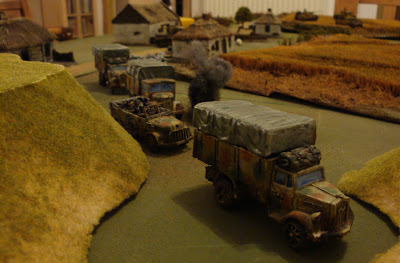 The panzer grenadier platoon's trucks move up under MG fire. 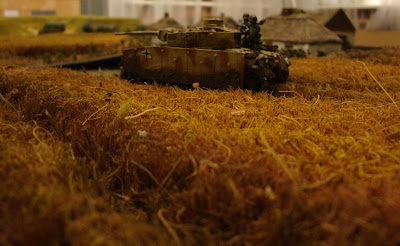 Panzer III on the German right, dueling with the T-34s.
The crux of the battle would the infantry fight on my left, defending Point 70.2 and its bunker. The panzer grenadier’s trucks advanced under long-range Maxim MG fire into the safety of a ravine and disembarked all their squads, machineguns and mortars before they emerged over the ridgeline, two rifle squads pressing forwards supported by hails of fire from their 4 machine guns and 2 mortars. This kept the Russian heads down, although my bold anti-tank gun crew returned HE fire across the hillsides. I quickly moved both my reserve rifle squads to support my left, advancing to engage at close range, which stalled the German advance in the valley between both hills. 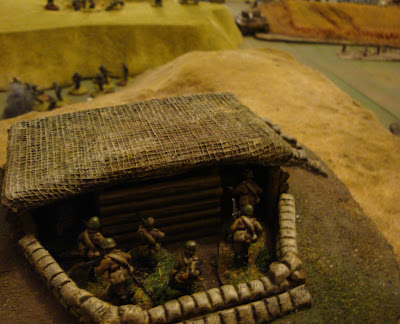 The focus of the German attack, my anti-tank bunker (and supporting rifle squad), the Tiger has just advanced to engage. The assaulting German squads are held up in the valley below.
The fight there developed into an attrition of suppressing fire, my squads being suppressed, then the Germans, and neither side getting anywhere fast.  Even the German’s timed 105mm barrage impact did little damage, and it seemed the objective wouldn’t fall. It was obvious the grenadiers needed some heavier HE support, so the Tiger swung around to aid them. 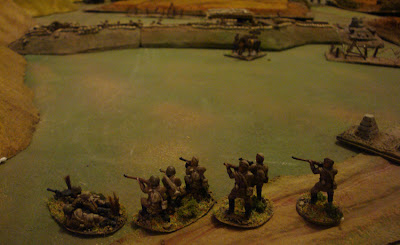 One of my reserve rifle squads heading towards to Point70.2 to assist the defenders. 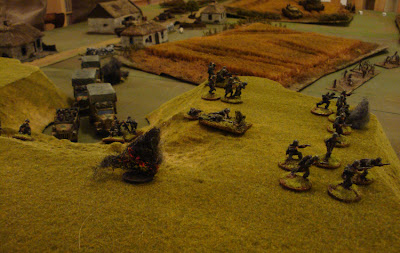 The grenadiers and supporting MGs press out of the ravine towrads Point 70.2.
Most of the suppression was caused by my 45mm anti-tank's HE.
On my left I pushed my infantry forwards to threaten the Pz IIIs. One German tank then hit by T-34 fire and destroyed, and another survived 3 76.2mm impacts which all failed to penetrate (curse my dice). My infantry could have swarmed the Panzer IIIs, but had no anti-tank weaponry (magnetic mines required next time!). They contented themselves with throwing grenades and Molotov cocktails at close range and keeping the enemy tanks prowling the field well-suppressed for most of the game. 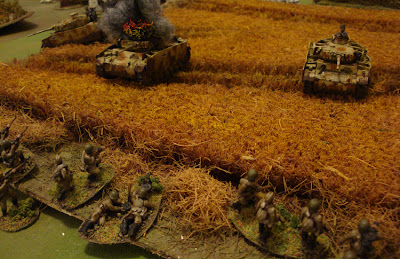 My infantry harrass the Panzer IIIs at close range, suppression at close range was their only option,
but it worked OK!
It was stalemate, and the defenders seemed to be holding, but then a few bad turns for me changed it. On the German left the panzer grenadiers support fire was gradually wearing me down, and the Tiger was hammering the bunker with 88mm HE shells, then the German’s two rifle squads braved a hail of Maxim fire to assault up the hill and into the bunker. In a bitter battle the anti-gun crew heroically fought off the first squad, but my defending infantry squad took heavy losses and broke, abandoning their position (somebody report them to the commissars!). Unluckily, I drew a 4 counter, and that just broke me!
With Point 70.2 about to fall to the Tiger and outflank the entire trench line the Russians turned tail and fled...so much for the motherland! Another narrow defeat.
It had been a slow grind for the Germans, but even when it seemed like there was no way through they kept to their plan and their machine guns and mortars slowly had an effect over 3 or 4 turns -  sometimes you just need to persevere. My casualties totally just 13 infantry and 1 T-34. The German’s even less, 6 infantry and a Pz III, the vast majority of morale loss came from removing suppression, which goes to prove how important suppressing fire can be.
Posted by Warwick at 05:55